AS GUERLAIN CELEBRATES A MILESTONE ANNIVERSARY, WE REFLECT ON ITS PAST, PRESENT AND FUTURE.

There are few houses that reach an anniversary as great as almost two centuries, but this year fragrance and cosmetics brand Guerlain does just that as it celebrates 190 years.

A momentous milestone, the occasion marks almost two hundred years of creation for the French house. A family brand that has been passed from generation to generation Guerlain has an immensely strong family heritage that perhaps is what makes it as successful as it is. With over 1,100 fragrances created to date, as well as ongoing make-up and skincare offerings, Guerlain is one of the most recognised luxury beauty houses in the world today. 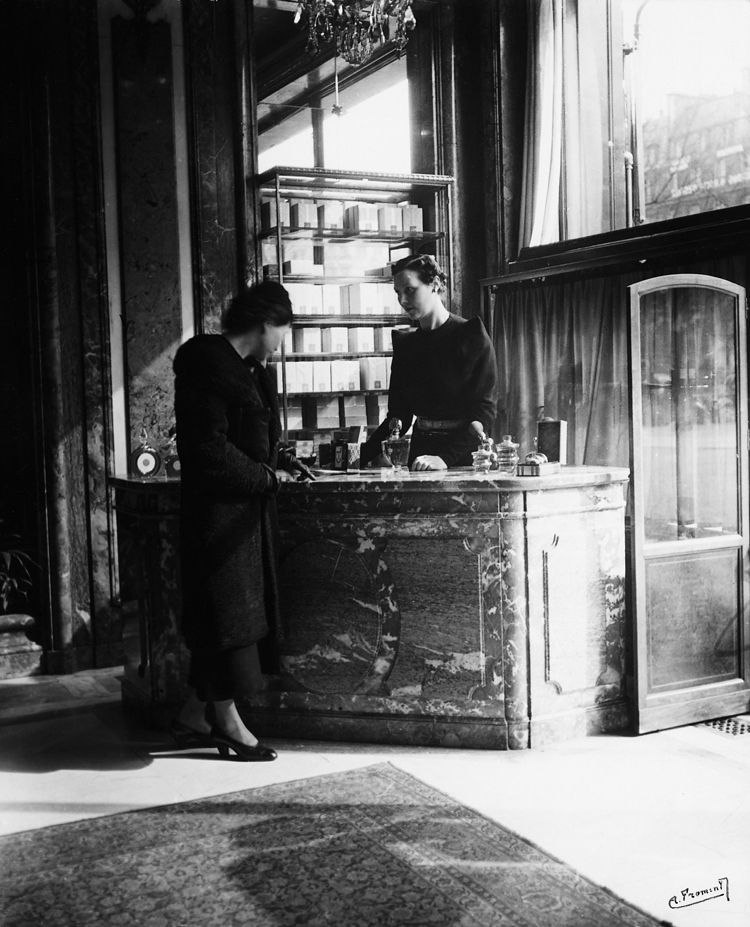 Archive image from the Boutique at 68 Champs-Elysées

Founded in 1828 by French perfumer Pierre-François Pascal Guerlain, Guerlain is one of the oldest fragrance houses in the world. The first Guerlain store opened on Rue de Rivoli in Paris and as the founder and first perfumer of the house, Pierre-François composed and manufactured custom-made fragrances with the help of his two sons, Aimé and Gabriel. At this time the French perfumer had no idea of the success that was to come.

In 1840 Guerlain opened a flagship store, on the prestigious rue de la Paix in Paris. This firmly made its mark on the Parisian fashion scene and allowed the house to reach a larger clientele. In 1853 Guerlain reached new heights with the creation of Eau de Cologne Impériale for French Emperor Napoleon III and his Spanish-French wife Empress Eugénie. This perfume earned Pierre-François the prestigious title of being His Majesty’s Official Perfumer. After this Guerlain continued to attract many high-society clients including Queen Victoria and Queen Isabella II of Spain. Thanks to the high quality and exclusiveness of its fragrances Guerlain could offer clients something unique with a truly personal service. 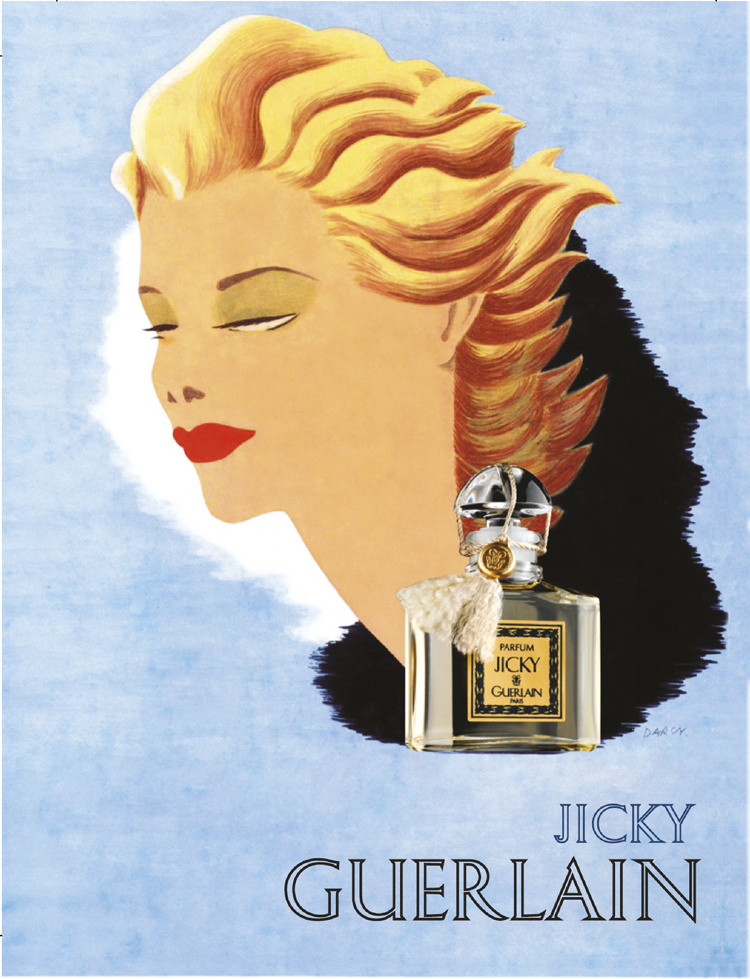 With the death of Pierre-François in 1864, the house was left to his sons Aimé Guerlain and Gabriel Guerlain. The roles of perfumer and manager were divided between the two brothers, with Gabriel managing and further expanding the house, and Aimé becoming the master perfumer. This new generation went on to revolutionise the industry in 1889 by creating the first fragrance combining natural and synthetic ingredients. Named Jicky, the scent was the first described as a “parfum” and marked a moment in history allowing new fragrances to be created thanks to the use of synthetic ingredients. Aimé was also the creator of many classic compositions, including Fleur d’Italie in 1884, Rococo in 1887 and Eau de Cologne du Coq in 1894. 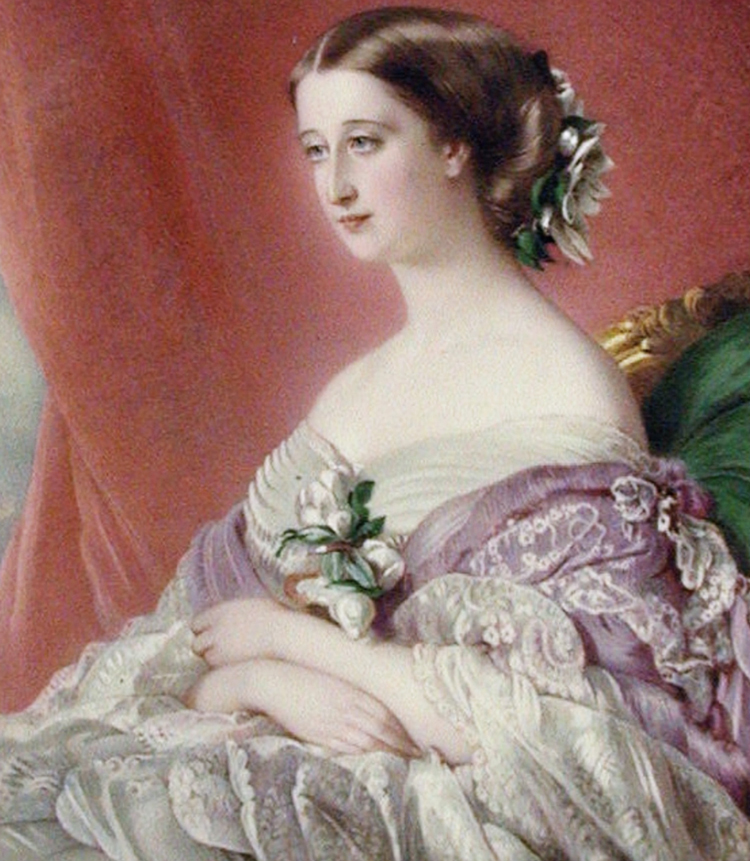 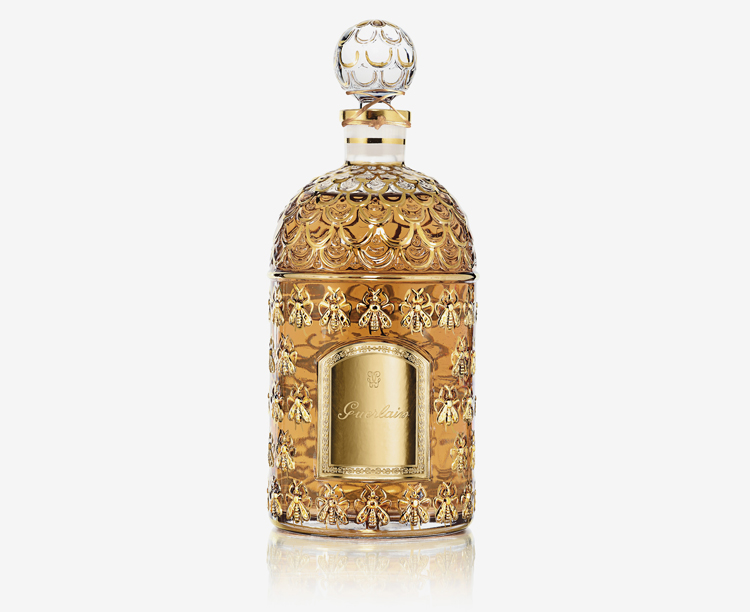 “IN 190 YEARS, GUERLAIN HAS TAKEN ROOT IN OUR MEMORIES AND SPREAD ITS WINGS ALL AROUND THE WORLD.”

Laurent Boillot, CEO of Guerlain since 2007.

Continuing the family tradition the reigns of Guerlain were handed down to Jacques and Pierre Guerlain; the sons of Gabriel. This third generation saw some of Guerlain’s most iconic perfumes. With Jacques Guerlain as the master perfumer he developed fragrances including Mouchoir de Monsieur, Après L’Ondée, Mitsouko, and Shalimar (Guerlain’s flagship fragrance). Once again the role of master perfumer was passed through generations with Jacque’s grandson Jean-Paul Guerlain taking over as the last family master perfumer. In 1994 the Guerlain family sold the house to LVMH. Jean-Paul Guerlain worked alongside other perfumers from 1994 who were brought in to support the brand. Jean-Paul Guerlain retired in 2002, but continued to serve as advisor to his successor until 2010. 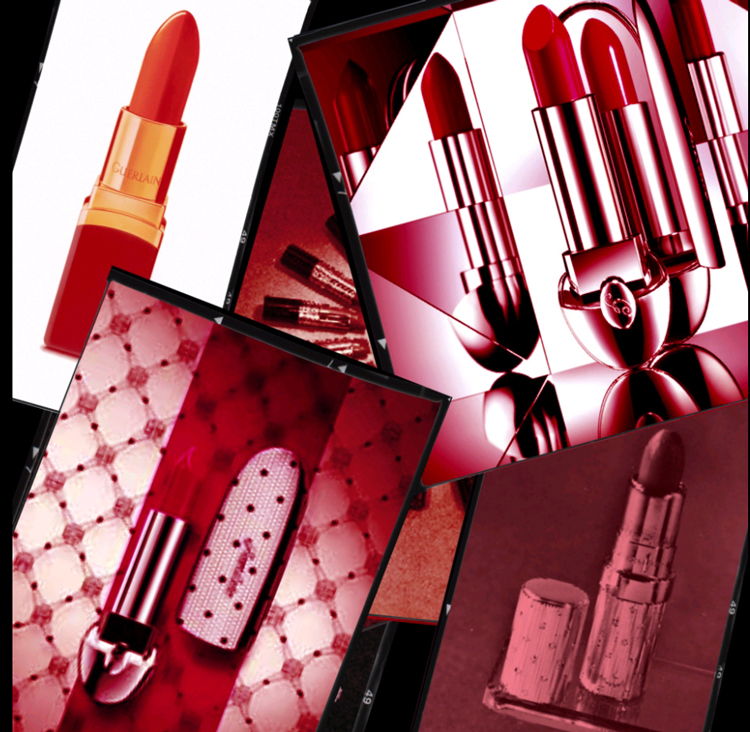 In 2008 Thierry Wasser was named the in-house perfumer. The first perfumer not to come from the Guerlain family, Wasser was Swiss born and worked closely with Artistic Director Sylvaine Delacourte to further Guerlain’s cosmetics offering as well as fragrance.

For Guerlain, the bottles and cases have always been a key part of the brand’s aesthetic. Above all they are objects of art, inspiring craftsmen to achieve the wildest technical feats. The Shalimar bottle even obtained first prize at the International Exhibition of Decorative Arts in 1925 while many other fragrance bottles and cosmetic packaging’s have become unique icons for the brand.

Jicky was a ground-breaking fragrance when it was created by Aimé Guerlain in 1889. The fragrance was the first to use both synthetic and natural ingredients in its recipe. The quadrilobé bottle evokes an alchemist’s bottle and owes its name to its stopper carved from a solid block to obtain a four-lobed shape. 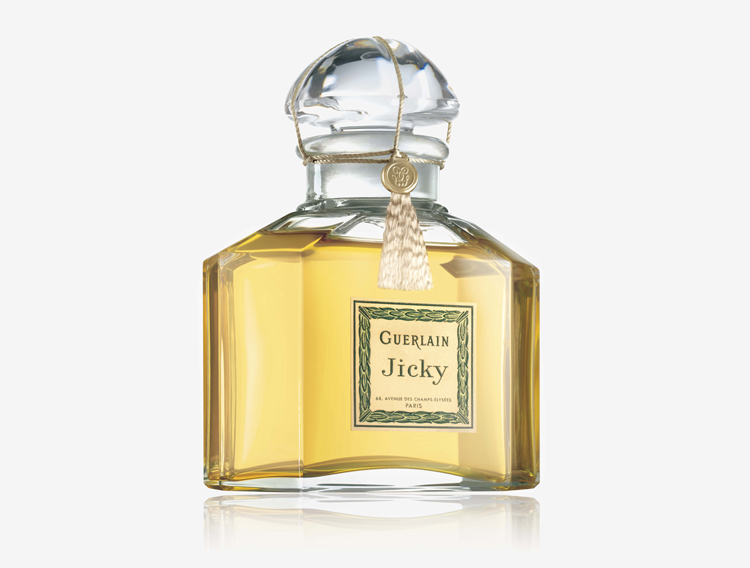 Pierre-François-Pascal Guerlain composed Eau de Cologne Impériale for Her Majesty Empress Eugénie, wife of Napoleon III. It came in a bottle decorated with a myriad of bees hand-gilded with fine gold. Charmed by this creation, the Empress bestowed upon him the coveted title of Parfumeur Breveté de Sa Majesté, Royal Perfumer.

One of the first avant-garde skincare products, Crème à la Fraise. Presented in a white porcelain jar the cream was designed to moisturize and freshen the face. The pot was decorated with the Guerlain emblem of the “woman with flags”.

In 1870 Guerlain created its first lipstick, an original invention consisting of a stick housed in its own tube. The idea came to Pierre François Pascal from a cousin of his that made candles. The gracious object was made using scented pink candle wax. Presented in a rechargeable case with a retracting mechanism, Ne M’oubliez Pas became the first modern lipstick in history. This then became the inspiration for the fragrance of the same name that was released by the house in 2016.

One of the few fragrances that has remained available since its first introduction in 1919. Mitsouko was created by Jacques Guerlain. Its name is derived from the French translation of a Japanese female person named Mitsuko.

Created by Jacques Guerlain, Shalimar was the first oriental fragrance from the brand. Inspired by the love story of Emperor Shah Jahan and his love for Princess Mumtaz Mahal for whom the Taj Mahal was built. The scent was the first of its kind and was considered unique because of the complicated concoction of ingredients. The bottle was the first time Guerlain partnered with baccarat on a fragrance bottle. 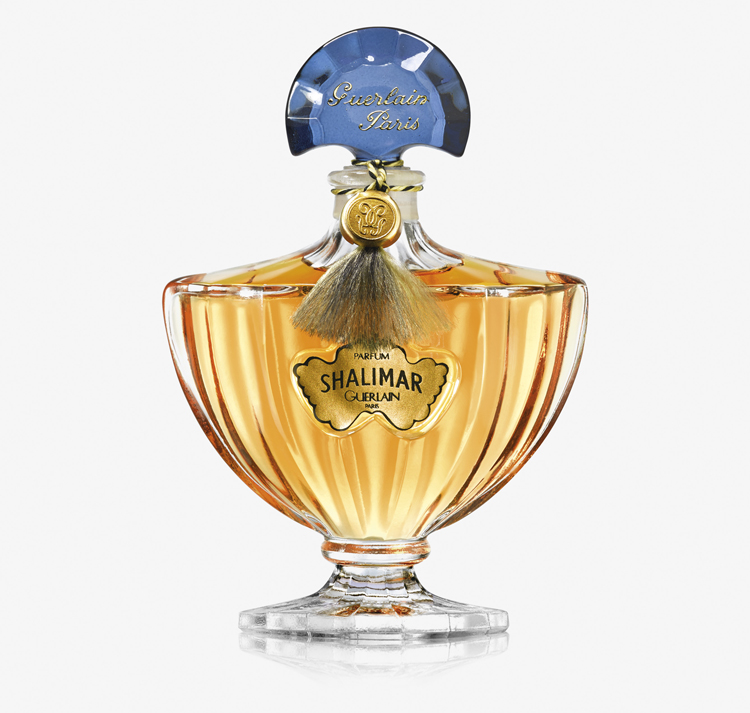 Guerlain’s Terracotta range was created in response to the trend of tanning. Inspired by a trip to the heart of the desert, it captures all the reflections of the sun and lights up the complexion with an instant natural healthy glow. It has become a modern icon of Guerlain’s history. 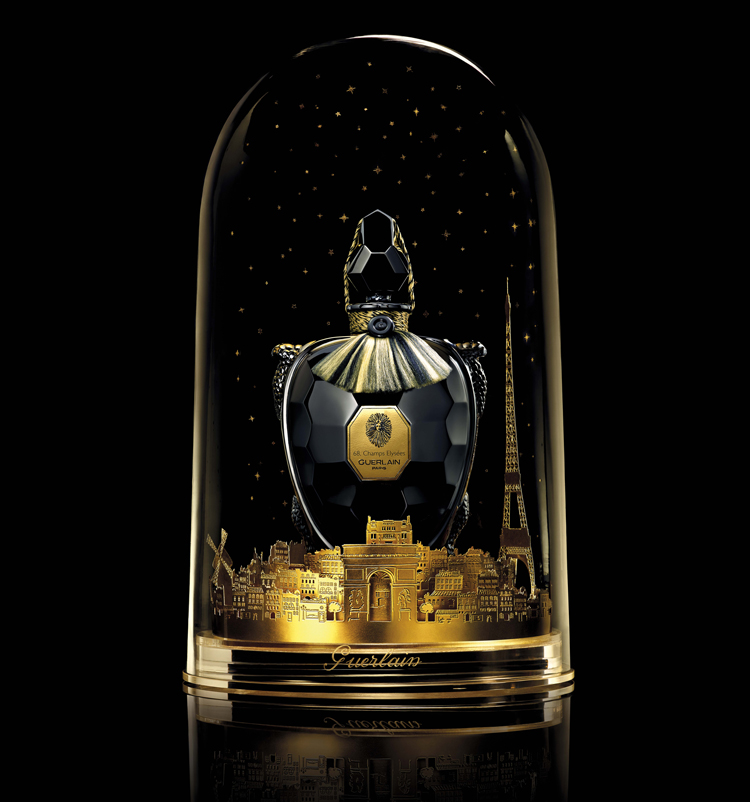 TODAY AND THE FUTURE

To celebrate the 190th anniversary Guerlain has joined forces with Baccarat to create a unique piece. Master Perfumer Thierry Wasser has created a celebratory fragrance that features the house’s bee icon. Guerlain has a decades-long partnership with the fine-crystal glassware manufacturer. Baccarat has worked on designer bottles for fragrances including Quadrilobé and Shalimar. The two houses have shared a passion for beautiful objects and the desire to keep unique know-how alive.

To continue the collaboration Guerlain and Baccarat are releasing carefully crafted pieces in the Exclusives family. Showcased in unique creations such as the Eternal Bee or the rerelease of Guerlain’s iconic bottles, Baccarat crystal magnifies the perfumer’s art. Bespoke Fragrances, a long-standing service provided by Guerlain, are also presented in crystal Quadrilobé bottles.

The celebratory fragrance combines Double Absolute concentration with contemporary top notes of orange, orange blossom and almond with a more traditional Guerlinade in the base notes, featuring benzoin tincture, sandalwood and ylang-ylang. A special edition of the fragrance is encased in The Eternal Bee and is created in a limited number of pieces, all of which are numbered.