Dior presented its Cruise 2021 collection in the historic location of Seville, Spain. 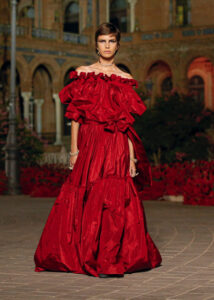 The icon of this collection is Capitana, the name given to Carmen Amaya, a now-iconic Spanish flamenco dancer. Her elegance and grace were the starting point for the pieces. Amaya was the first dancer to express freedom of movement through this type of dance with her revolutionary moves and as well as being the first female dancer to dress in outfits that had previously only been worn by men. 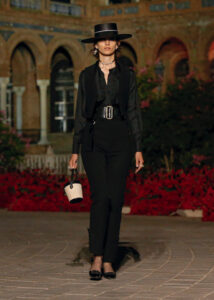 With that in mind, Chiuri combines playful feminine creations with structured masculine pieces for a juxtaposition of genders, creating a modern collection that is reflective of the times. 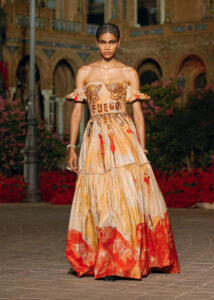 Spain has been a strong influence on the House of Dior beginning with the 1956 Spring/Summer haute couture collection for which Christian Dior designed the Bal à Séville dress; an ode to Spanish tradition. 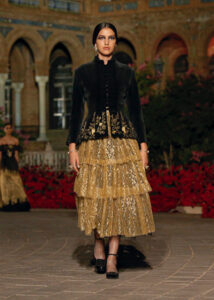 Among other references, the looks evoke the Duchess of Alba, a legendary character who rode horses with Jackie Kennedy in a short jacket, high-waisted pants and a wide-brimmed hat worn on an angle. But also, red, black, and mantillas. Elsewhere, the abundance of embroidery that adorns the venerated Madonna della Macarena’s gowns takes on the role of a sacred ritual in a choreography that suspends the body into an iconic image. 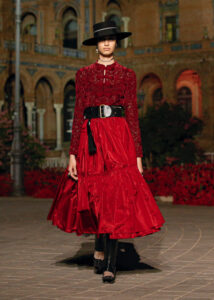 Trimmed boleros made the silhouette even more slender; while sleeves flared out like capes. Shimmering taffeta – in red, yellow, ochre, and black – was sculpted into exuberant skirts that symbolize both Dior and Spain. 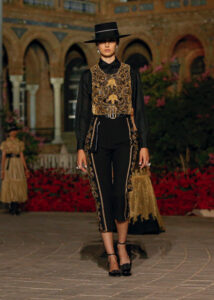 The iconic Bar jacket is reinvented once again, this time in black velvet embroidered with various gold threads. 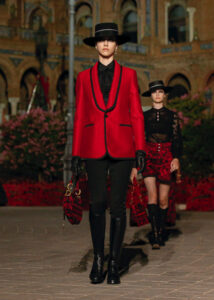 As usual for the House’s on-location presentations Maria Grazia Chiuri has spent a lot of time getting to know the local artisans and traditional handicrafts of the region, offering up the opportunity for these old-age traditions to be showcased to the world.