Your Comprehensive History of a Turban

A&E DISCOVERS THE WAY THE TRADITIONAL TURBAN HAS EVOLVED INTO A FASHION ACCESSORY AND WHETHER, IN TODAY’S SOCIETY IT IS APPROPRIATE TO CALL IT THAT?

A turban is, by definition, a long cloth or scarf that is twisted and turned around the head. The wrapped folds produce a tight fitted effect on the head. Length, style, colour and fabric may vary according to cultures and geographical locations, but the basic concept and construction of the turban remains the same.

What has changed however is the connotations and reasons behind wearing this headgear. Traditionally the turban was designed and worn for religious reasons. Particularly in parts of Asia, Africa and the Middle East. Sikh men wear traditional fitted turbans to show a representation of their religion or faith, and other religions and communities also choose to wear different styles of turban. In recent years, a modern draped version of the turban can also be worn as a fashion accessory. While sometimes controversial, the turban has been a prominent fashion accessory with women for many decades and is especially prominent when travelling abroad.

The earliest evidence of a turban-like garment is from Mesopotamia, a historical area in West Asia. A royal sculpture dating back to the year 2350 BC was first seen wearing a turban. According to these dates the turban was therefore used before Islam and Christianity – suggesting that it cannot necessarily be said to have evolved from purely these religions. Sculptures for Central India in 100 BC also provide visual evidence of the use of turbans. The headgear was originally worn by royalty and spiritual leaders and used to signify power. Turbans in this day were often adorned with jewels and accessories to display wealth.

While turbans can feel modern and fashionable, it is extremely important to remember the symbolic significance they have to many religions and cultures. For many, the turban is a way of identifying themselves with a certain culture or group, and it shows a dedication to a particular way of life. In many cases the turban signifies respect and honour and is a valuable part of a man or woman’s life. Turban’s in religion are treated with such respect that it is seen as an insult to pick up another man’s turban. When used for religious purposes even the way a turban is wrapped or fastened signifies something about the person wearing it. How tightly it is worn, how the ends hang and even the type of folds created by the wearer have deep connotations and meaning. 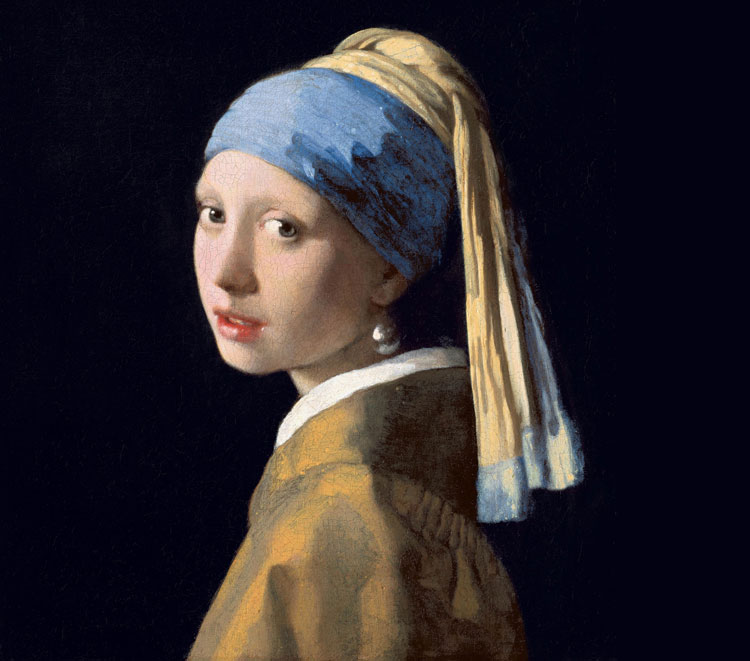 Girl with a Pearl Earring

The first documentation of the turban being worn as a fashion accessory was in the iconic Dutch painting Girl with a Pearl Earring. Painted by artist Johannes Vermeer in 1665, the oil painting features a European girl wearing an exotic dress, a large pearl earring (hence the name), and a turban tied around her head, thought to be inspired by Turkish traditions of the time. This now iconic painting was even made into a film in 2003 starring Scarlett Johansson and Colin Firth which consequently revived the styles of wearing this particular type of turban. 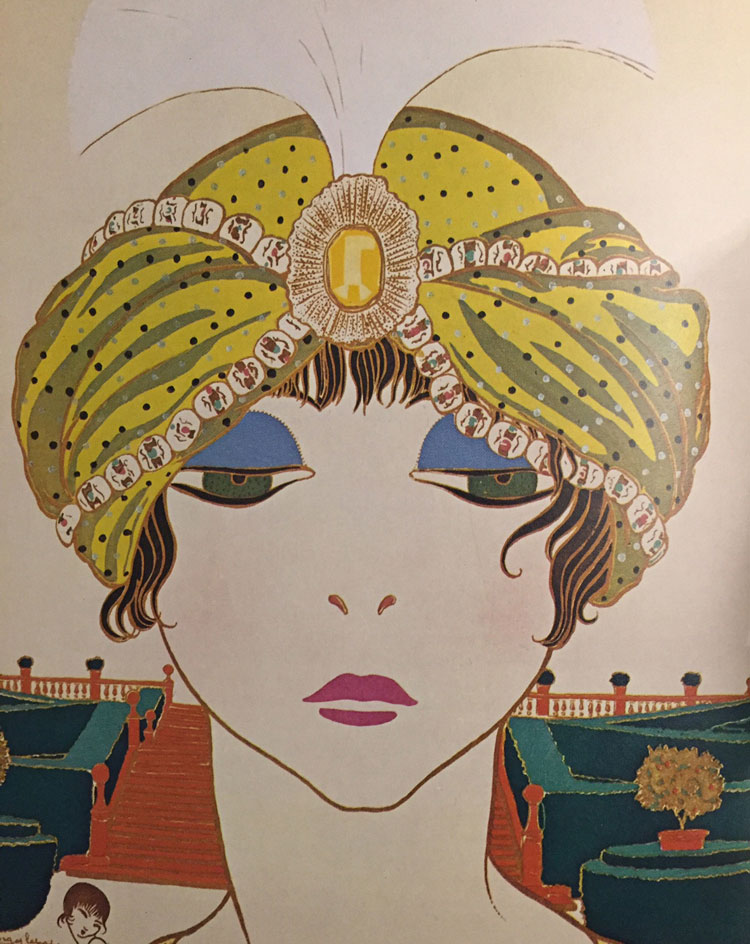 Turban design by Paul Poiret in the 1920s

During the 18th and 19th centuries the turban’s popularity grew. It was the draped variety that dominated the fashion scene. More relaxed and without religious connotations these turbans became increasingly popular with women. The Regency era – a fashion said to be inspired by the increased trade with India, took hold of the turban style, making a statement of class and wealth. In these days the style of turban was initially simple, but as its popularity grew and hair styles became more elaborate so did the styles of turban. The headpieces would often be decorated with jewels and worn to evening balls and functions.

Fast forward to the 20th century and the turban was revived as a fashion accessory once again. Fashion designer Paul Poiret, who was known as the ‘Sultan de la mode,’ was said to revive the ‘oriental’ turban during the early 1910s. Poiret was a fan of the Victoria and Albert museum and he would visit to admire its collection of antique turbans. From here he took inspiration to revive the fashion statement once again. With the introduction of cars and motorcycles in the 1920s the turban grew in popularity, more thanks to its functionality than style, and its ability to control a woman’s hair when travelling in a car. Turbans were often made of silk or velvet and adorned with feathers or brooches.

Even throughout the war the turban remained popular. It was a design that could be created with minimal sewing skills and when time was an essence during the war it was functional and served a purpose when shampoo and hair products were rationed. After the war the turban made it to Hollywood. With actresses including Greta Garbo, and Gloria Swanson wearing turban designs by French milliner Madame Paulette. 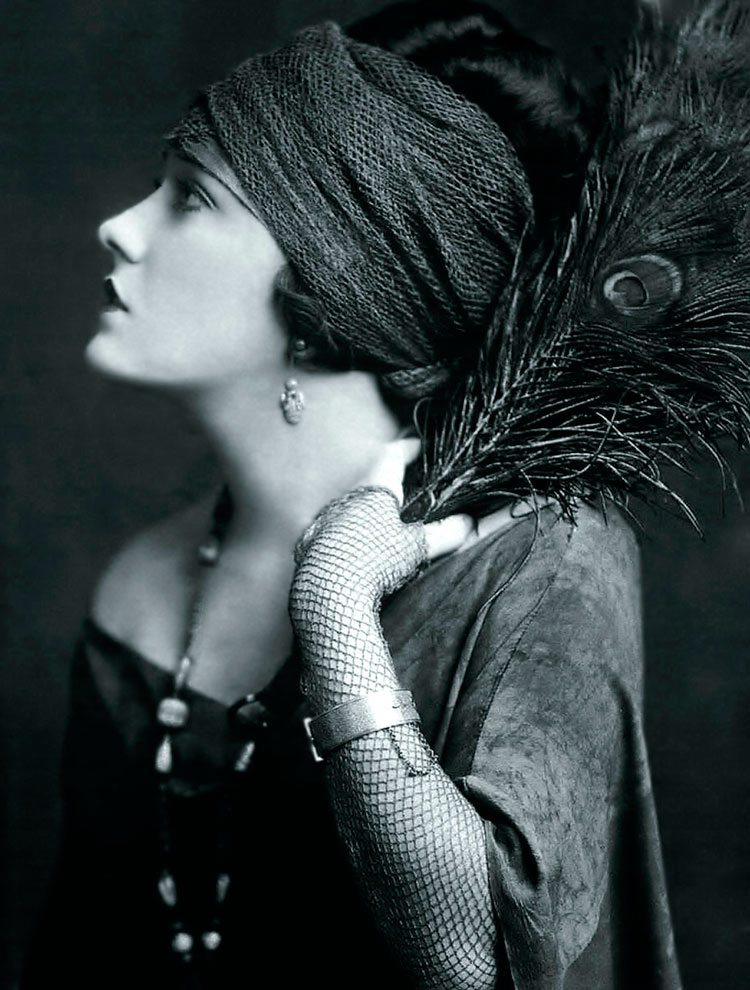 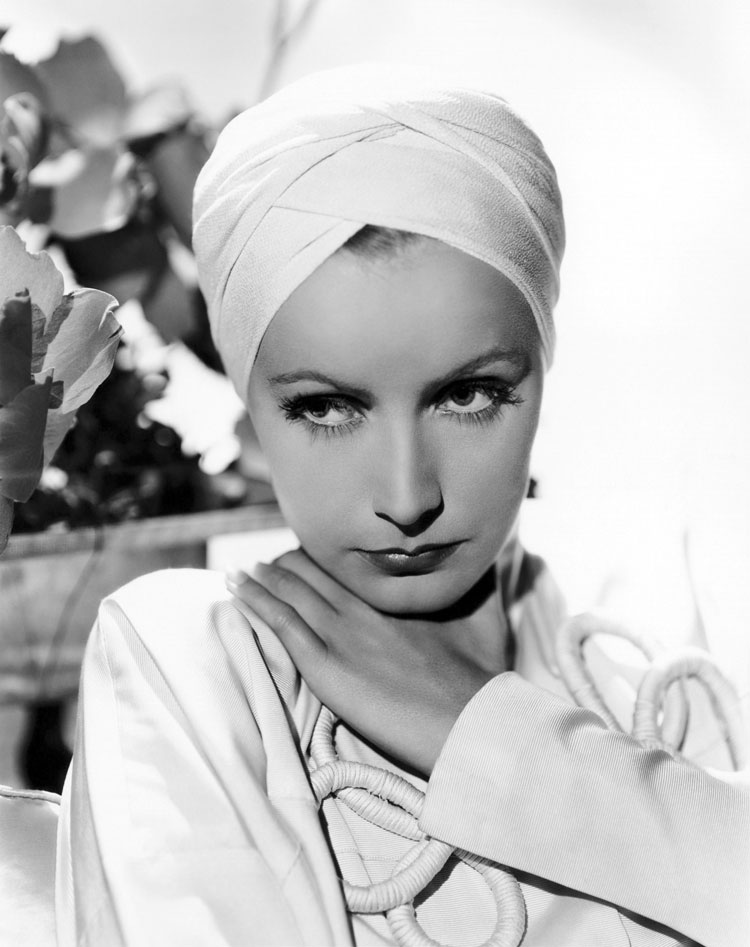 Jumping forward to the 1950s and the draped turban had yet another revival. In 1955 Christian Dior designed a turban that was worn by Elizabeth Parke Firestone. Known for her bold fashion choices, the socialite was reported to have worn the grey wool turban many times between the years of 1955 and 1960. German actress Marlene Dietrich was also known to have worn turban designs created by Christian Dior. 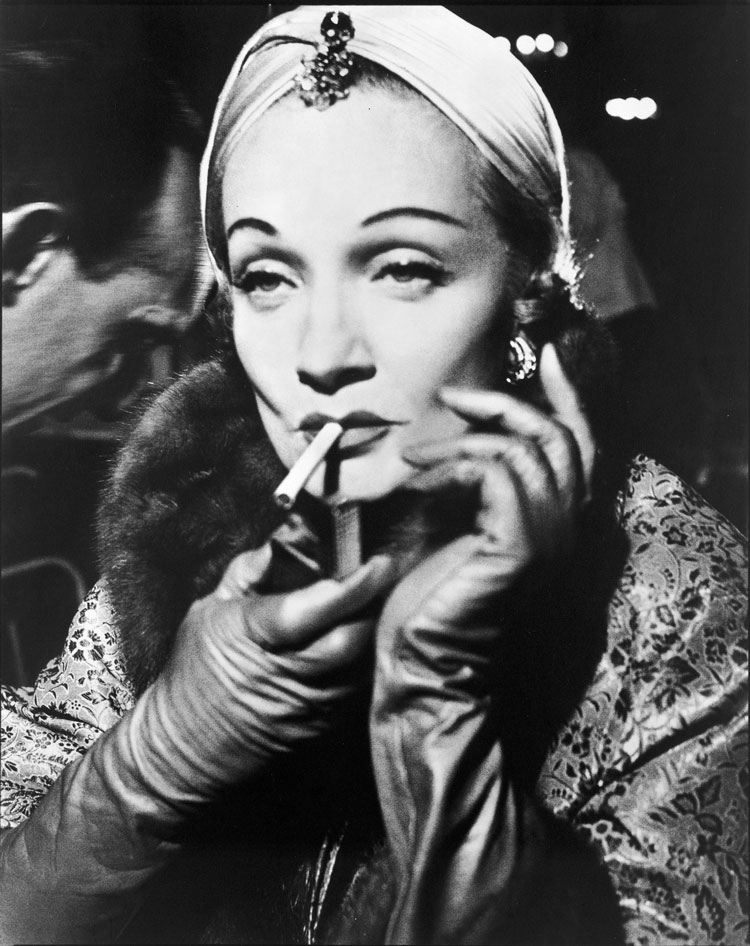 As hairstyles changed, turban styles were adapted to cover the bouffant hair trend of the fifties and sixties. Milliner Claude Saint-Cyr, who designed hats for HRH The Queen created a softer felt turban in 1956 that covered the ears and rose to a draped peak at the back of the head. In fact the turban became one of Her Majesty’s signature hats throughout the 60s and 70s. In 1979 she wore a blue layered turban on a visit to the Gulf region, while on a trip to Mexico she wore a bright yellow polka dot variation.

In the 70’s turbans again had a boost in popularity. With fashion house Biba leading the way in quirky style, they designed feathered turbans  that were worn by the likes of Twiggy and Jean Shrimpton. The turbans were paired with kaftans or loose silk blouses giving the same oriental look that became popular in the twenties. Actresses including Elizabeth Taylor and Joan Collins began wearing turbans as day and evening wear. 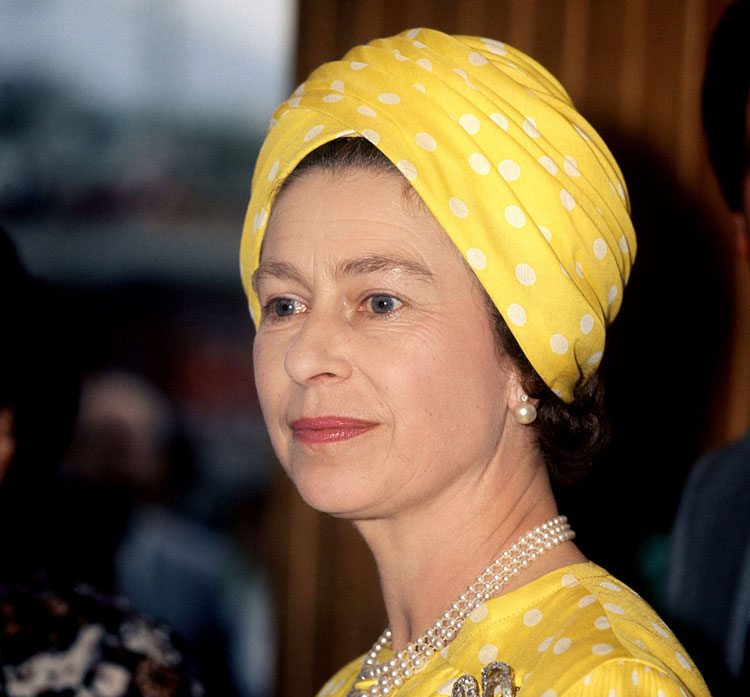 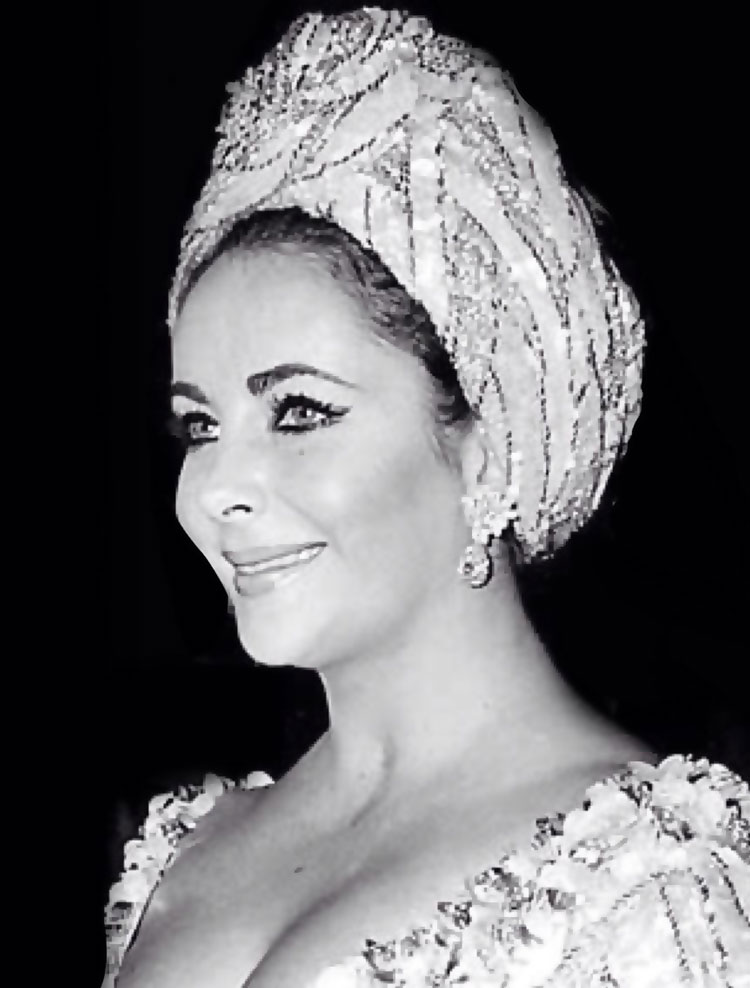 After the seventies revival turbans took a back seat throughout the edgy styles of the eighties and nineties. In 2007 Prada showed turbans as part of their spring/summer collection and the release of Sex and the City 2 in 2010 saw Sarah Jessica Parker making the accessories noticeably popular again. Sarah Jessica wore a gold silk turban by Ralph Lauren from his Spring 2009 collection. The actress was then seen wearing one off-screen when she attended the premiere of her movie. 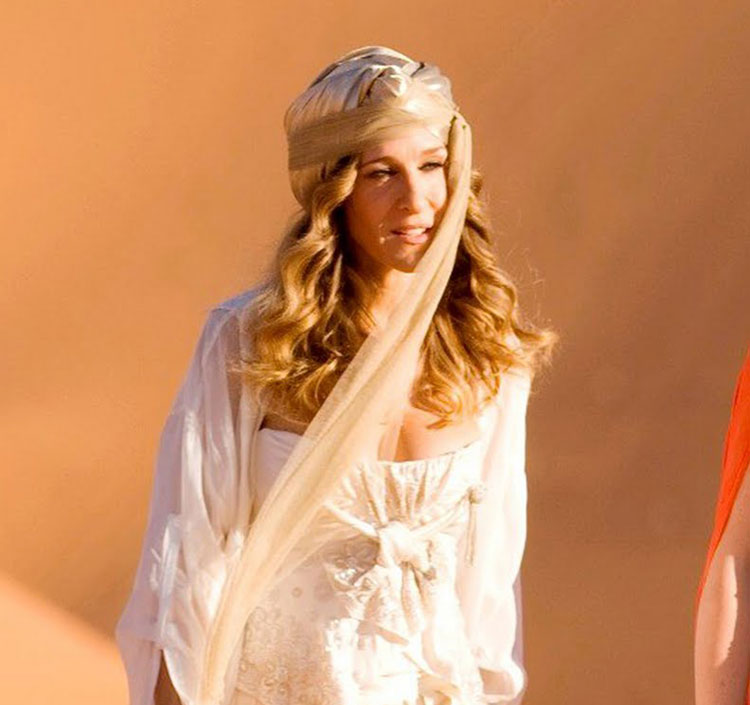 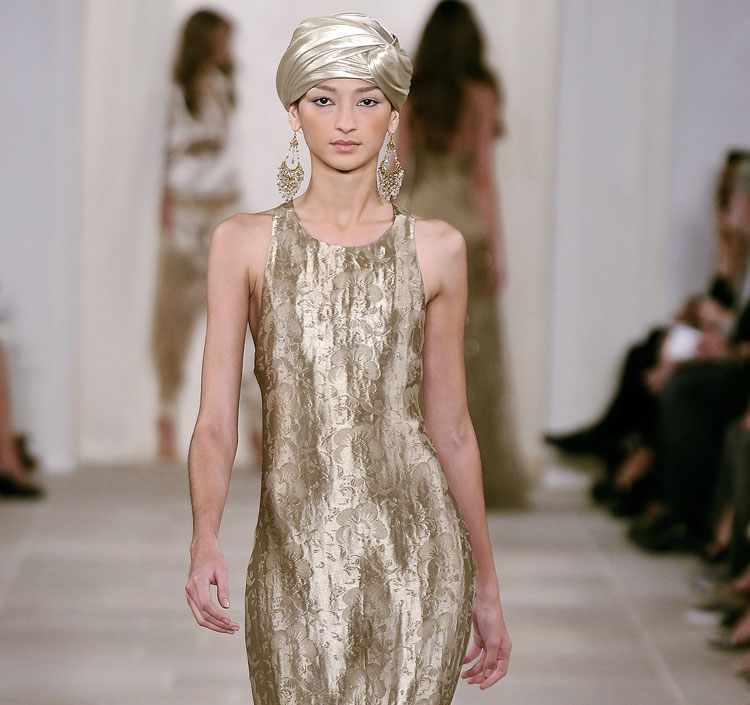 Fast forward to 2018 and the turban is perceived as holiday wear. With a relaxed feel to them turbans can be wore with kaftans and swimwear on vacation. As demonstrated by Emilio Pucci for its spring/summer 18 show. Models wore printed turbans and towels presented as turbans with matching vacation looks. For his spring 2018 collection Marc Jacobs brought back the turban as evening wear. At his show in New York he presented silk  headscarves adored with brooches and jewels. The turbans which came in variations including metallic, coordinated colour and glitter accented were worn with evening gowns and dresses and gave an edge to the looks. The turbans were actually designed by milliner Stephen Jones, who teamed up with Jacobs for the show. 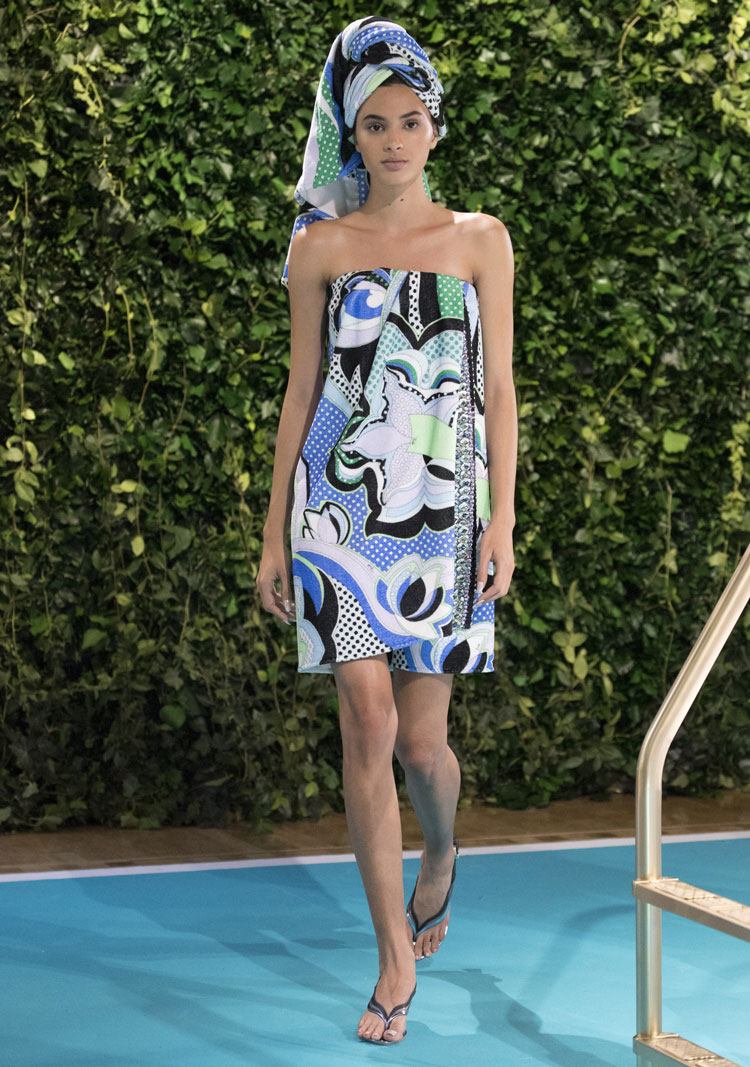 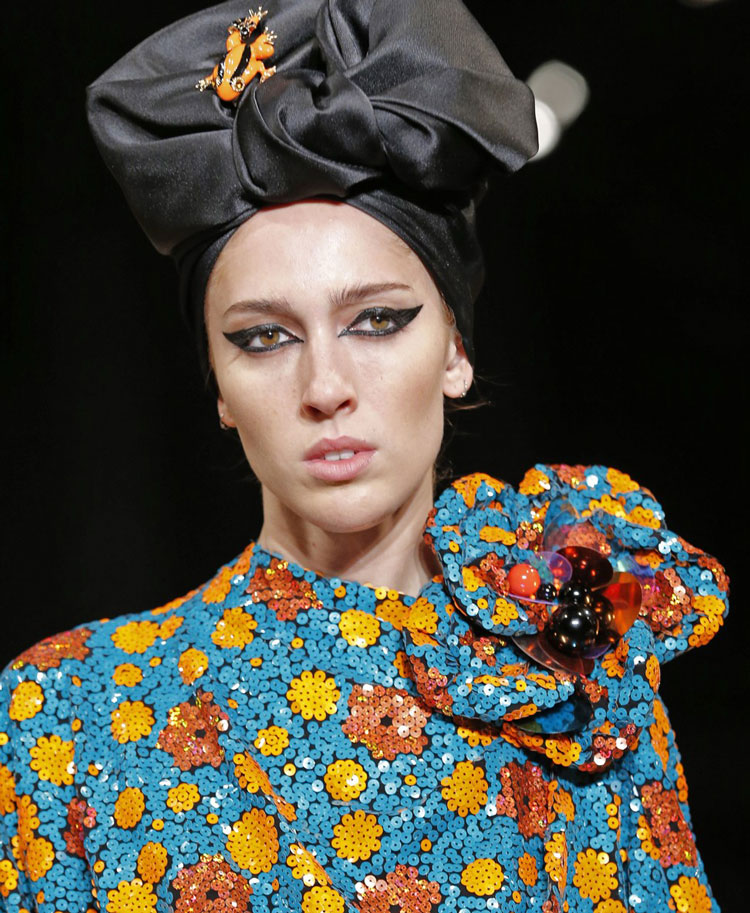 And more recently Gucci presented men and women in turbans at their fall 2018 show in Milan. The move by Alessandro Michele has received conflicting reviews as the turbans were very similar to the religious styles rather than the draped variations. 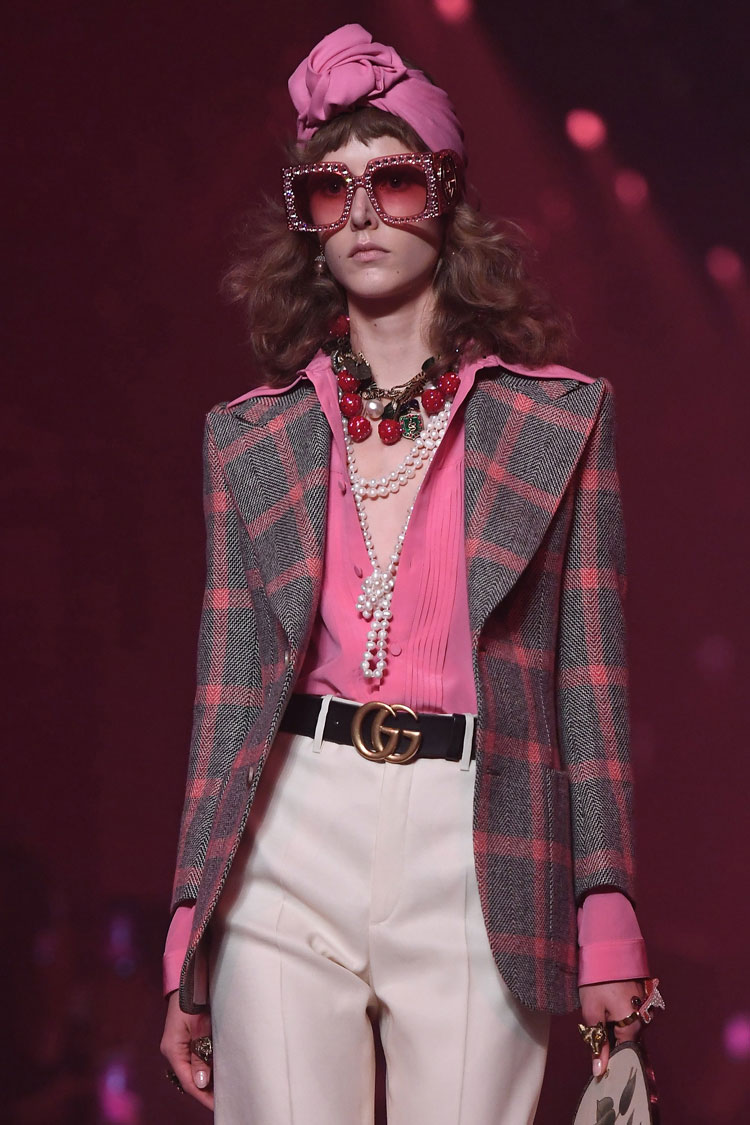