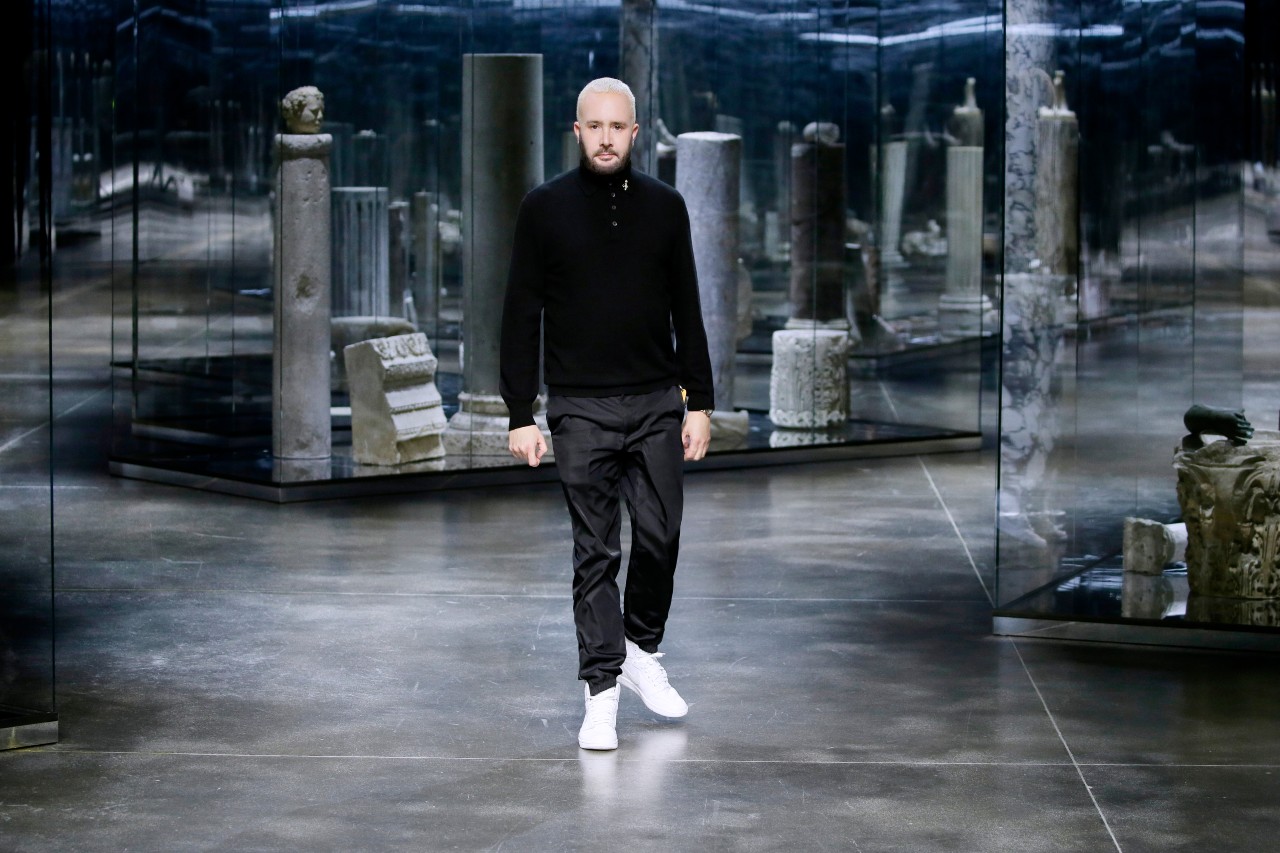 The wardrobes of the five Fendi sisters were an inspiration for the collection which paid tribute to the traditional codes of the House, a homage to the key codes of the brand and the women who have embodied its legacy. 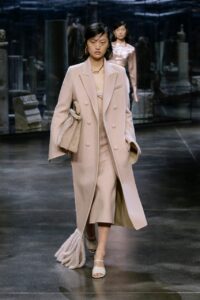 Taking inspiration from the clothes worn by members of the Fendi family, Jones’ first collection featured elements of the past, presented in a truly modern way.

He drew on specifics from the wardrobes of the Fendi sisters including the bell sleeves of a washed mink and bonded suede coat, the pinstripes of their office attire now rendered in silken shirting or perfectly proportioned wool tailoring, and a utilitarian shirt jacket, inspired by Silvia Venturini Fendi’s daily uniform, is elevated into a new, luxurious, shearling iteration with a bonded mink interior. “The Fendi family are women of intellect who work hard – and that’s what I wanted to celebrate,” notes Jones. “A powerful dynasty.” 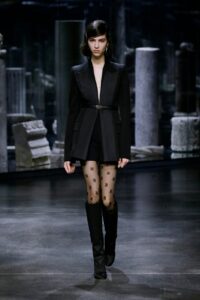 Double cashmere and camel outerwear which extends into mink tricot or wool-fringed scarves appears at once profoundly practical and deeply desirable, its form elsewhere translated into draped shirts and dresses. “I’m taking the amazing, strong women who I both know and work with, and listening to their needs,” Jones continues. “There’s a usefulness to the collection, explored in a chic, timeless way.”

An honorary member of the Fendi family was also acknowledged through this special collection. Jones revived Karl Lagerfeld’s Karligraphy monogram. 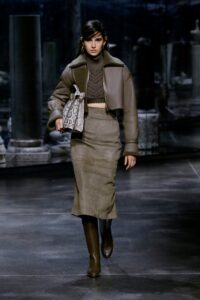 The remarkable craftsmanship of the Fendi ateliers is clear throughout – in a mink herringbone jacket made featherlight through its suspended construction, leather suiting inset with ajour embroidery, or Karligraphy monograms laser cut into suede.

The embossed Selleria stitching applied to gabardine trenches, double cashmere coats or leather accessories is a tribute to that meticulous exceptionalism – a quality most visible to the women who will wear the clothes. “Fun isn’t always just about bright colours,” says Jones. “It can be about really luxurious self-indulgence, which pleases the person wearing it more than anyone else.” 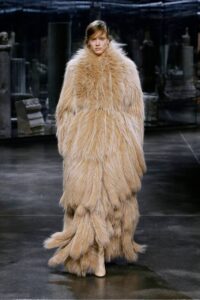 This is a collection designed with those women in mind: clothing that translates everyday femininity into hyper-luxurious terrain.

Bags for this collection were directed by Silvia Venturini Fendi who debuted the FENDI First which pays homage to the off-kilter irreverence of the brand, with the Fendi monogram tilted into the frame of a clutch.

New silhouettes were also presented through the Fendi Way tote and Fendu Touch shoulder bag. While classics including the Peekaboo and Sunshine Shopper are seen from a new perspective, distorted into new proportions and decorated with Selleria details. 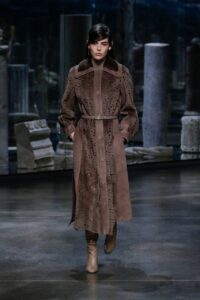 This season, the FENDI hand in hand project – which enlists craftspeople from each of Italy’s 20 regions to reimagine the iconic Baguette – translates Campania’s artisanal excellence into a limited-edition series of objects d’art. Here the same, intricate wood inlays found in 6th century Benedictine monasteries become a veneered, structured Baguette with a baroque floral motif.