Who Is Banksy? The Truth Behind The Artist

As the largest exhibition to feature replicas of his artworks opens in Dubai, we discover more about the most secretive man in the art world 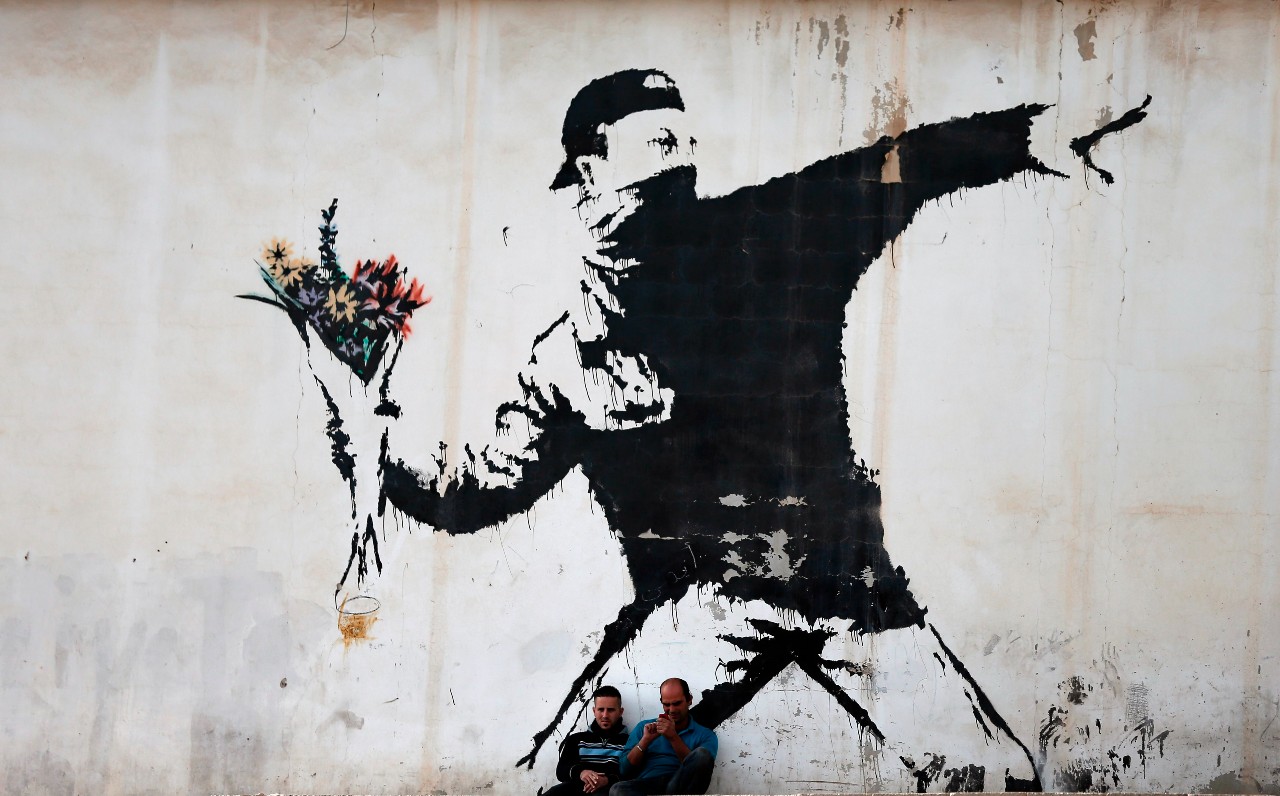 The world’s largest Banksy exhibition is currently on show at THE THEATRE at Mall of the Emirates in Dubai. “The World of Banksy” is showing 120 recreated pieces of the iconic street artist’s work in an immersive experience that allows guests to get up close and personal to some of the artists most recognisable artworks. But who is the real Banksy? The street artist has one of the most recognisable names in the art world, but despite there being a great deal of speculation over the years, until today, the artist’s true identity has never been revealed. The mystery around his identity has intensified his popularity over the years and has catapulted him from UK-based graffiti street artist to global icon. But despite his global success, the world is still no closer to uncovering the mystery behind his identity. We delve into the details of what is known about the world’s most mysterious artist. 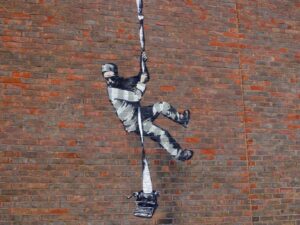 Banksy is originally from Bristol, England and he first started creating graffiti works in the mid-nineties. He was part of Bristol’s DryBreadZ Crew along with two other artists known as Kato and Tes. His works first appeared in the streets of his hometown and he soon met photographer Steve Lazarides who began selling his works, before later becoming his agent. After spray painting artworks around the city, Banksy soon started to work with stencilling after realising how much quicker he could complete street works without being noticed. Street art is still illegal in the United Kingdom and many countries around the world, so despite the beauty of his art, he was facing many challenges. The rumour is that the artist decided to change his method to stencilling while hiding from the police under a rubbish lorry as he realised it would allow him much more flexibility with his public artworks. Because of the secretive nature of Banksy’s work and identity, it is uncertain what techniques exactly he uses to generate the images in the stencils, though it is assumed he uses computers for some images due to the photographic quality of much of his work.

Banksy’s first exhibition came in 2000 and was held at a restaurant in Bristol, but the artist’s identity remained a mystery. There are many rumours of his true identity but none have ever been confirmed. In fact, many of us could have passed the artist on the street and would never know! After this first exhibition, his popularity began to expand outside of Bristol and he had many collaborations with other artists and musicians. 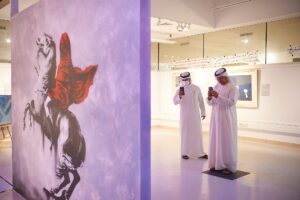 The World Of Banksy

Banksy’s works combine dark humour with political statements and social commentary, often highlighting the struggles in the world today or making a statement about the state of the planet. The messages are usually focused around anti-war, anti-capitalist, or anti-establishment. His first known large wall mural was The Mild Mild West, painted in 1997 to cover advertising of a former solicitors’ office on Stokes Croft in Bristol. It depicts a teddy bear lobbing a Molotov cocktail at three riot police. In August 2004, Banksy produced a quantity of spoof British £10 notes, replacing the picture of the Queen’s head with Diana, Princess of Wales’s head and changing the text “Bank of England” to “Banksy of England”. The individual notes have since been selling on eBay.

As his success began to grow the artist developed a global celebrity following, with many world-famous actors, athletes, musicians, and fellow artists, including Christina Aguilera, Justin Bieber, Serena Williams and Angelina Jolie, having acquired his work. His works started to sell for tens of thousands of British pounds. On 19 October 2006, a set of Kate Moss paintings sold in Sotheby’s London for £50,400, setting an auction record for Banksy’s work. The six silk-screen prints, featuring the model painted in the style of Andy Warhol’s Marilyn Monroe pictures, sold for five times their estimated price. Their stencil of a green Mona Lisa with real paint dripping from her eyes sold for £57,600 at the same auction. 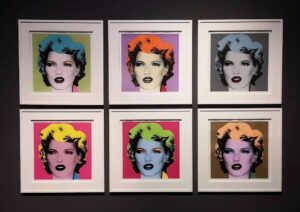 By 2007, his works were selling for hundreds of thousands of pounds. On 21 February of that year, Sotheby’s auction house in London auctioned three works, reaching the highest ever price for a Banksy work at auction: over £102,000 for Bombing Middle England. Two of his other graffiti works, Girl with Balloon and Bomb Hugger, sold for £37,200 and £31,200 respectively, which were well above their estimated prices. The following day’s auction saw a further three Banksy works reach soaring prices: Ballerina with Action Man Parts reached £96,000; Glory sold for £72,000; Untitled (2004) sold for £33,600; all significantly above price estimates. On 27 April 2007, a new record high for the sale of Banksy’s work was set with the auction of the work Space Girl and Bird fetching £288,000 around 20 times the estimate at Bonhams of London. 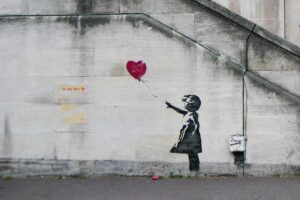 Then in 2017, marking the 100th anniversary of the British control of Palestine, Banksy financed the creation of the Walled Off Hotel in Bethlehem. This hotel is open to the public and contains rooms designed by Banksy, Sami Musa, and Dominique Petrin, and each of the bedrooms faces the wall. It also houses a contemporary art gallery. 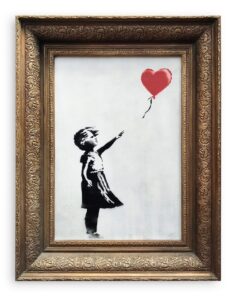 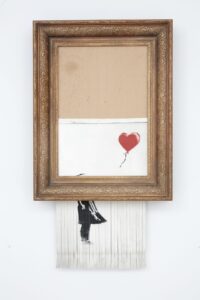 In October 2018, one of Banksy’s works and perhaps the most iconic of all, Balloon Girl, was sold in an auction at Sotheby’s in London for a record-breaking £1.04m. However, shortly after it was sold, an alarm sounded inside of the picture frame and the canvas passed through a shredder hidden within the frame, partially shredding the picture. Banksy then posted an image of the shredding on Instagram captioned “Going, going, gone…”. After the sale, the auction house acknowledged that the self-destruction of the work was a prank by the artist. A man seen filming the shredding of the picture during its auction was actually suggested to be Banksy although the reports have never been confirmed. Banksy has since released a video on how the shredder was installed into the frame and the shredding of the picture, explaining that he had fitted the painting with the shredder a few years previously, in case it ever went up for auction. To explain his rationale for destroying his own artwork, Banksy quoted Picasso: “The urge to destroy is also a creative urge” The woman who won the bidding at the auction decided to go through with the purchase. The partially shredded work has been given a new title, Love is in the Bin, and it was authenticated by Banksy’s authentication body Pest Control. Sotheby released a statement that said “Banksy didn’t destroy an artwork in the auction, he created one,” and called it “the first artwork in history to have been created live during an auction.” 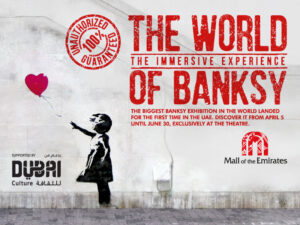 Today, Banksy displays his art on publicly visible surfaces such as walls and self-built physical prop pieces. He no longer sells photographs or reproductions of his street graffiti, but his public “installations” are regularly resold, often even by removing the wall they were painted on. A small number of his works are officially, non-publicly, sold through an agency created by Banksy named Pest Control.

“The World of Banksy” is running from April 5 until June 30, exclusively at THE THEATRE, Mall of the Emirates. 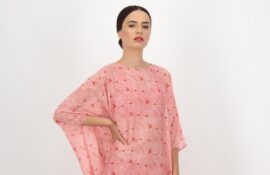