In the Fast Lane: Amna Al Qubaisi On Being the UAE’s First Female F3 Driver 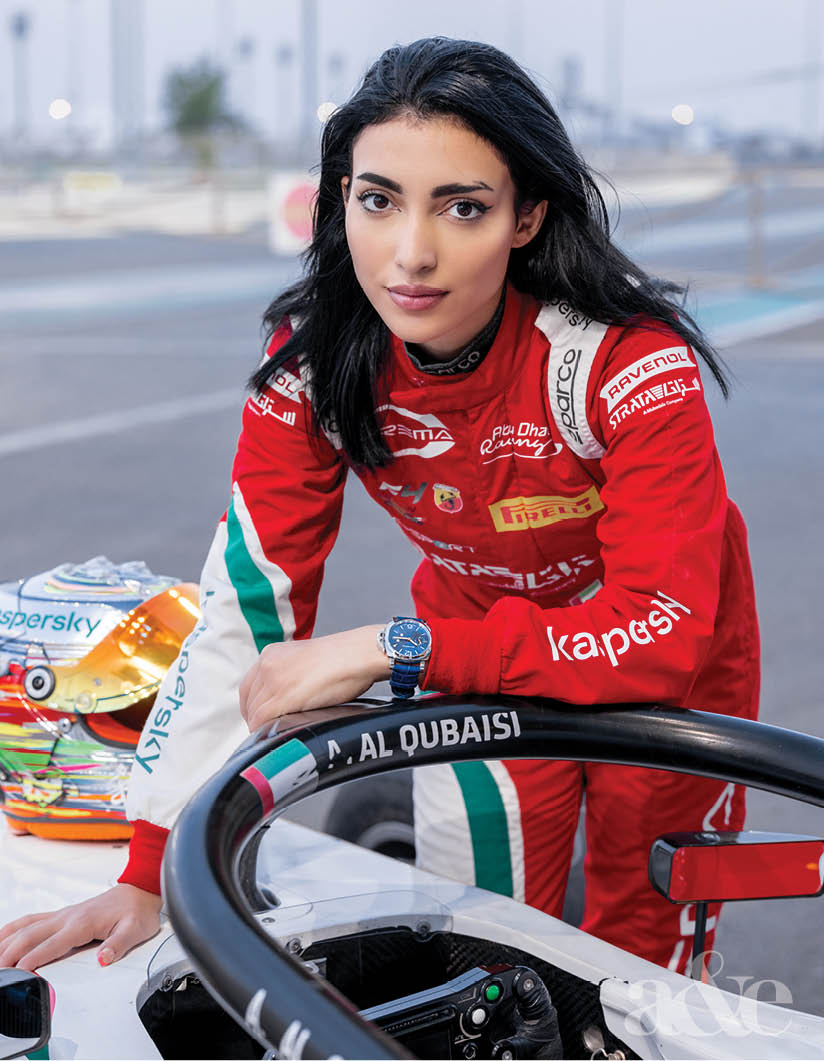 Growing up, Amna Al Qubaisi has always been interested in racing thanks to her father who was a driver himself. Khaled Abdull Al Qubaisi made history when he became the first Emirati to compete at the legendary 24 Hours of Le Mans race in France claiming two class podiums. Seeing the success of her father Amna was inspired to race too, but being a girl, of course, she was always going to have to work harder. She began karting at a young age and was determined to reach her dreams. In 2014 She was the first female Arab to participate in the Rotax Max Challenge (RMC) World Finals.

Two years later she began competing internationally claiming top 10 finishes. By 2018, Amna was competing in Formula 4 and the same year she was the first Middle Eastern woman to take part in a motorsport test program for Formula E after the Ad Diriyah ePrix in Saudi Arabia. This was just a few months after a ban, prohibiting all women from driving, was lifted within the country. Her greatest challenge came this year when she entered Formula 3 this year where she finished 24th in the Formula 3 Asian Championship. But Amna won’t stop there.

With aspirations to race in Formula 1, she is currently in training for her next Formula 3 season next year. We met with Amna trackside at YAS Marina Circuit in Abu Dhabi to find out more about her dreams and turning her passion for racing into a career. 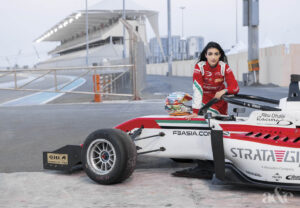 What led you to a career in motor racing?

I started with gymnastics when I was young, but by the time I was nine years old my father, who was a driver, was competing at Porsche GT3 races nationally and internationally, so I became very interested in racing. He would invite his teammates and other drivers over to our house and we would talk about racing and some of the extraordinary tracks they have been to and that’s when the spark came. I soon told my dad that I wanted to get involved in motorsport and I stopped gymnastics at the age of 13 to pursue my dreams of a career in driving.

What was your father’s reaction when you told him this was the path you wanted to follow?

He was very supportive, but he was quite surprised. I think he was expecting my brothers to be the ones to get involved! But he coached and supported me along the way, especially with karting which I started six years ago. I was part of an academy and I competed nationally for my first two years before moving up to compete internationally in 2016. Then I won the UAE championship and the GCC Driver’s Programme. It was after this that I received sponsorship to compete in the Formula 4 Italian Championship which I did in 2018 and 2019. In my last F4 race, I won my first ever FIA single-seater race and now I’m in Formula 3. 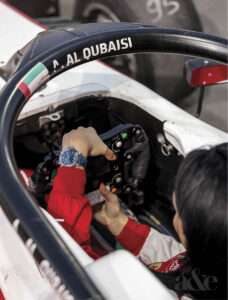 What is your ultimate goal and where would you like to get to in your career?

My ultimate goal like any other driver is to compete in Formula 1. But momentarily it is to climb up the ladder and get good results. Podium results would also be amazing!

As a woman in a male-dominated industry what were some of the challenges you had on your way and how did you overcome them and make sure your voice was heard?

Yes, it’s quite difficult to be a girl in the racing industry because I compete with men, and they are very aggressive on the track. They do not like a woman being ahead of them! I’ve been pushed out many times because of my gender, so it’s quite difficult, but when I get pushed, I push back and get the respect I deserve. 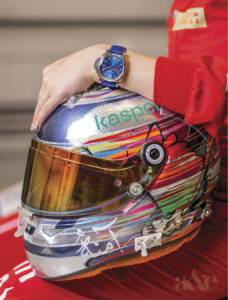 What would you say to other women who are interested in getting into the world of motorsport?

I would tell them to go for it, but it is very difficult at the start. It’s not an easy sport, it requires a lot of time, a lot of effort and commitment. You need to be passionate about it and with time you will start ranking up.

Who has been your biggest inspiration or support throughout your career so far?

My father. He was the main reason I was ever interested in motorsports so he would have to be my biggest inspiration. 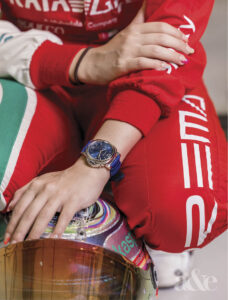 You have been the first in the UAE to achieve this success as a woman in the sport but what would you like to see moving forward in the industry in relation to this?

What’s the biggest challenge you face?

The biggest challenge is finding sponsorship opportunities. Motorsport is an expensive sport and finding a sponsor is very difficult, so to maintain that training and to have a good team and a good car requires a lot of investment and you need both if you want to do well. The way to find sponsorship is through exposure and by winning races. 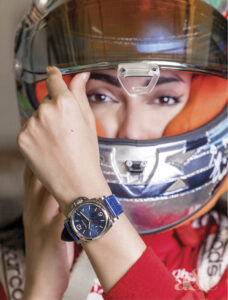 Where is your favourite place to race?

My favourite place to race is the Mugello Circuit – it’s in Italy, in Tuscany.

This year the UAE is celebrating its 50th anniversary, what does this occasion mean to you?

To me, this anniversary means the establishment of a country that for 50 years has been supportive. They built a country from nothing and turned it into something extraordinary in such a short time and the country has grown and evolved so much. 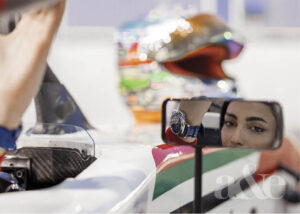 Where would you like to see the UAE in another 50 years?

In another 50 years, I hope to see the UAE expand its businesses but more importantly, I want people from outside the UAE to perceive women here in a different way. Until now, when I’m in Europe, people assume that the women here are housewives who cannot be CEOs or sportswomen etc. and we know this is not the case. So that’s what I hope will change throughout the next fifty years.

What is your favourite memory of growing up in the UAE?

When I was around 8 or 9 years old and we used to play at the parks. We would go on field trips to plays and that is the type of memory I really enjoy and I miss. Nowadays, field trips are to theme parks! So I miss those days. 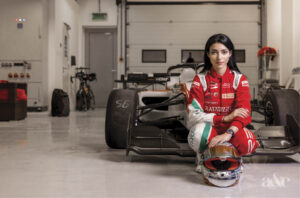 What goes through your mind when you’re racing on the track?

Racing it’s almost like therapy for me. When I’m in the car I don’t focus on anything other than racing – thinking about the gears, the corners, learning the line, the breaking points – I just focus on these things and where I need to improve. This keeps my mind off everything else.

What do you do when you have a day off?

When I have a day off, depending on how tired I am, I will go out with my friends and go to showrooms and look at cars. 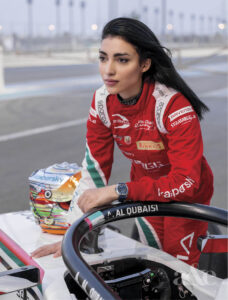 What does time mean to you?

Time for me means living in the moment. I do not think about the past or the future, I just enjoy the moment with my loved ones and with friends and I just like to have a good time.

That is a very good question! I am really organised with my time, even though it’s very hectic. I am good at balancing things. I balance University, work, racing, I always find a way to get everything done on time. University is a priority – especially for my father!

What’s the motto that you live by?

It’s a racing motto: “you win some, you lose some, you wreck some.” So whatever you go through, you always have to accept it and move on, because you can’t be winning all the time. It’s about balance.

What’s in the pipeline for you?

In the pipeline for this year is for me to get enough training for my next season in 2022 – a lot of gym training, using a simulator to get me used to the car, and in 2022 that’s when the game begins with my Formula 3 season.