A. Lange & Söhne Moving Tribute To The Late Walter Lange 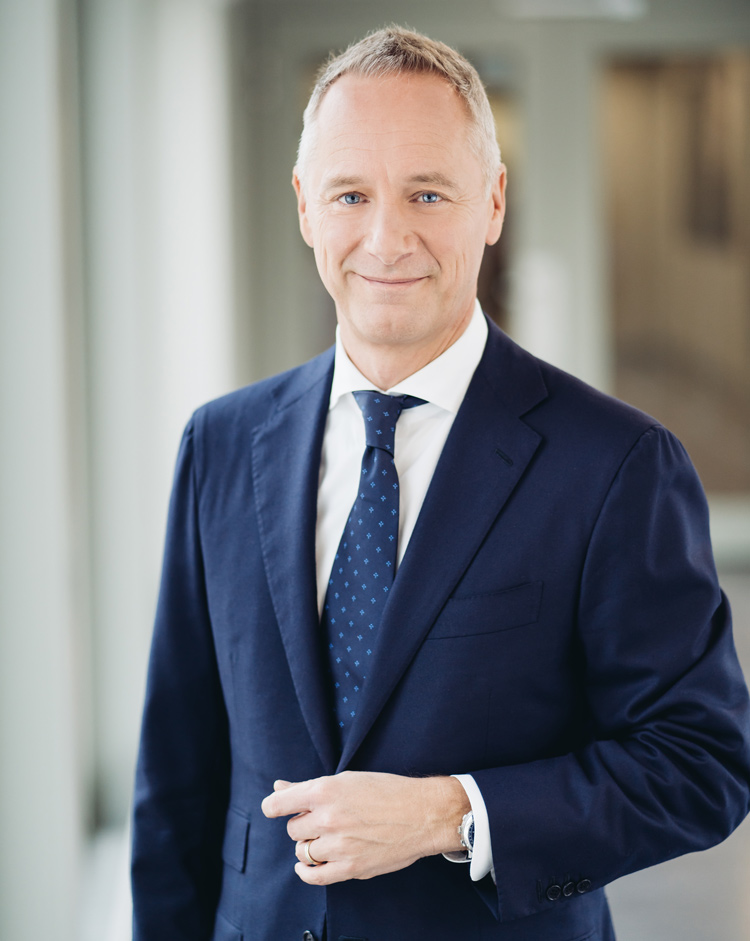 The last two years have been a turbulent time for A. Lange & Söhne. The death of their founder Walter Lange in 2017 was a shock to the brand – but they chose not to dwell on the tragedy and instead celebrate his legacy. This year they presented the Homage to Walter Lange collection at SIHH – a carefully curated limited number of watches that encompassed everything their founder loved. Put together in just nine months, the aim of the pieces was to honour the founder with watches he would be proud of.

At the helm of the operation was CEO Wilhelm Schmid, who last year found himself wondering how was the best way to pay tribute to Walter’s legacy and found the perfect solution. Earlier this year, the collection was presented at SIHH – including a one of a kind steel watch that was auctioned for charity. Here Schmid discusses the latest novelties from the brand including the Homage to Walter Lange collection which holds a very special place in his heart.

To what extent today is story telling still relevant, and how important is it in fine watchmaking?

People are clever enough to distinguish between tales and true stories. I believe that is the problem and the challenge. Yes stories are important because stories are what sticks in your mind, technical fact doesn’t stick in your mind unless a story goes with it. That’s how our brain works. If you connect the two things, you have a home run! That’s what people will remember and that is what people enjoy. But these stories have to be authentic and true. If they are just a marketing story, I think in today’s world people will realise that very quickly and that can even backfire on you.

Do you think nowadays over communicating kills desire?

They say that our eye is gathering a lot more information than our brain is actually capable of processing. So there’s a filter on what we see and what we don’t. Gladly because otherwise you couldn’t watch television, for example, because the information you would see is far more than you can compute. With over communication I think it is exactly the same. There is a filter, which will distinguish the relevant from the irrelevant, and I believe that filter is of interest to me. Is it true? Is it something I’d like to look in to? And I think that will be in the future the thing – do you have enough people so that what you offer is of interest for them? And is what you put around it is complimenting your product or is it taking attention away? The best story doesn’t help if the product is nothing. There’s always a trap – the moment of purchase in comparison to the period of time of owning and enjoying is very short. So if you over emphasise on that moment of purchase it’s very easy to disappoint on the pleasure of owning it. I think that’s where we have to find a good balance.

We have two watches which are important for very different reasons. We have these technical watches – truly unique masterpieces that have never been done before. In today’s world after 250 years of fine-watchmaking, defining a field that nobody has touched so far is very interesting. It’s the triple-split. Which means it’s a chronograph with a split second, split minutes and now split hours. You can only get this with the triple-split. It’s a large watch. Don’t under estimate creating a big watch – I don’t have massive wrists but I’ve been wearing this for five days now and it’s actually very comfortable. So that’s the technical highlight of the year for watch lovers – you have to be a bit of a nerd to appreciate this! 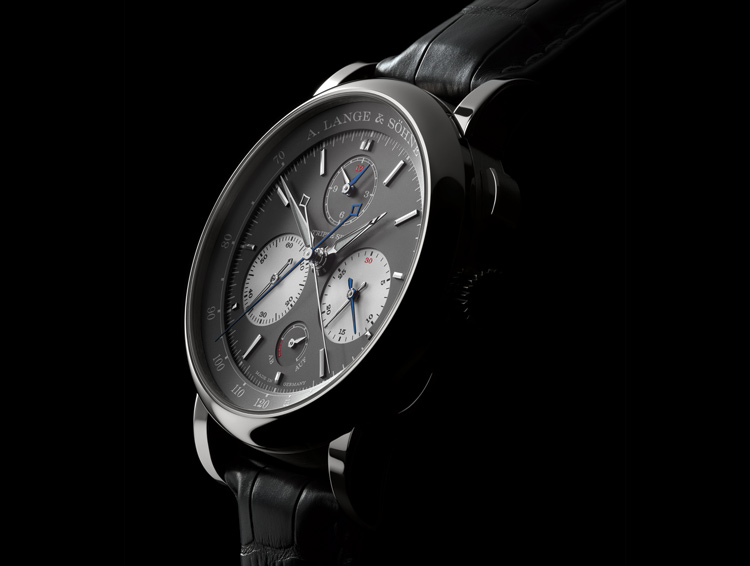 And then we have the emotional highlight. Over a year ago Mr Lange past away. After we came back from SIHH last year we first of all had to do all the funeral activities and there was quite a lot of work to do because you cannot plan for that. So after that we then put our heads together to ask “what do we do for him?” It was clear it had to be a watch – he was always, always pushing us to do the jumping second design – and I always refused because it is quite a complex movement and it is not financially benefiting – you cannot ask for hundreds of thousands of euros for it but the movement is a very complicated thing to build – so I had always said no. But now is the moment to say yes! So we present this watch. When he passed away, our little company was operating for 27 years and yellow gold was his favourite metal – so that’s why there are 27 yellow gold watches. We were founded in 1990 – that’s why there are 90 pink gold watches and that was 145 years after Ferdinand Adolph Lange first founded the company for the first time and that’s why there will be 145 white gold watches. Everything on the watch is connected to him – the calibre is his birthday, there are so many things in it which all refer back to him. 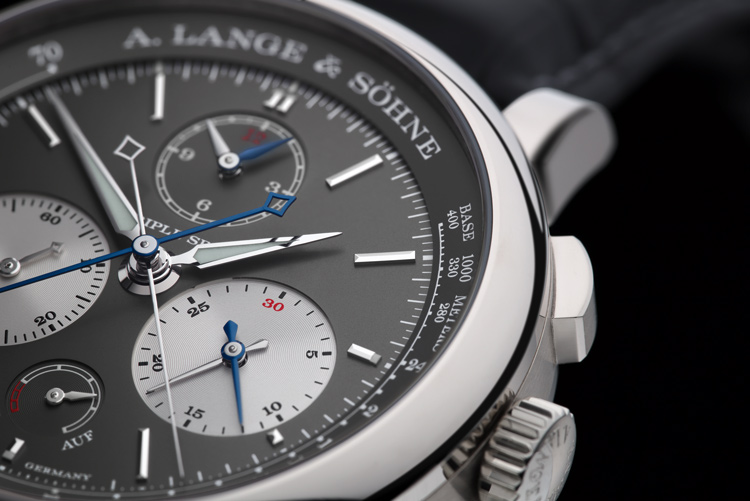 There is one other topic which he was always fond of and that is taking care of children. He was very keen to understand what the next generation is, and he was quite a generous man to support children in need. And that’s why we decided we would have one completely unique watch which is combining what every collector on the planet is asking for. Black enamel dials and stainless steel. So that’s why we have created in a way the weirdest combination of the most expensive dial that we have and the least expensive material but the rarest. All of the proceedings of this watch will go to helping children.

So we have watches that we would never have produced for him [the founder], and one unique watch which we don’t sell. We did all of this in nine months. We can’t do this permanently I assure you but this time we managed it. It’s tells you a lot about motivation that we did it.  If I has asked my team to develop a movement in nine months that is not what we can usually do but for this exceptional moment, everybody was prepared to go the extra mile and  go over and beyond what they usually do. It was a huge team effort to have everything done in time. I’m very proud of them. 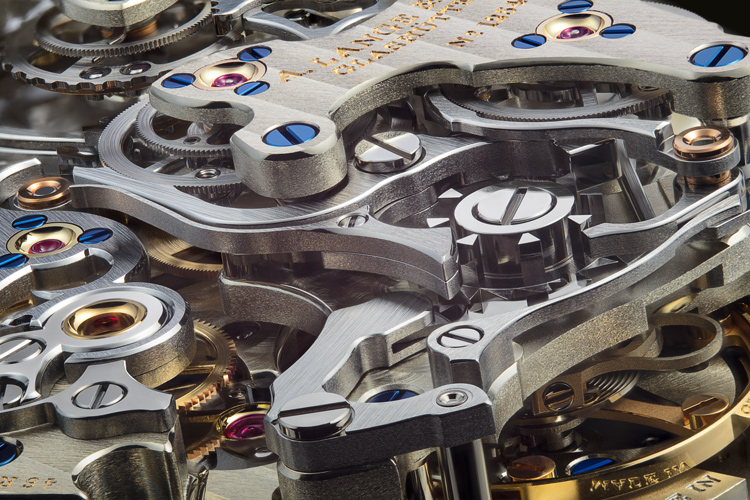 What do you have for women this year?

You may recall last year we launched the Little Lange Moon Phase, this year is the Little Lange One. The movement is exactly the same but all the rest is completely different to our normal watches. Usually we have cases with three pieces, but to make this watch as slim as possible we used a case that only has two pieces. With that you need less screws in it so it is flatter. It is more difficult to work with. The dial is an 18-carat gold dial. The edge is sharp and smooth and brilliantly formed – something that you have to use gold for. If you look to the brilliance of our dials – it is due to the fact that we use the best material for it. These watches have interchangeable straps and are made for ladies and for ladies to buy. They are not made for husbands to buy for their wives. That’s a huge difference from a product point of view for us. The price point is almost the same point as our normal Lange watch. 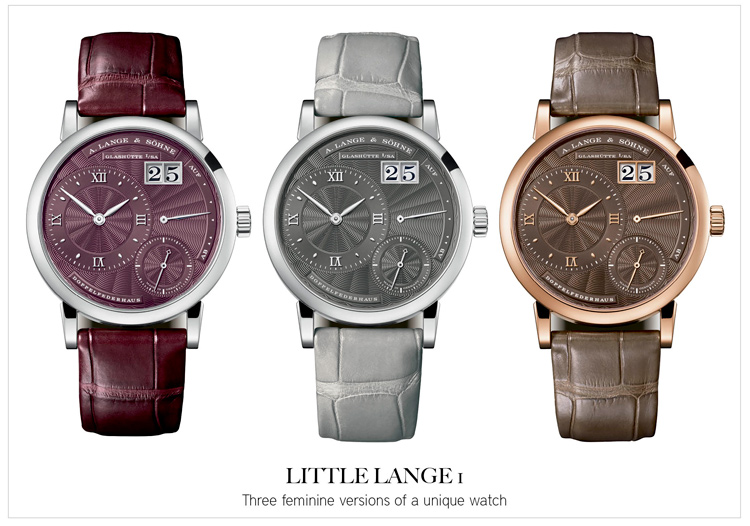 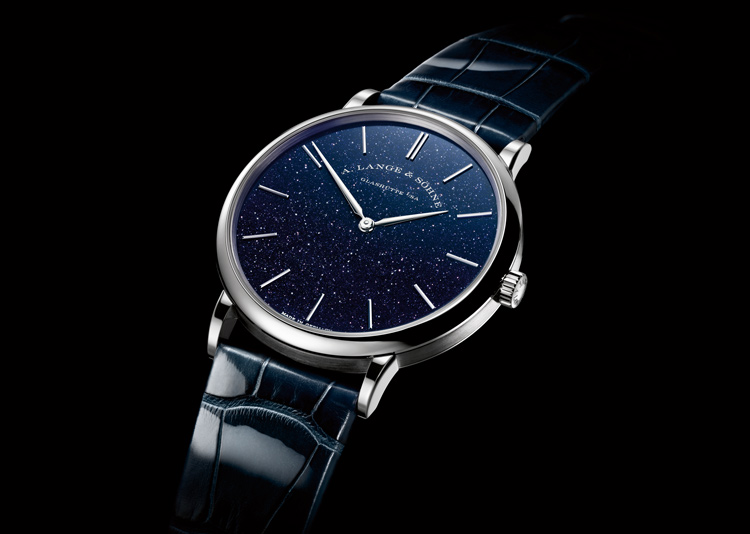 Talking about your alligator straps – how do you source your leather?

We have a complete controlled process and we source it through a supplier. 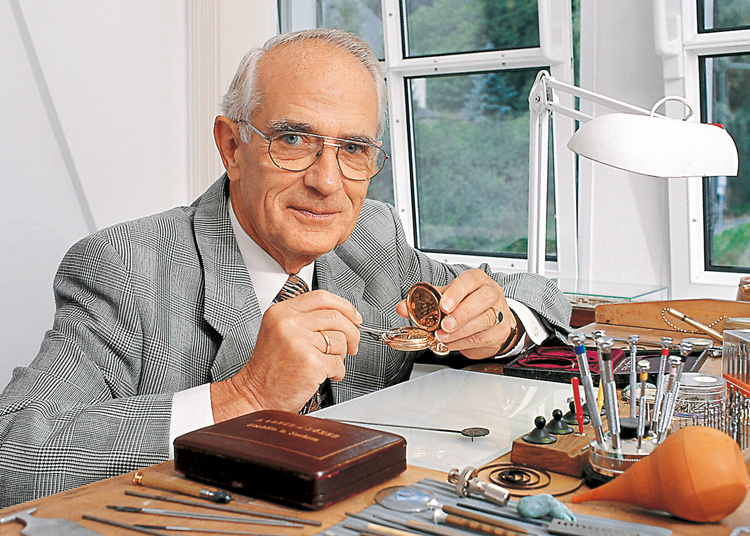 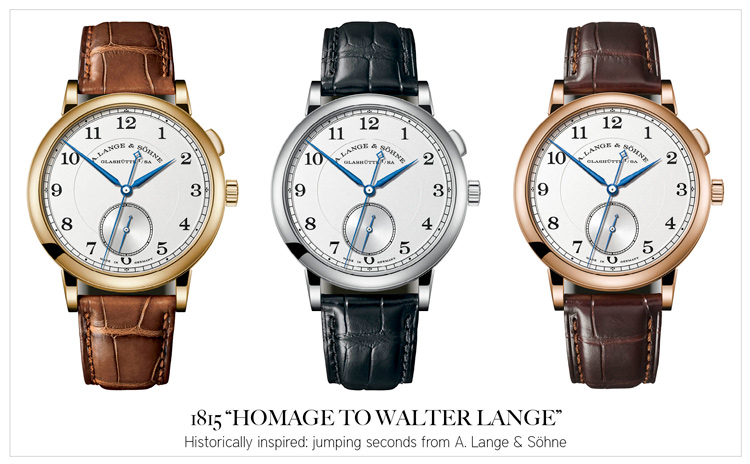 How complicated is the production of the dial?

It’s quartz elements (that’s where the sparkle comes from). First you melt it, you cast it and then you slice it and then you polish it. It’s very thin glass that you put almost like a layer on top of metal. It is not easy to work with. It is a bit of a challenge but it is actually very beautiful.

The last watch I want to talk about is this one (below) – I felt a touch of freshness and sportiness – tell me about it.

More and more we are getting a demand for people who want that one watch. There are of course the traditional approach of people who buy three watches a year and have a safe full of watches, but there are also people who say they want one nice watch. If you ask these people, they usually say it has to fit jeans and shorts but they also want to look not underdressed if they go to the office. So from this we thought we would work on that and see what we can come up with. So last year we decided to launch something that is a touch more contemporary. And then we also decided to give another price point that was slightly different. This watch actually has a different movement from what we did last year even though it looks similar. 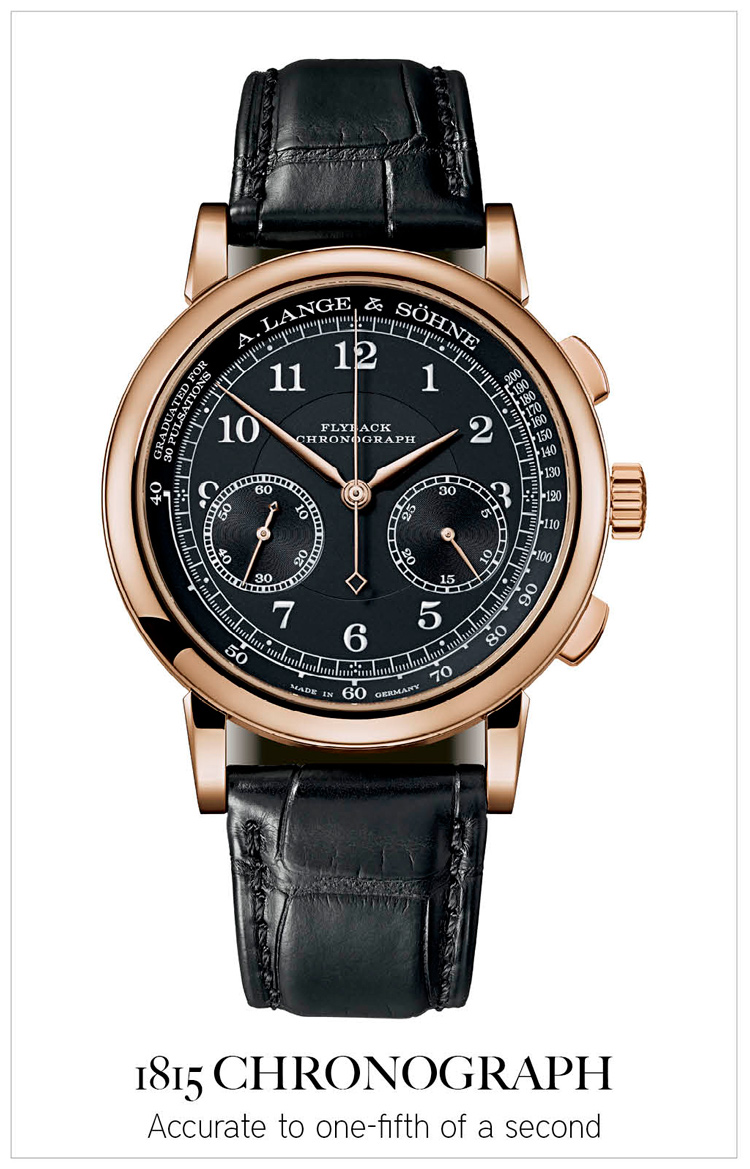 What’s your biggest challenge this year?

Moving marketing and public relations and design from Glashütte to Berlin in our new offices. Our headquarters is in the mountains but we need to be in a different environment. But to maintain my paradise of watchmaking in Glashütte, I need to create a paradise of marketing in Berlin. 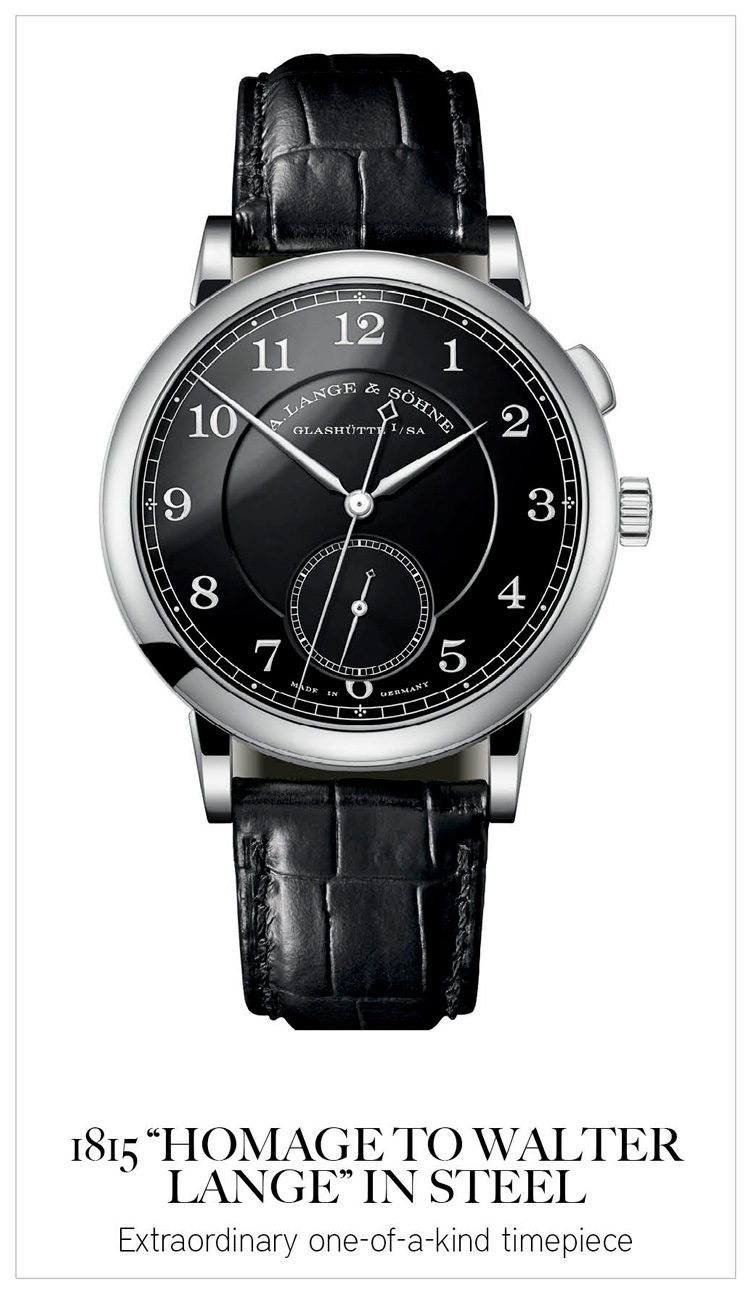 What did you promise yourself personally and professionally this year?

I promised myself to spend more time with the family and travel less weekends. Professionally I didn’t spend enough time in the manufactory last year. I was too busy I was travelling too much and for this year I promised that once a quarter I will be there.

Give me your vision for the brand in one sentence:

Paradise of watch making and paradise of marketing and public relations.