AUSTRALIAN SURFER SALLY FITZGIBBONS TELLS A&E HOW SHE IS AN EMPOWERED WOMAN IN A MAN’S WORLD BUT STILL MAINTAINS A SOFT AND CREATIVE SIDE. 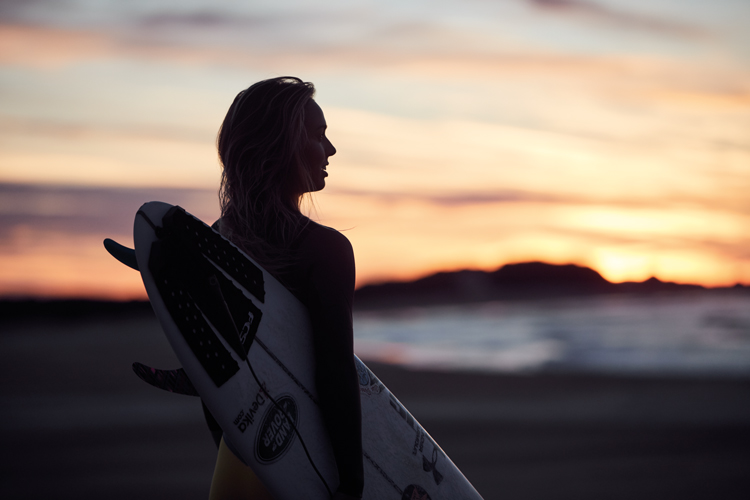 Sally Fitzgibbons is a woman on a mission. As one of the world’s top female surfers she has a dream of winning the World Championship medal and won’t give up until she does. Growing up in a small town in Australia, Fitzgibbons knew she wanted to be in the ocean from a young age. She spent all of her time at the beach, learning to surf and experiencing the thrill of the waves. At just 14 years old Fitzgibbons won the ASP Pro Junior Open, an event that had previously only ever been open to over 21 year old’s. Her successes began at a young age but that didn’t slow her down. Today, Fitzgibbons competes in surfing championships all around the word as part of the World Surf League and has created her own Surf Community encourage fitness and a healthy lifestyle.

Aside from her day job, Fitzgibbons makes up one third of the Breitling Surfer Squad. Alongside Stephanie Gilmore and Kelly Slater, the Surfer Squad represents the brand’s diving watches, including the Superocean Heritage II Chronograph 44 Outerknown watch. Designed in a collaboration between Breitling, world champion surfer Kelly Slater and sustainable clothing brand Outerknown, the watch features a strap crafted from ECONYL yarn. The innovative material is created from nylon waste found in discarded fishing nets around the world. Here we discuss with Sally her passion for what she does and how her core values in life are parallel with the spirit and values of Breitling.

How did you come to know you had a passion for surfing?

Even answering that question brings me so much joy because as a young child I was introduced to the ocean as soon as I could swim. The beach became our playground so I was riding a boogie board (the one where you lay down) from the age of three or four. Then I graduated to go out to the back of the break; my dad would take me out on a long board. The first time I stood up I remember standing there and feeling lightweight but the board was so big and heavy and it was the greatest feeling. You can’t believe you’re riding this piece of foam on this energy that’s created by a something natural. All the thoughts in the world just fade away. I think that’s why I see a lot of people go to the sport of surfing for an escape and a purity and that’s the way I try to live my life. Although it gets fast paced and sometimes it feels like you’re trying hard for results, I just always think back to the purities and that I started riding waves because I loved it.

How does your choice of career add to your character and personality?

I think what it has added to my life is that it’s a really grounding energy so you just feel like you respect everything around you all of a sudden. It’s greater than you are, it has this power that’s insane. You can’t fight it you just have to go with it. You accept a lot of things in life and then you hop back out to the ocean and you feel like everything’s OK. So it gives me a lot of perspective in my life. I’ll be loving it unconditionally well into my older years, I want to be that person that surfs to 100, maybe without a competitive jersey.

There is a new awareness and hype related to female empowerment – what are the challenges that you have had throughout your journey?

This whole movement, it’s a feeling, even when I think of it I can feel it in my feet and my hands, it feels great. I started riding waves not because it was a male sport or a female sport in fact I would often forget that I was the minority out there. Sometimes there would be a hundred men and I would be the only woman. I didn’t think I was any different. I knew that in order to earn your right to a wave you had to be out the back in the most critical part on the break and you had to be determined and courageous and fight for your space in the line-up. No one was going to give you waves, and without being on the waves I don’t think you can become a competitive surfer.

There was something deep inside me that looked around and knew I had to own my space from such a young age and definitely own my big dream. It was hard. I was from a very small town of just two hundred people and I always wanted to be the best surfer in the whole world. Everyone thought it wasn’t possible but I knew I had to stick to it. It was a hard goal and I had to persevere.

With this movement, in 2019 things will change on our surf tour, we now have equal prize money and equal working conditions. All these things have come about because female surfers are not letting anything get in their way and I think the women’s empowerment movement has come through as the aftermath of that and now we’re all running together so it’s pretty amazing to feel empowered. 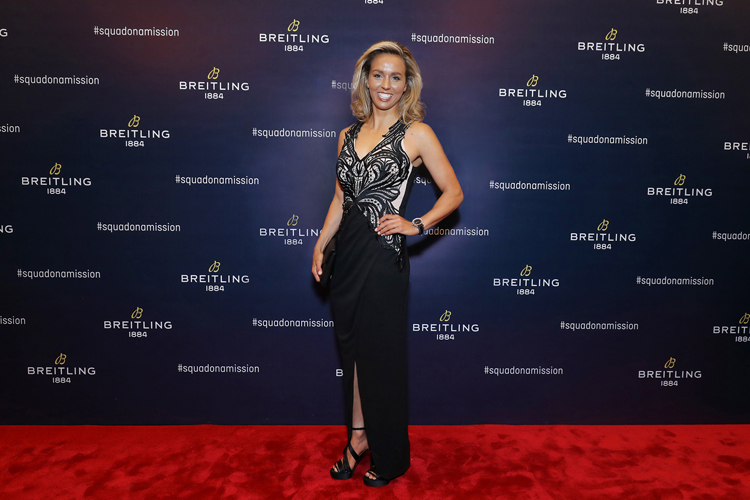 What’s a dream you still aim to achieve?

I want to become World Champion. I’ve had a lot of runner up finishes. I’ve had a very successful career which is something that I’m proud of and I’ve had to overcome a lot of challenges, but I just have this idea of what my best can be and it’s constantly evolving. I think for me that almighty challenge of becoming world champion is what I need. I’m right on the edge and you have to be really brave to jump out into that zone where it’s quite scary and you don’t know what’s going to happen next, but you go anyway! If I can trust myself and use all my core values, for me it’s something that creates a lot of feeling and that’s why I’m so attached to it because it makes me really excited about life.

What are the common codes between you and a brand like Breitling?

I think as a surfing culture and as competitive surfers there is a parallel between Breitling as they have pushed their limits for so many years. They have a rich history but they constantly challenge themselves to make the next timeless piece. They wanted to share not just something that you wear on your wrist but a community and an empowering feeling when you put something on which is a truly unique experience. When you look at our Surfer Squad we have even competed against each other but we have a very respectful rivalry. Kelly Slater is someone who changed absolutely everything in our sport. He can pick and choose which pathway he wants to go on, and by him picking the Breitling Squad opportunity it’s telling us that this is something meaningful that’s bigger than just an individual partnership. For us to come together and have this goal and not only raise awareness but keep challenging ourselves and leave behind the message of what our environment is about and preserving that is really special. And we are educating people to clean our oceans along the way, it feels like we put this watch on and we show people what we can do and hopefully that will influence people to buy that piece and be a part of it.

Which watch is your favourite from the collection?

I love the Superocean watch at the moment because it is part of a culture and a movement and a chance to be a part of something bigger. It shows what we can do with all the trash we find in the oceans. It’s not so much that plastic is such a bad product, it does work well, we’re just not reusing it in the way we should be and that’s creating a problem for all of us. Kelly and Breitling have thought outside the box and said “wow there is all of this pollution that we can turn into a nylon strap”. It shows that you can have such a quality product without compromising its look and value. And you’re giving back to the planet which means you’re part of something bigger so it’s great.

If you were given the chance to co-design a watch with Breitling featuring sustainable components, what would you do?

That’s a great question! I guess in terms of surfers, we break a lot of surf boards, maybe as those surfboards break down we could use the materials within them to create a durable product. That would be super awesome.

When I think of what the current collection has on offer, it’s already got for me the ultimate designs within it. I wear my Superocean when I’m out there competing and pushing my limits, and then I can put on the most elegant piece for the evening. I think for me it’s not so much redesigning the product that’s already amazing, it’s about empowering the communities that are each part of the collection. If I chose a colour it would be blue – I love the ocean so blue is my favourite colour. I would like to see yellow features on it too as that makes me smile. 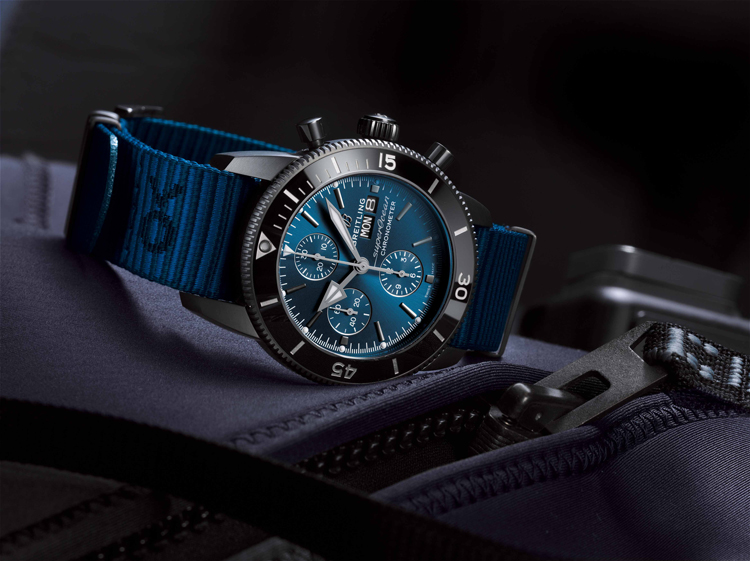 If you achieve your dream and win the world championship, to whom would you dedicate it?

Over my career so far so many people have stopped to give their time and energy to me, cheering me on a wave or at training or even when I’m running around town doing my fitness sessions. It could be a grandma or young kids, but I think these are the people that I would dedicate it to. Everyone that’s contributed just a moment of time to me and encouraged me. That to me is priceless. Trophy or no trophy I look at all the moments that I’ve shared with people all around the world and I would want to say thank you.

Surfing is becoming a new hype in Dubai – what do you advise aspiring surfers?

I tell them that it is possible. Surfing is going to new heights with wave technology and it’s debuting in the Olympics in 2020, so it’s going to open doors for so many people to not just have the idea of what surfing could be like, but to try it. I think we could be seeing surfers coming from inland countries that have never even seen the beach and they could be absolutely amazing. Just have an open mind and try it. More importantly hopefully you will get to experience what the surf community is about.

To what do you say no?

Anything that compromises my values.

Dreaming so big – but then I smile.

Are you currently reading a book?

Yes, I would recommend a book by Kelly Clark, the snowboarder, it’s called Inspired.

How would you describe Breitling in one word?