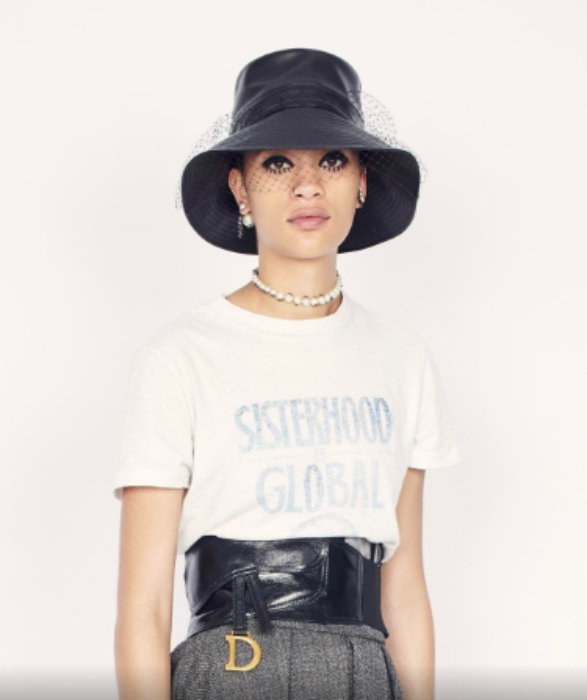 From the get-go of her Autumn/Winter 2019 show, Maria Grazia Chiuri made it very clear she’s set out to make a statement with her latest Dior collection.

Through no mistake, the Italian designer sent her first model onto the runway in a simple T-shirt that read the slogan: “Sisterhood is Global.”

Now, Dior’s Artistic Director has given a little more insight into the meaning behind the garment and the wider collection at large.

Taking to Instagram, Dior explained that feminist poet Robin Morgan was a major inspiration for the line, and the slogan paid homage to her literary works and feminist think-tank.

Morgan recalls how she received an email from Maria that she initially thought was a hoax. It read: “I am very interested and committed to feminism and I love your work and I would like to do these T-shirts.”

After the two met in Paris, Morgan recalls how: “When we actually met, we just fell into each other’s arms and said ‘ma sœur, ma sœur!’ [my sister] and spoke as women and political beings and as artists.”

On teaming up with the first woman to head up the house of Dior, she added: “The influence of clothes these days, in this world, is enormous, whether one likes it or not. It trickles out and trickles down. And when she said she wanted to do the three anthology titles I thought… ‘Well okay, a t-shirt is better than a button.”

Money from the slogans tees will be going to the Sisterhood Is Global Institute, which was founded by Morgan and the late Simone de Beauvoir along with women from 80 other countries in 1984. The SIGI is an international nonprofit orgnaiisation that has functioned for three decades as the world’s first feminist think-tank.

Before the show unfolded on February 26, Dior also explained that the collection took inspiration from a poem by Tomaso Binga about a woman who chooses a masculine pseudonym to parody the privileges reserved to men. A sentiment that was clearly portrayed throughout the collection.