The Textile History Of Fendi

SOME OF THE WORLD’S MOST SKILLED CRAFTSMEN AND THE ABILITY TO BELIEVE AND INSPIRE MAKES FENDI WHAT IT IS TODAY. 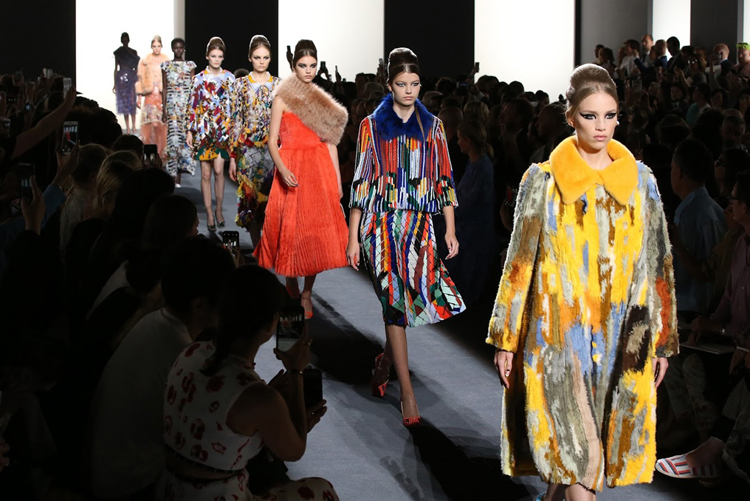 Founded in 1925, Fendi has a unique 90 year heritage. Famed for its fur and leather creations, today Fendi is one of the powerhouses in ultimate luxury, iconic accessories and exquisite ready-to-wear and Haute Couture collections, as well as having the the ability to work with fur in a way no other luxury fashion house does. Three generations of the Fendi family and of course more recently with the support of Karl Lagerfeld, have worked to make Fendi what it is today, creating unprecedented inventions and ground-breaking designs in the art of fur and leather over the last ninety years. At the very heart Fendi is the savoir-faire of the House’s artisans who, over the decades, have invented endless technical possibilities, working with the most exquisite materials, using the highest level of craftsmanship. This is something Fendi strives to support and encourage today with the younger generations, ensuring their unique support to Italian artisans is sustained for decades to come.

Adele and Edoardo Fendi opened their first store in Rome in 1926. The husband and wife experimented in a fearless way with precious fur that had never been done before, and this has continued to drive Fendi’s collections until today. One of the first pioneering inventions was the Intreccio weave, which used strips of lambskin to create the first soft leather bags, a modern alternative to the rigid leather bags before. As the house grew, the family’s five daughters Paola, Anna, Franca, Carla and Alda joined in the fifties. This was when the first fur entwined with velvet and grosgrain ribbons transformed the fabric into a decorative surface in a way it had never been done before.

THE ERA OF LAGERFELD

After thirty years of being a family business, Fendi enlisted the assistance of forward thinking German designer Karl Lagerfeld. Lagerfeld joined the house in 1965, taking on the role of Creative Director for Fur and later Women’s Ready-to-Wear, which he launched in 1977. Lagerfeld made it his goal to change the way fur was used. Developing new techniques in collaboration with Fendi’s artisans he used it as a light and versatile fabric for the first time. Removing heavy linings, creating endless possibilities of experimentation with the fabric. Of course the natural progression was to developed a ready-to-wear line that would incorporate these unique techniques and take the brand to the next level. In 1985 Rome’s National Gallery of Modern Art dedicated Italy’s first fashion exhibition at a national museum to Fendi. Iconic garments were exhibited alongside fur panels that each showcased a different inventive technique for working with the luxury material, displaying the extraordinary lightness, malleability, and intricate inventiveness of the artisans’ workmanship. 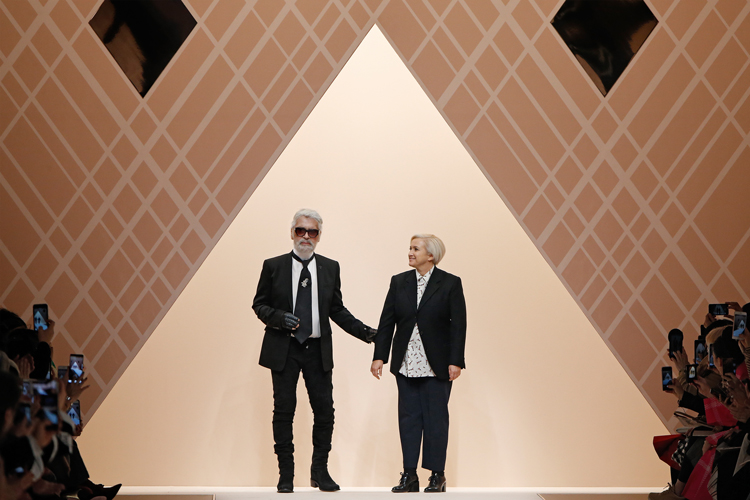 In 1994, Silvia Venturini Fendi, daughter of Anna, joined to work alongside Lagerfeld as Creative Director of Leather Goods and Accessories. Silvia was responsible for inventing the now iconic Baguette bag which is still today internationally recognised as one of the world’s ‘It bags.’ The Baguette has over 5,000 interpretations and has served as a canvas for the innumerable skills of Fendi’s exemplary artisans and elevated a bag to the level of art. Silvia went on to create Fendi’s Peekaboo bag and the Scelleria which have both become icons in their own right. 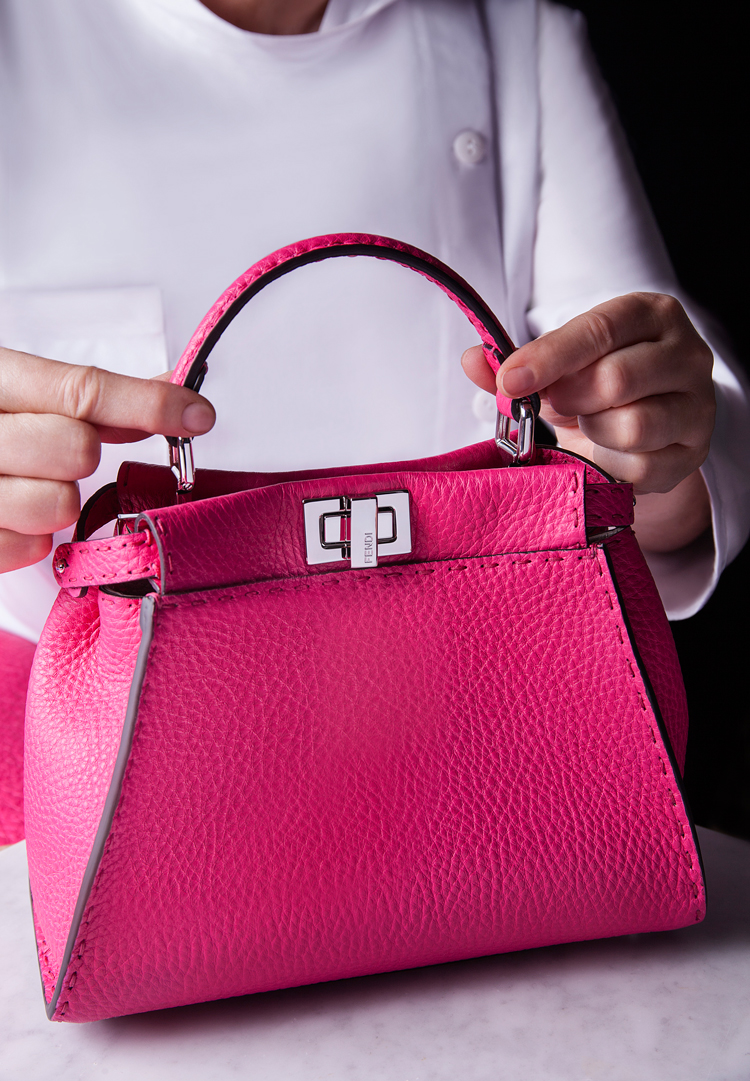 A HOME TO BE PROUD OF

Since the beginning, Fendi has treasured its skilled artisans and entirely unique methods. This was recognised in 2015 when Fendi moved its headquarters to the Palazzo della Civiltà Italiana in Rome. This iconic monument is an example of Rationalist 1940’s architecture and is also known as the Square Colosseum. The building was designed in 1937 to host the Mostra della Civiltà Romana during the 1942 World Fair. Created by renowned Italian architects Giovanni Guerrini, Ernesto Bruno La Padula and Mario Romano, it has become a symbolic landmark in the Italian capital. After undergoing renovation between 2003 and 2008 this iconic building became the home of Fendi in 2015. Today the Palazzo della Civiltà Italiana houses Fendi’s business, design studio, its heritage and craftmanship all under one roof. Perched on a hill overlooking the city this iconic building houses the magic of Fendi.

Fendi celebrates Italian craftsmanship, and that is why at Palazzo della Civiltà Italiana you will find the most skilled artisans turning designs into reality. Craftsmen work alongside apprentices showing how the proper wielding of a surgical blade and flick of a wrist create the delicate precision cuts needed to make Fendi’s intricate, puzzle-like compositions of fur and luxurious material. Fendi celebrates the concept of ‘made in Italy’ and within the Palazzo della Civiltà skilled artisans bring to life the vision of Karl Lagerfeld and Silvia Venturini Fendi. 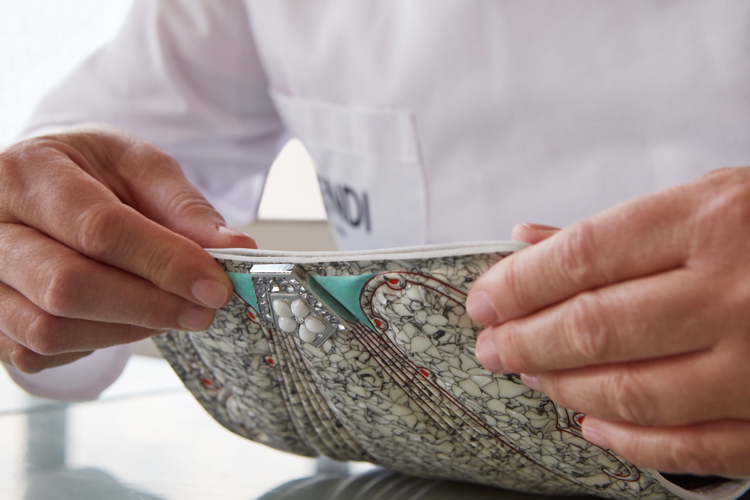 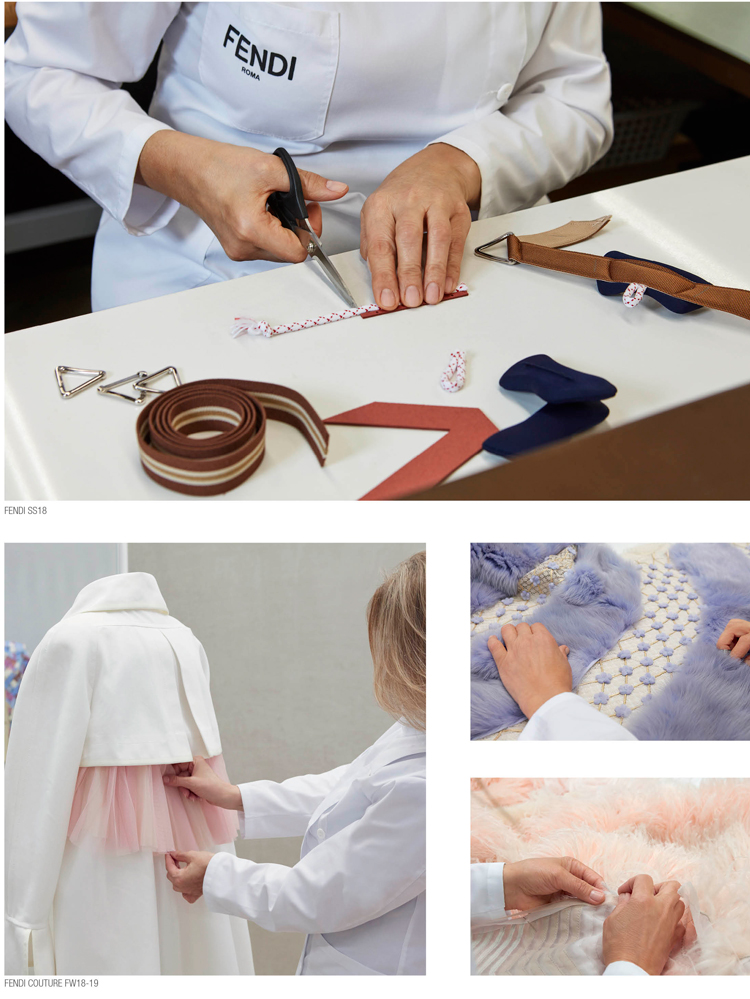 In 2015 Fendi expanded its portfolio to the world of Haute Couture with its first ever Haute Fourrure Collection, designed by Karl Lagerfeld and presented in Paris. Haute Fourrure explores the most extraordinary ways of working with rare and precious furs, combining it with elaborate embroideries and breath-taking techniques including the herringbone method of Gheronatura, and the introduction of new techniques including the silver fur effect. In 2016 Fendi returned for a second collection that saw the House put on a unique fashion show within Rome’s iconic Trevi Fountain. Enchanted fur and gowns, hand-painted pieces, beading, embroideries and one of a kind methods using flowers and feathers highlighted the incredible abilities of Fendi’s highly skilled craftsmen. At the same time, the exhibition FENDI ROMA – The Artisans of Dreams at Palazzo della Civiltà Italiana highlighted the unique fur craftsmanship and creativity, and distinctive elements of Fendi’s core values. 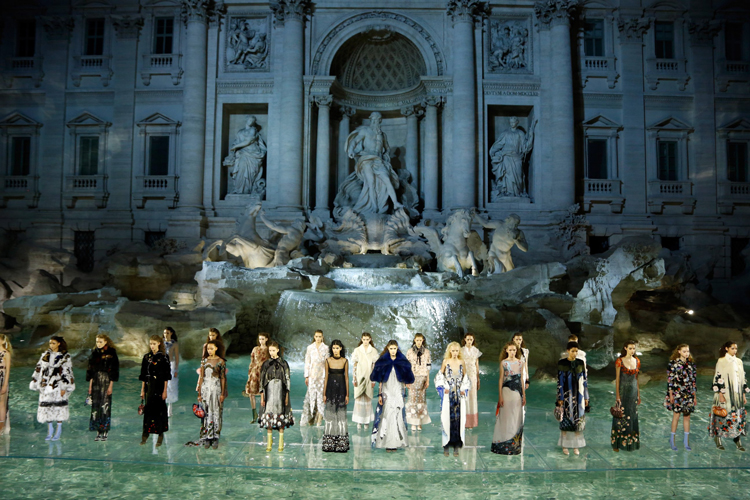 THE PROCESS OF DESIGN

Within the Fendi headquarters is a unique fur workshop. The only one of its kind, the concept is home to forty expert artisans who were trained in-house on the pioneering techniques that make up Fendi’s designs. Here, the younger generation trains alongside veterans of the Fendi workshop, ensuring the continuation of artisanal mastery. One single fur coat can take up to six months to complete and the process is fully undertaken by hand, following meticulous techniques.

Each garment begins as an idea from the designer. From there, artisans led by the master cutter develop the idea into a pattern. This sparks a lengthy process of experimentation. Techniques are tried out to identify the perfect method for creating each particular design. For fur designs Fur Tablets are created. These 40cm square text pads are used for trying out and inventing a combination of techniques until the desired result is achieved. Sometimes hundreds of techniques are tested as the artisans work like artists to achieve the optimal result.

At the same time, under the close guidance of Karl Lagerfeld, the Première brings to life the sketch as a paper garment model. Once adjusted this is sewn together in white muslin. The carefully developed fur technique is then elaborated as a full garment pattern and laid out on the muslin with hand-painted pixels indicating every centimeter of fur. The muslin matter forms a guide for the artisans as they cut and sew together micro pieces of fur to form the total pattern of the garment. Each piece is cut by hand so the utmost precision is required from the craftsmen. Fendi furs are often left unlined — a tribute to the expert level of craftsmanship visible on the inside that creates the dramatic and inimitable surface on the outside. 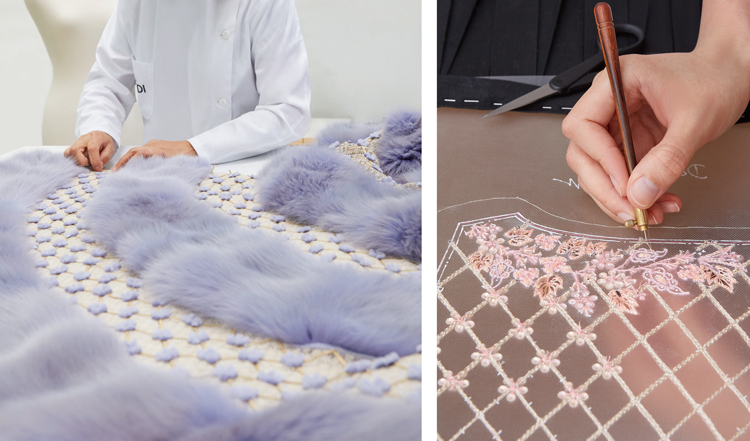 Fendi’s creations wouldn’t be possible without the sourcing of unique leather and furs. Every pelt and hide is carefully checked by hand by a fur expert, and only the most beautiful and perfect parts are selected and paired by the artisans who will turn them into works of the highest level of craft. Fendi adheres to the highest ethical standards and operations in full compliance with all international regulations monitoring fur trade and it does not trade in endangered or threatened species.

Fendi participates in the Sustainable Luxury Group Business for Social Responsibility, working towards the objective of a more transparent and sustainable industry. Fendi’s mission is to obtain the highest quality material from as ethical sources as possible. Throughout its history Fendi has experimented with fur and been at the forefront of revolutionising techniques. Many of these were invented by the house and pushed the boundaries of handicraft.

Fendi first introduced fur woven with grosgrain and velvet ribbons in the 1950s. It was the first step towards a soft fur with an artfully composed surface. Strips of fur are alternated with bands of grosgrain or velvet, creating a horizontal linear effect in the surface, but also leavening the coat significantly, allowing a woman more movement and a more flattering silhouette.

Fur was only available in its natural colours until Fendi experiemented with colouring techniques that allowed the colour of fur to be changed. This style was first introduced in 1966.

An intricate style introduced in the 1970s that cut fur into tiny pieces and then overlapped them and sewed them piece by piece to create a surface that resembles the tiled roofs of Italy’s traditional houses.

In the 1970’s Fendi shaved fur to create a new texture both with dégradé lengths and an even surface. The evenly sheered effect is used to create strongly linear and geometric designs and was inspired by the view of a just-cut field.

For the Haute Fourrure collection in 2015-16 a new process of sealing pure silver to soft fur tip was developed. This gave a soft fur finish with a precious metal finish and was coined silver fur.

Inspired by an 1920’s illustrated book of birds, Lagerfeld invented fur mixed with feathers. The technique created an extraordinary and surreal surface when the two materials blended together.

A painstaking process of hand-sewing fur with sequins and beads to create a newly embellished surface with the effect of a rich deep velvet.

Most recently in 2017 Fendi found a way to bleach and dye sable fur in multiple colourways from pop orange to red, yet still maintaining the softness that characterises this precious fur.