As the fashion parade moves from Milan to Paris, we look at the Spring/Summer 2020 style highlights debuted in the French capital this September. 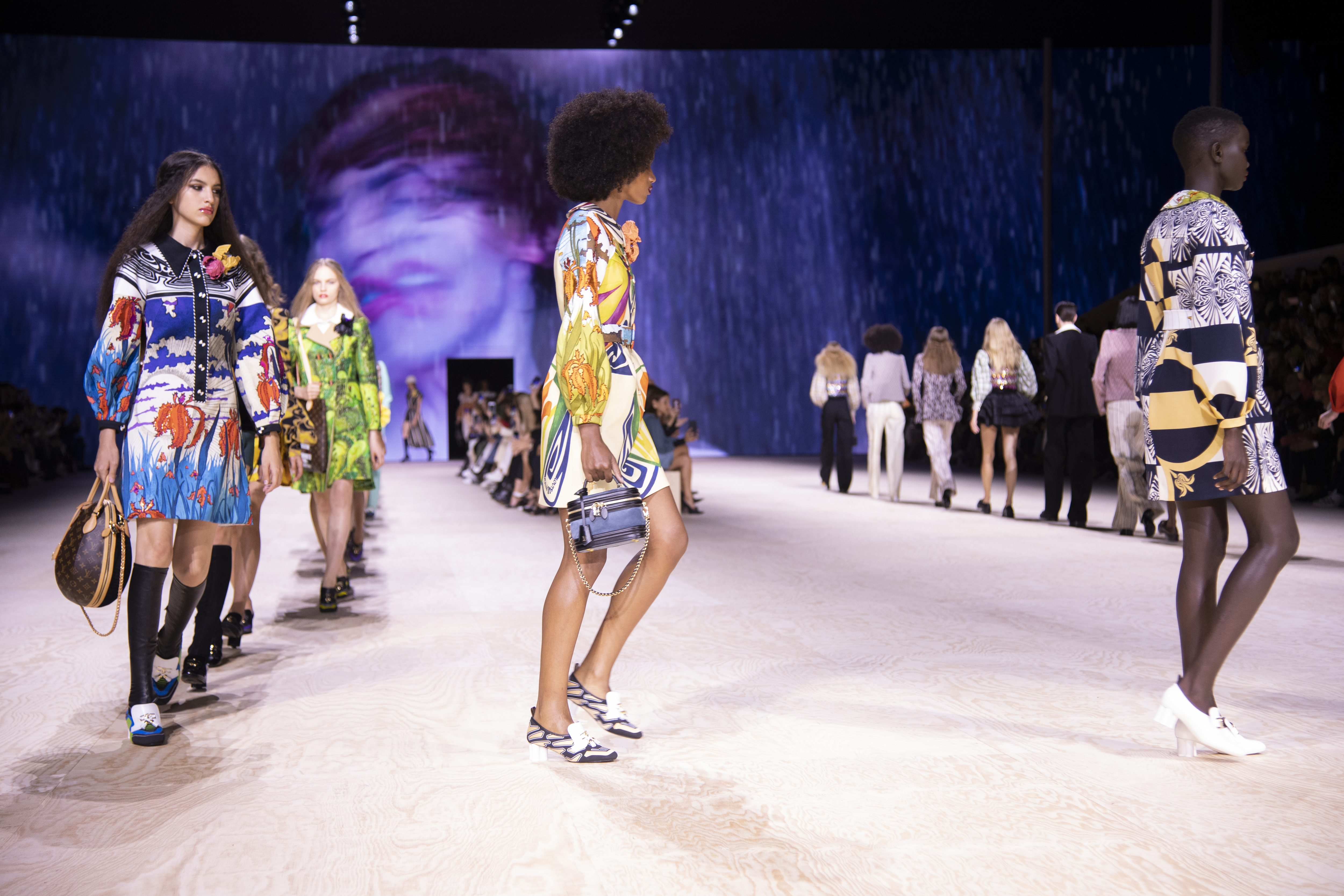 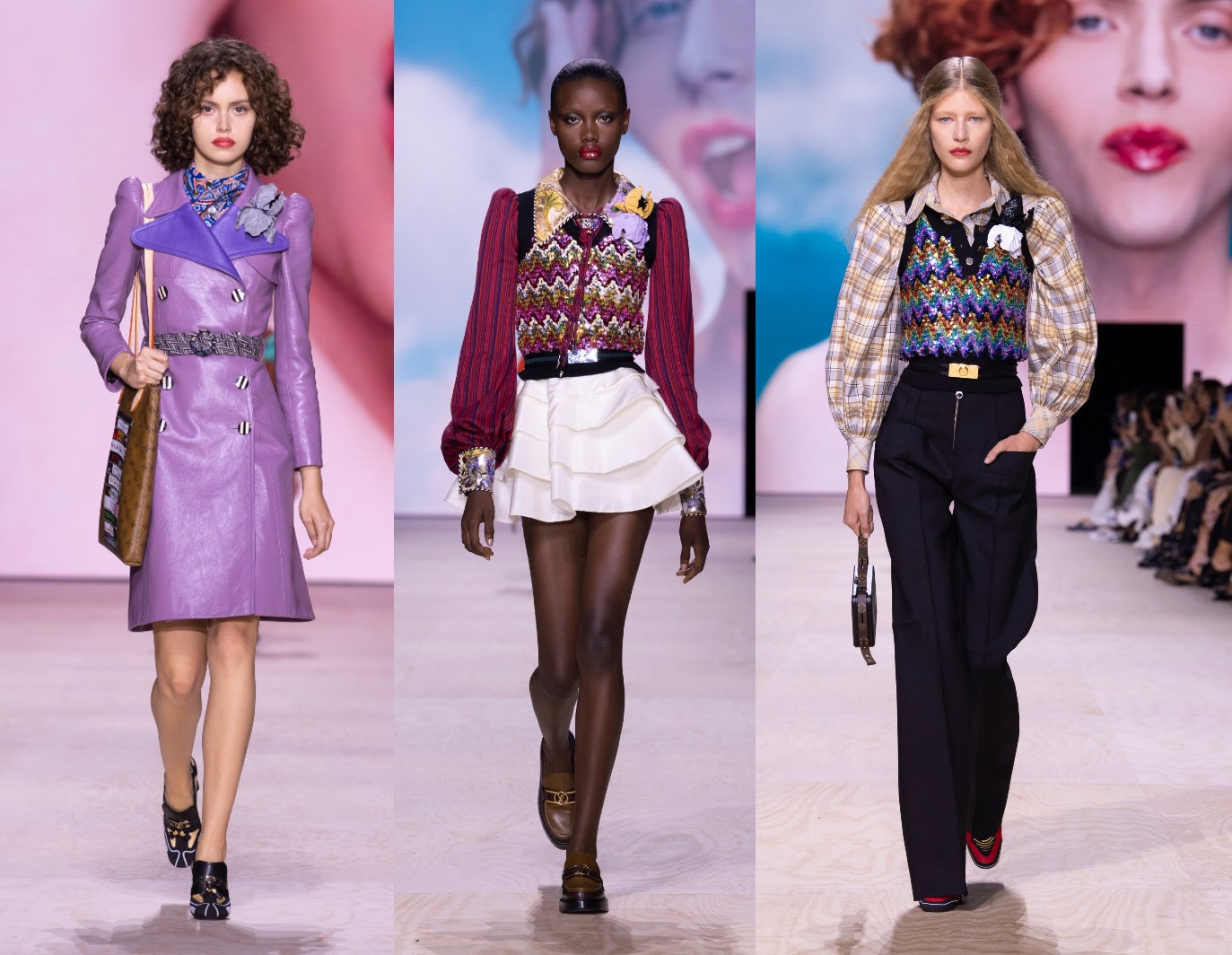 It was the last show of the season, meaning Louis Vuitton had to deliver something memorable to seal off Paris Fashion Week for another year. For the Spring/Summer collection that will take the French fashion house into a new decade, Creative Director Nicolas Ghesquière tried to call to a new Belle Époque – an era predating the wars of the world that oozes a sense of comfortability and settlement, bringing together the 20th century with the nostalgia towards it from the 21st century. The designs saw chevron blazers worn over a waistcoat and checkered shirts, ruffle skirts teamed with shirts and sequins, peter pan collar dresses with buttons and verticle stripes and so on. Our favourite accessory was the VHS style handbag, sure to tug at the strings of nostalgics everywhere. 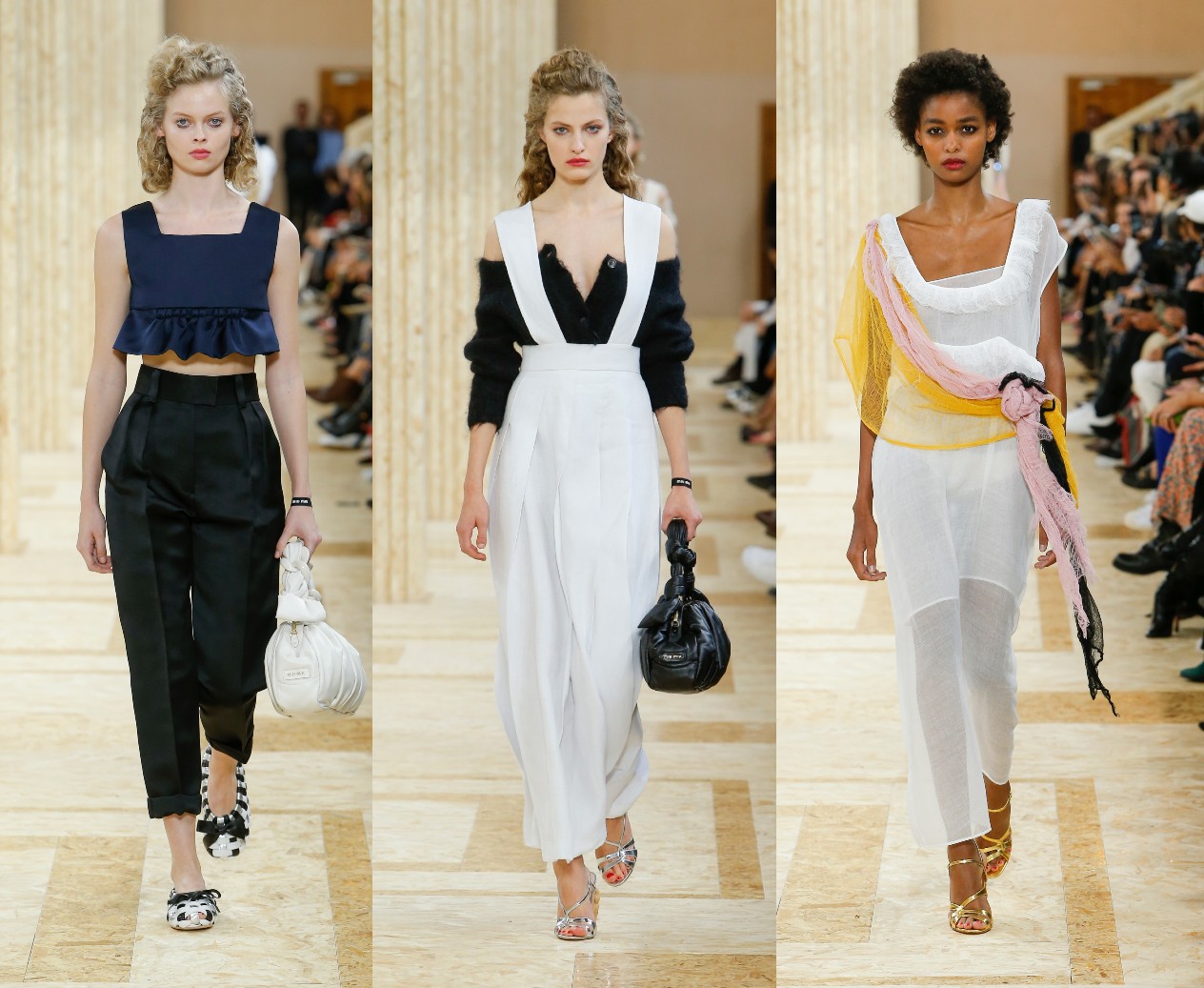 This season from Miuccia Prada, we were gifted a ready-to-wear collection that is just that – every piece for Spring/Summer 2020 is actually wearable in day to day life. For the season, Miu Miu gave a lesson in neutral dressing with black and white forming the landscape, with shades of beige, navy and cream working their way in. The collection aims to be “a proposal of fashion as a process, and a dialogue.” The dialogue in question is between the wearer and the worn, creating the paradoxical combination of the intentional and the impromptu, the serious and the playful. Although the hues and cuts may seem sensible at first, the play comes in with the likes of broken down frills, abstract florals and mismatching buttons. 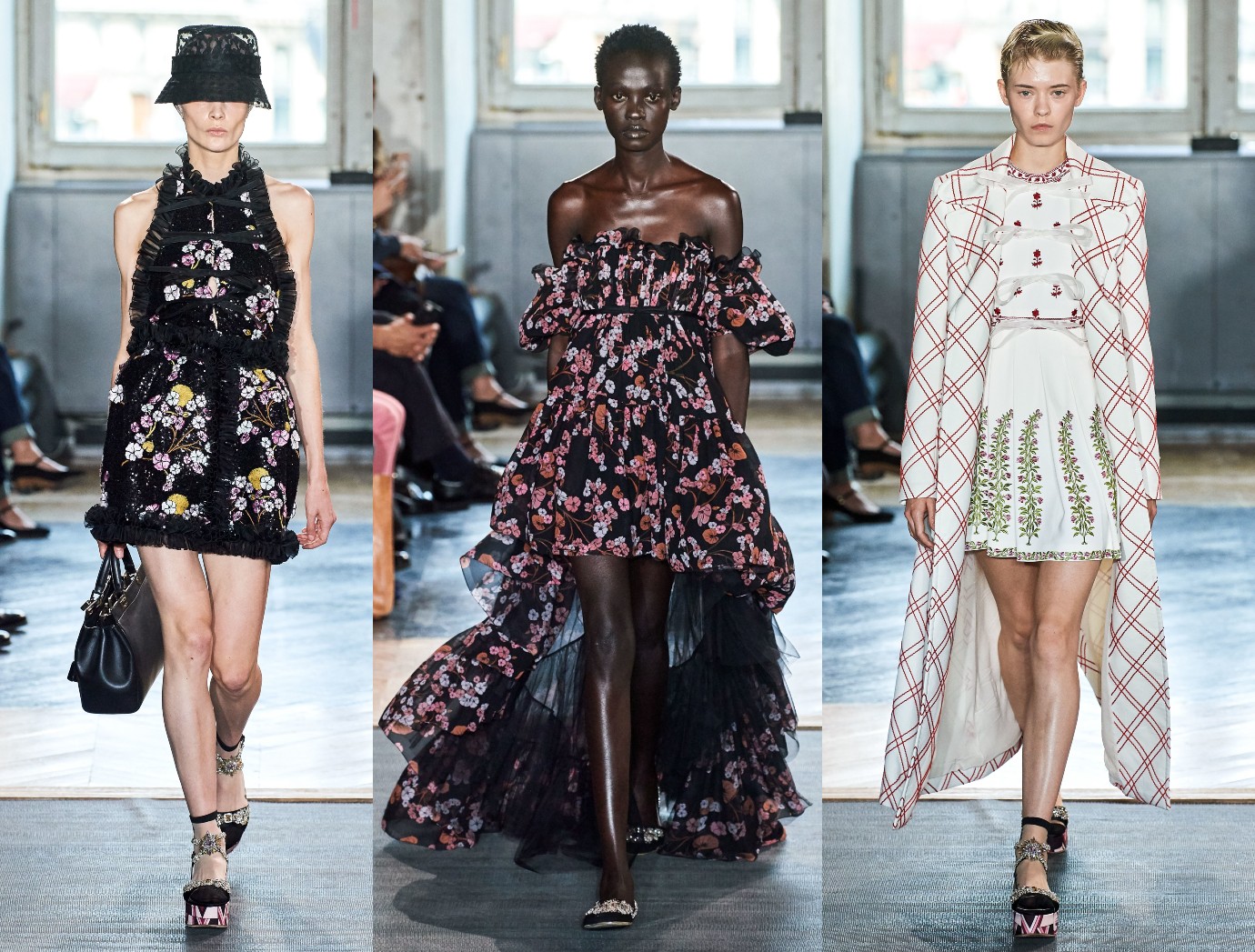 Of course, florals are a given for the season of blooms, but it means something a little different to those at Giambattista Valli, who have a close passion and love of all things floral. Protesting against some of the grungier, tougher approaches to fashion nowadays, Valli is saying feminity can see be pretty and nature-inspired. This time, motifs included wildflowers, sweetpeas on evening jackets and sunflower and mint green hues. Driving the point home, orchids were even used as a beauty accessory for several looks, adorning models’ faces as they walked the runway. 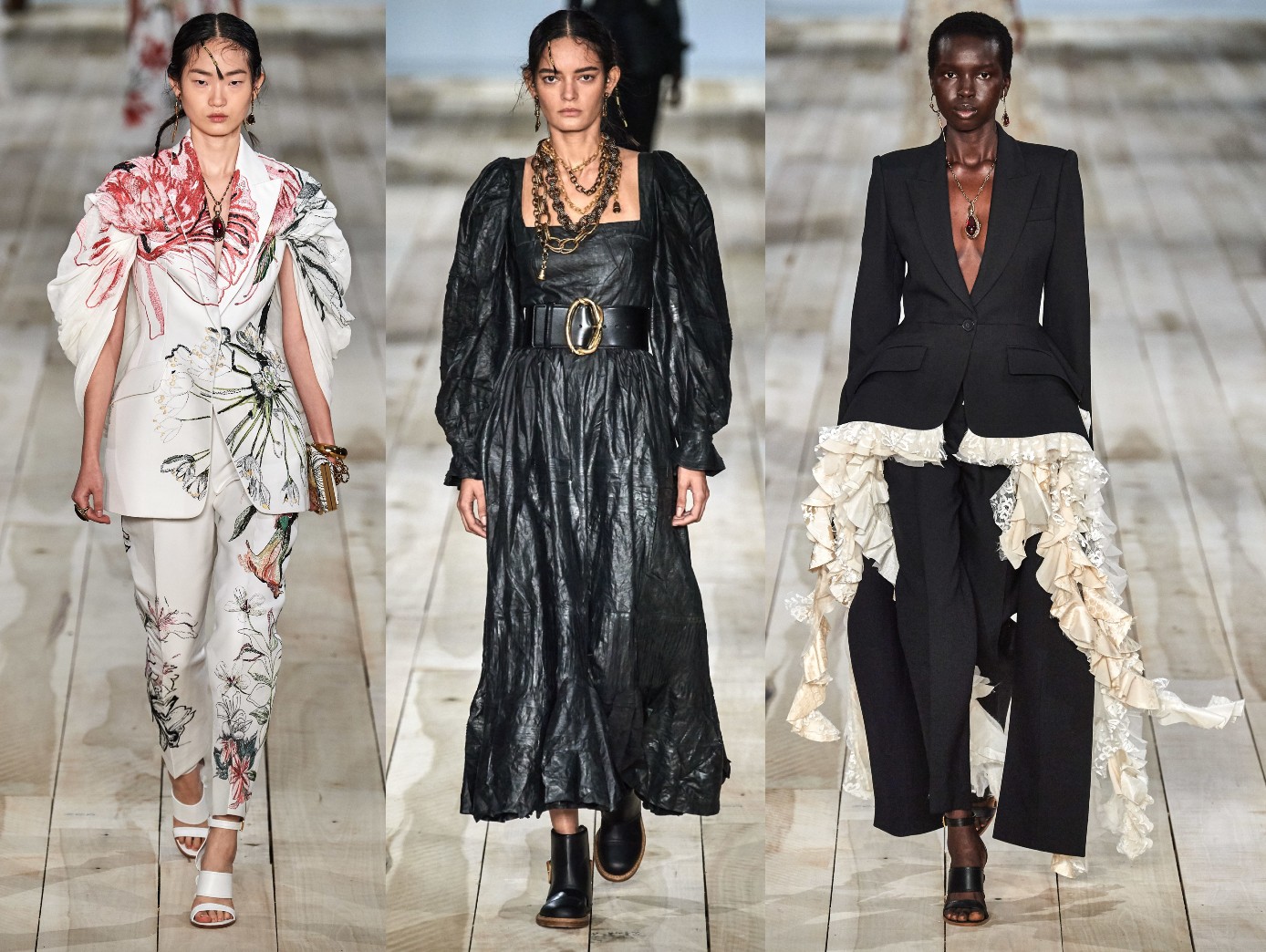 The collection showcased by Alexander McQueen’s Creative Director, Sarah Burton, was not only a marvel to look at – she gave a whole new meaning to power suits and mixed tough leather with dainty dresses in a new way – but there was so much rich context behind the 42 looks, too. For one, the British fashion house upcycled lace, organza and tulle from previous seasons. For another, the collection came as a community effort as the entire McQueen staff embroidered two of the catwalk looks by hand for the runway show – Burton aimed to reflect a yearning for people to take time to make connections. And she truly mixed worlds together with this stunning collection – from suits with cut out details and lace protruding from it to suits that merged into dresses to gowns that were full of texture, colour and fanciful volume. 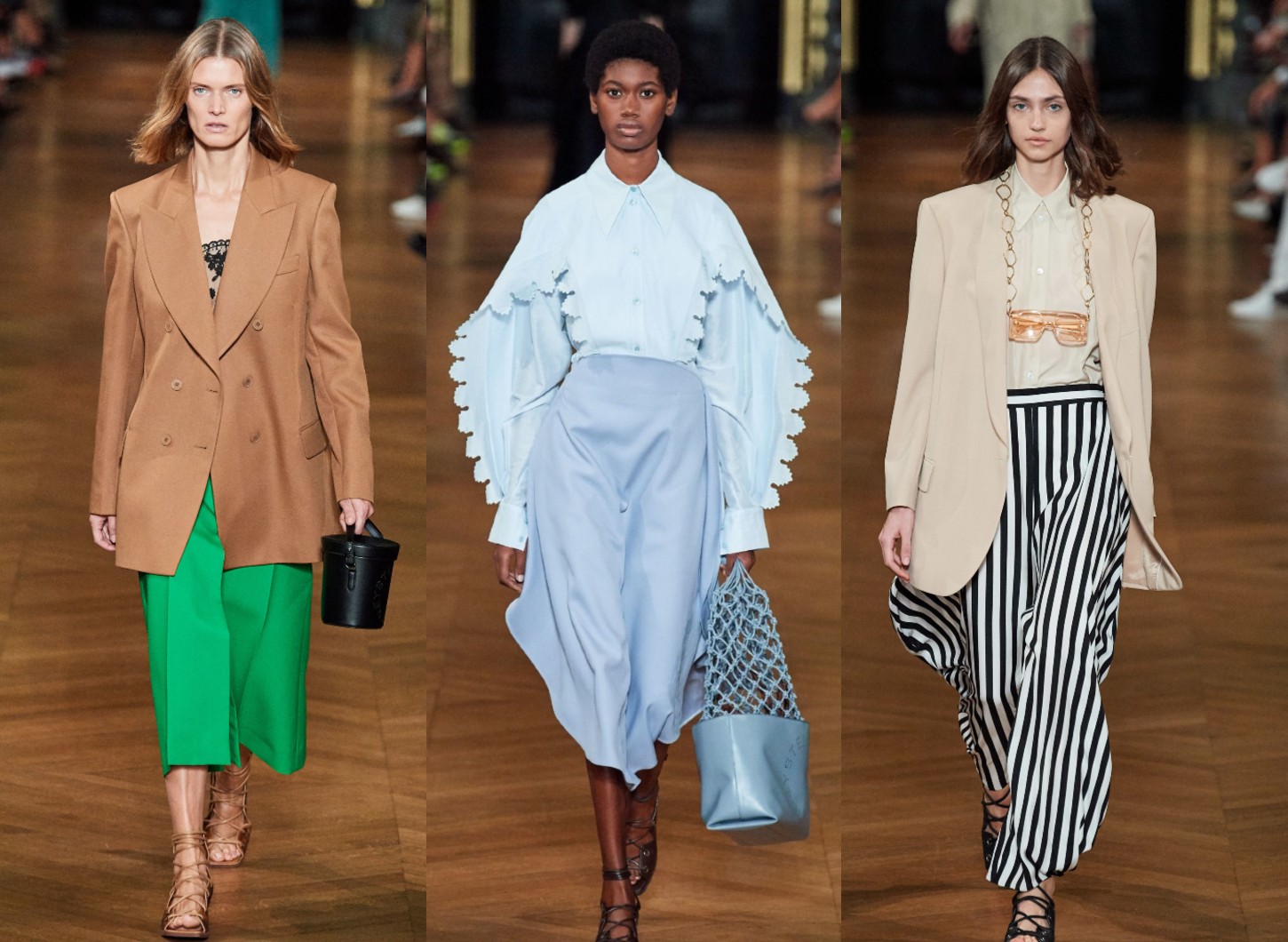 Always a champion in the world of animal rights and ecological sustainability, British Fashion Designer’s desires to contribute well with her work has only grown in momentum in the current climate (scare) taking place right now – of course she was one of the major brands to sign The Fashion Pact ahead on the G7 conference earlier this year. So what did her Spring/Summer 2020 collection bring in that light? Well, the simplistic chic collection in her most sustainable yet, as she claims more than 75 per cent of materials used are eco-friendly. As for the style, she presented at Paris Fashion Week a selection black and off-white pairings with an effortless-style feel such as billowing trousers and an unbuttoned blazer, horizontal striped tees tucked into black culottes and one-piece dresses that slip on with ease. There were powder blue blouses with scalloped sleeves, understated power suits and floral print dresses in a range of cuts ready for the new season. 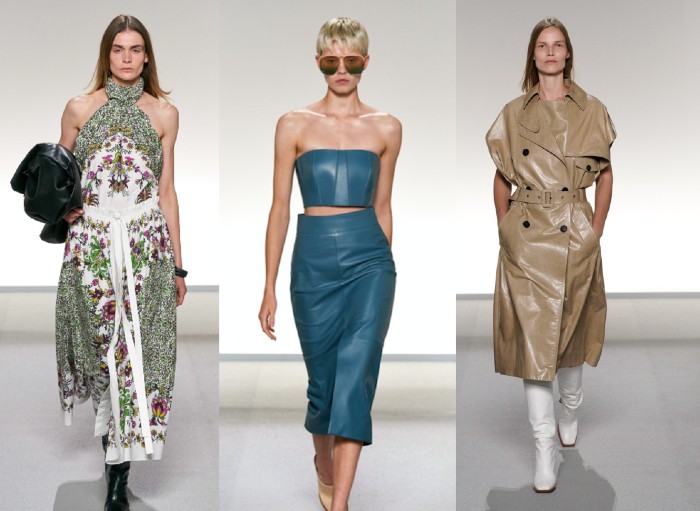 With Clare Waight Keller’s latest designs for Givenchy, she takes the French fashion house to a crossroads; between the balance in the botanical world to toughened-up urban energy. She calls upon the beauty and blooms on old-world Paris and the denim-filled aesthetics of new York City simultaneously – these floral hues and prints being contracte with dulled-tones and all-in-one sleek. The runway saw crisp poplin, canvas and taffeta blouses layered over-skirts and sundresses. Hourglass tailoring sans lapel joins the new suit silhouette of a long, slim jacket and shell-knit Bermuda shorts or a relaxed pant. Smooth leather trench coats, bandana tops and bustiers transform soft drape into something architectural and opulent

Nadège Vanhee-Cybulski, Hermès’s Creative Director, headed back to the house’s traditional routes for Spring/Summer 2020, delivering a sleek and sophisticated collection – just four months after giving birth to baby girl, proving there’s nothing about to slow her down. As for the ready to wear offering, it was a show of leather being moulded into tailored trousers and laser-cut dresses, shell tops with a graphic feel and head-to-toes outfits that mixed different shades of the same colour for a clean finish that’s both luxe but attainable in day to day life. 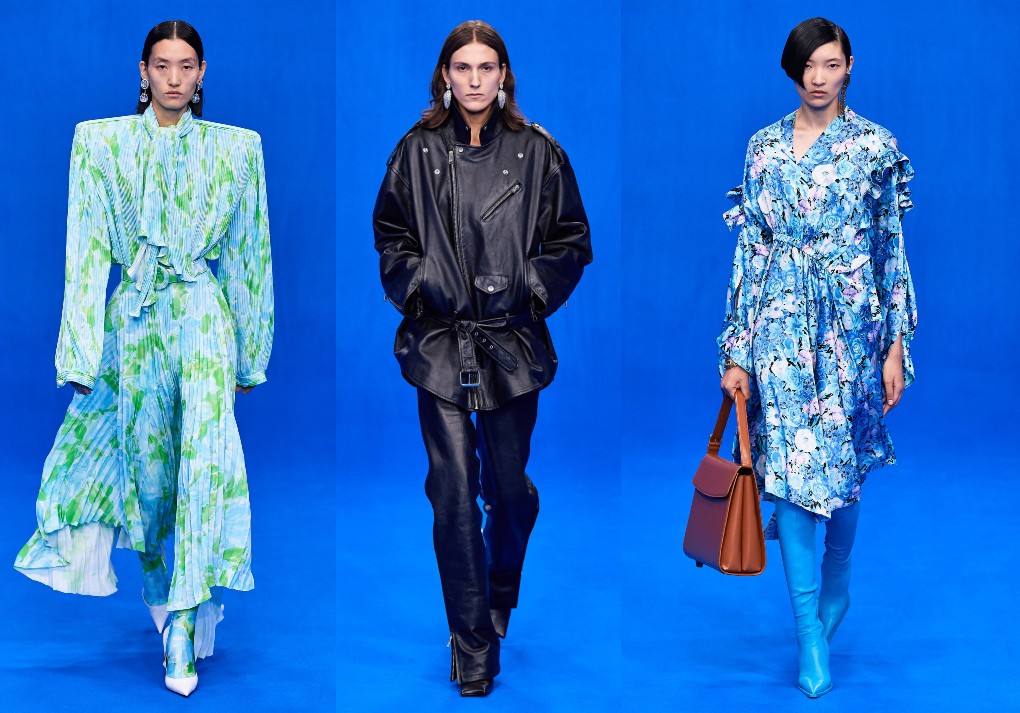 Balenciaga’s Creative Director Demna Gvasalia took on an eternally tough subject matter – least not during the times we live in – when conceptualising his collection for the upcoming season; politics. This was clear from the onset, as the staging reflected a political arena of sorts. As for the collection, it certainly was stern and serious to start, with boxy (yet wearable) shapes and sensible shades of slate grey and midnight black. Deep orange dresses, aqua blue designs and even slogan prints came out against the regal blue backdrop next – the campaign dresses that come in the run-up to an election. 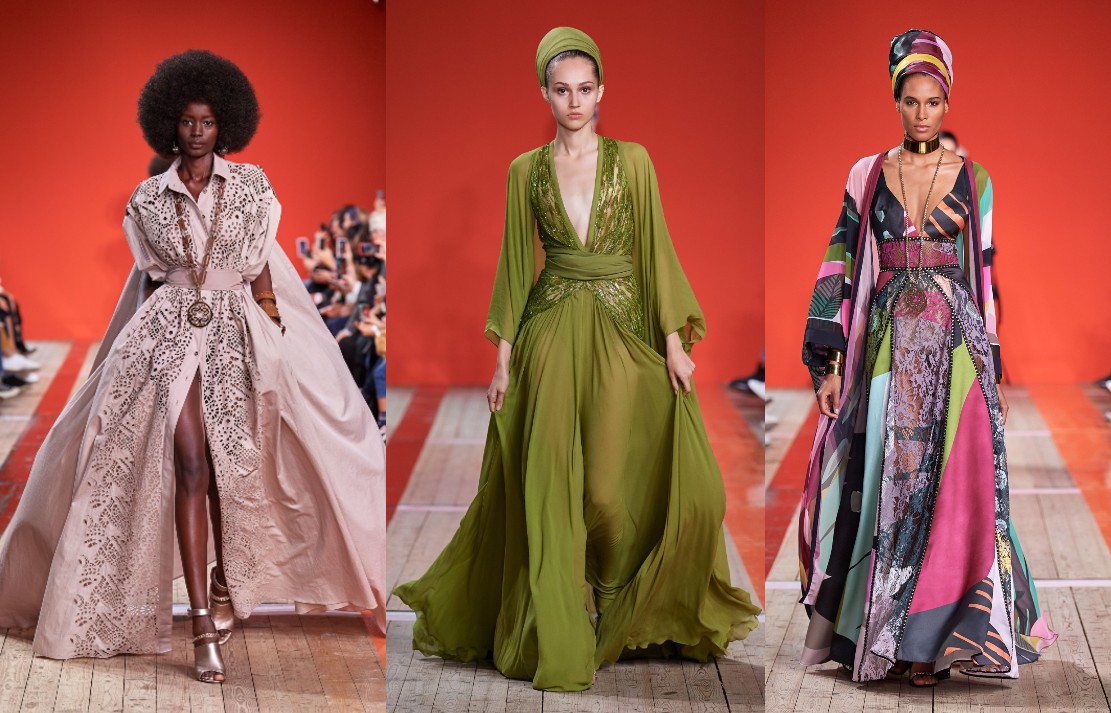 As always, the Lebanese designer has put out a collection that is designed to turn heads on the red carpet that was described as: “a reflection on the diversity than animates the great savannas of Africa.” Full-frontal dresses came in gowns in jersey, cady, taffeta and lace ruled the runway, and more daytime attire came in sandy desert shades and eyecatching prints. The Spirit of the Savanna (as the collection is called) featured African-style jewellery too, from beaded necklaces and earrings and wide bangles.

Another season, another collection influenced by the Sixties and Seventies for Celine. For Spring/Summer 2020, Hedi Slimane showcased the eras in all their slickness – bootcut jeans teamed with blazers, flares that are actually wearable day to day, boho-chic that won’t scare off the straight and narrow. These looks were mixed and layered with effortless style, bringing the best of the era – with some modern touches – to the forefront 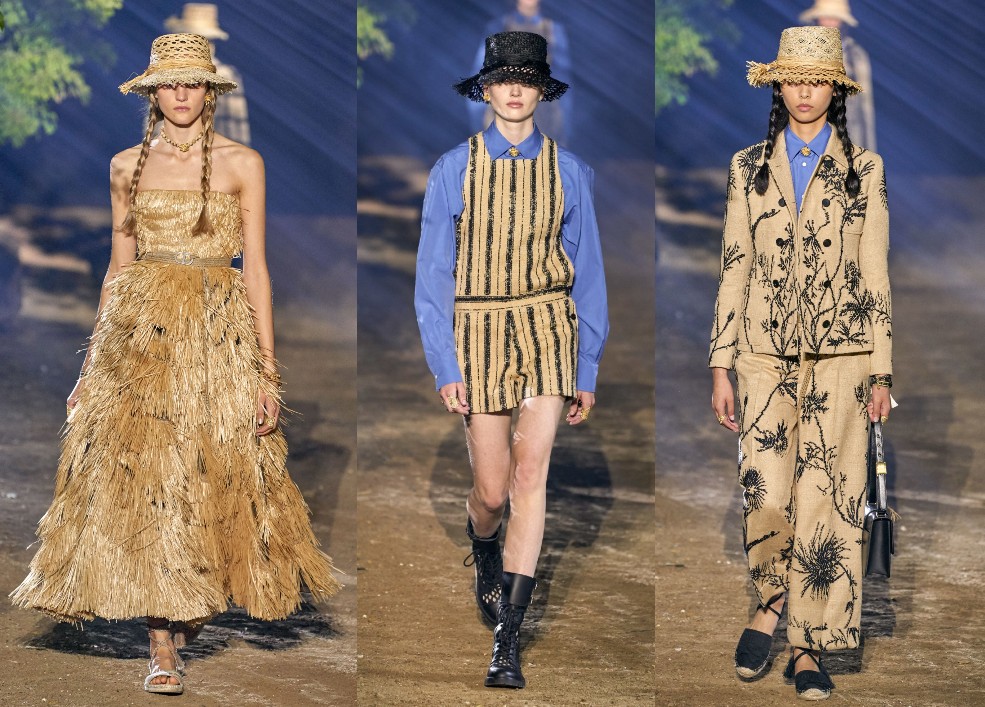 For the new season, Christian Dior’s Creative Director Maria Grazia Chiuri called upon nature as the inspiration behind the colour scheme and fabric choices. But rather than tropical forest greens and exotic animal prints that we’ve seen elsewhere over the last few seasons, the direction took on more of a deep-blue-skies and meadows-of-hay vibe. In fact, Chiuri was inspired by photographs of Catherine Dior – Christian Dior’s sister – in which she appears amid her flowers in the garden, as that was her passion. The designs were presented in the style of preserving herbaria, with unique embroidery and textures throughout. 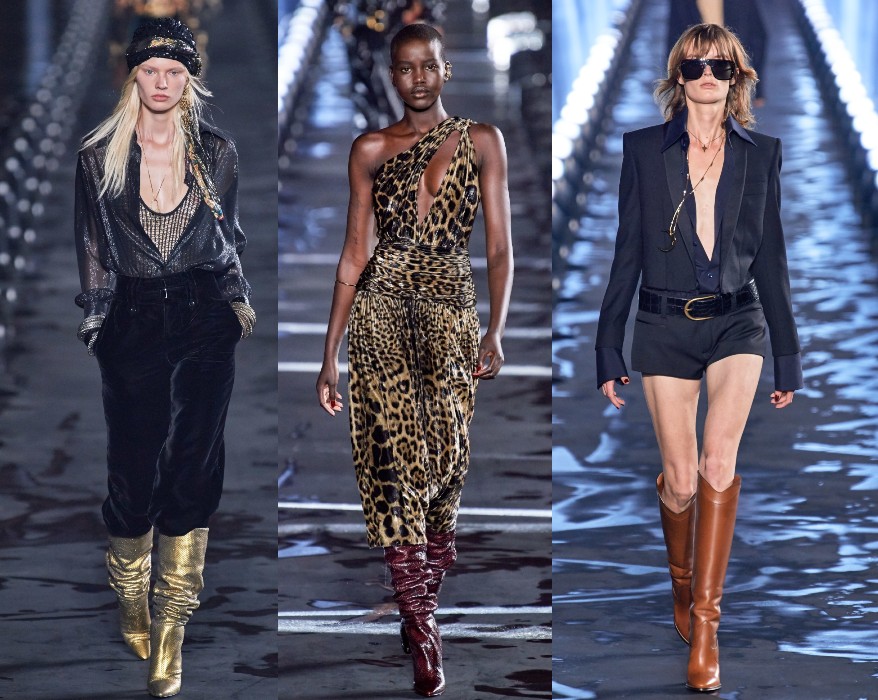 Since taking on his Creative Director role at YSL, Anthony Vaccarello’s runway shows for the brand have taken on a particular identity – almost more or a concert than a fashion runway. For Spring 2020, white beams lit up the outdoor runway, and to follow, models came out donning uniquely tailored jackets over tiny shorts and cutoff jeans, funnel leg western boots, embroidered dresses with paisley patterning, smock dresses, chiffon blouses and animal print dresses. Of course, the collection of signature head-to-toe black finished the show.