The Evolution Of The Met Gala 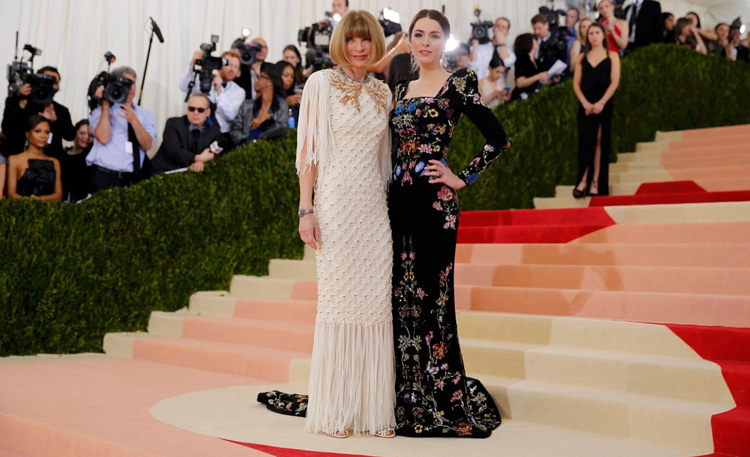 The Met Gala is best known for its star-studded red carpet, but the glitz and glam is only part of the story.

Colloquially and affectionately referred to as ‘fashion’s biggest night out’, the Met Gala is a pinnacle of iconic style. A fundraising benefit for the Metropolitan Museum of Art in New York City, the event welcomes celebrity stars, young creatives, and industry paragons alike. Although the excitement doesn’t stop there, the gala also signifies the highly anticipated grand opening of the Costume Institute’s annual fashion exhibition.

Next month, on the first Monday of May, the Costume Institute will sanctify its love of fashion as it presents ‘Heavenly Bodies: Fashion and the Catholic Imagination’. Designed to create a dialogue between fashion and the masterworks of religious art in the museum’s holdings, the show will be presented in a trinity of locations, the Anna Wintour Costume Centre, the medieval galleries at the Met’s Fifth Avenue location, and further uptown at the Cloisters, however the event will take place at its usual location at the Metropolitan Museum of Art in New York City.

The exhibition will have approximately 180 pieces on display and will highlight the enduring influence of religion and liturgical vestments on fashion. Numerous designers including Dolce & Gabbana, Christopher Kane, Jeremy Scott, and Jean Paul Gaultier have referenced religion in their work, while other names confirmed to be featured are Chanel, Versace, and Valentino. The Vatican will also be loaning 40 rare items of religious significance from its archive, including a papal tiara featuring 18,000 diamonds and pieces worn by Pope Benedict 14th in the 1600s, which will also go on display. 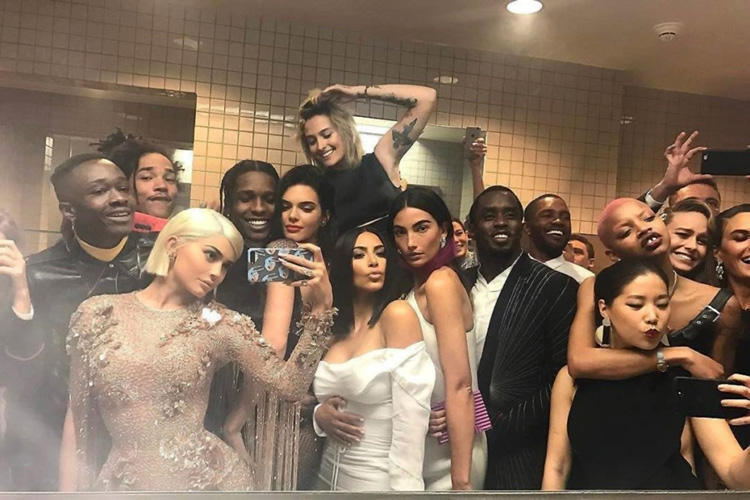 Also impressive are Anna Wintour’s 2018 co-hosts for this year’s Met Gala, which are just as important as the Met Gala theme reveal. Taking over the duties carried out last time around by Katy Perry, Pharrell Williams, Gisele Bündchen, and Tom Brady are three women who are as talented as they are glamorous, Amal Clooney, Rihanna, and Donatella Versace.

So, as May 7th approaches, we look back at Met Gala history to understand the legacy behind this fashion extravaganza. Publicist Eleanor Lambert started the gala in 1948 as a typical philanthropic endeavour for the great and good of New York society, and it has been held yearly since, now serving as an opening ceremony for the exhibit which will be featured for the year at the museum. However, originally the Gala was not to introduce a new exhibit. From the 1940’s until 1971, the Gala was held off-premises in the Waldorf Astoria and various other locations. The event was far less glamorous, and usually consisted of dinner and light entertainment. It was not until 1972 when Diana Vreeland, the editor of Vogue at the time, became a consultant for the Costume Institute and encouraged the group to curate more ambitious pieces. A need for exhibitions of these pieces arose, and thus the Galas were used as a promotional tool as well as a social event for society’s elite.

The Met Gala became known for its luxurious attitude and attention to detail, and as its popularity grew it soon became an event famously driven by fashion designers and industry elite. In 1999, Anna Wintour became chairwoman of the Institute, and began to encourage the attendance of A-list celebrities in addition to those in the fashion industry. As the current editor of Vogue, Wintour used her knowledge of the fashion industry combined with her credibility among Hollywood’s elite in order to transform this blossoming event into the immense spectacle that it is today. 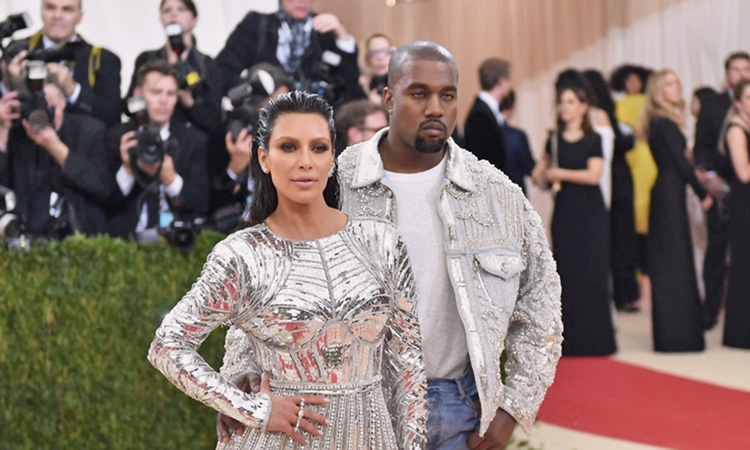 The Met Gala starts with a major exhibition on a changing theme that showcases the museum’s extraordinary holdings. These displays have run the gamut theme-wise, from historical periods, to genres, to individual design innovators, becoming increasingly extravagant over the years. Early themes included, Untailored Garments in 1972, Romantic and Glamorous Hollywood Design in 1974, and Costumes of Royal India in 1985, to more out-of-the-box themes such as Superheroes: Fashion and Fantasy in 2008, Punk: Chaos to Couture in 2013, China Through the Looking Glass in 2015, and last year’s Rei Kawakubo/Comme des Garçons, the first monograph show at the museum to focus on a living designer since its Yves Saint Laurent exhibit in 1983. This year’s theme however is especially noteworthy, as it is being slated as the Met’s most controversial yet, owing to the positioning of these fashion garments alongside sacred artefacts.

20 YEARS OF THE MET GALA

2004: Dangerous Liaisons: Fashion and Furniture in the 18th Century

2009: The Model As Muse: Embodying Fashion

2015: China: Through the Looking Glass

2016: Manus x Machina: Fashion In An Age Of Technology 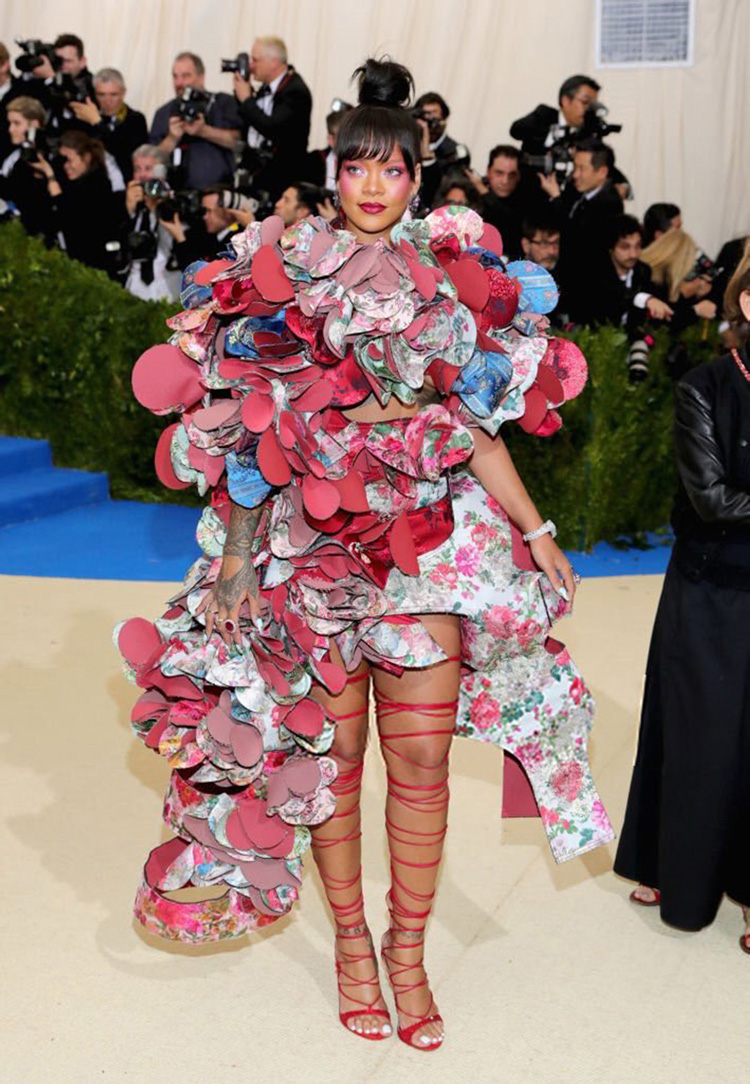 THE MET GALA BY NUMBERS

Each year the Met Gala brings together the most famous faces from the realms of film and fashion, all dressed in their own interpretations of the theme du jour. But what is the price of a ticket to attend the prestigious affair? Which famous faces does Anna Wintour enlist to host alongside her? And just how many crystals were needed to make Kendall Jenner’s barely there gown? Here’s everything you need to know.

The number of co-chairs for 2018 to host alongside Wintour. Amal Clooney, Rihanna, and Donatella Versace, who is a sponsor. Wintour has previously enlisted the likes of Katy Perry, Beyoncé, and Marc Jacobs to chair the event with her.

The number of Vatican vestments and accessories spanning 15 papacies, which will be featured in the exhibition. These items have never left the Vatican’s possession before, and will go on display alongside pieces by Coco Chanel, John Galliano, Cristóbal Balenciaga, and Donatella Versace.

Kendall Jenner’s La Perla naked dress, which was worn to last year’s gala, was made of 85,000 crystals strung together by one single thread.

The year that the first Met Ball, then called the Costume Institute Gala, took place, meaning that this year will be its 70th anniversary. Founded by publicist Eleanor Lambert, the benefit was dubbed ‘The Party of the Year’ as the great and the good of fashion and Hollywood came together to raise money for the institute. Pat Buckley, wife of the conservative author and commentator William F. Buckley Jr., became chairwoman in 1979, and Anna Wintour took over in 1995.

The reported cost in dollars of a ticket to the fashion soiree, with tables usually snapped up by designers and brands to host their favourite faces going for around $275,000. However, money doesn’t guarantee you an invitation, as Anna Wintour gets final say over the guest list.

The total number of flowers that went into the lavish decoration of 2016’s Gala, many of which had been flown 2,500 miles from Colombia.

The number of films that have documented the months of preparation that go into the Gala and the spring exhibition that it opens. The First Monday In May aired last year, with filmmaker Andrew Rossi following Wintour and the team as they planned 2015’s China: Through the Looking Glass event.

The square feet of gallery space which displayed the 2017 exhibition, which took 69 days to construct and install.

The number of months that the ‘Heavenly Bodies: Fashion and the Catholic Imagination’ exhibition will be on display, from May 10th to October 8th, 2018.

THE MOST UNFORGETTABLE MET GALA DRESSES OF ALL TIME

Thanks to its annual theme, based around the year’s exhibition, the fashion that graces its red carpet is often some of the most theatrical, with many attendees tailoring their ensembles to complement the topic of choice. The result is style that often pushes the boundaries, and here we revisit some of the Met Gala’s most memorable fashion moments. 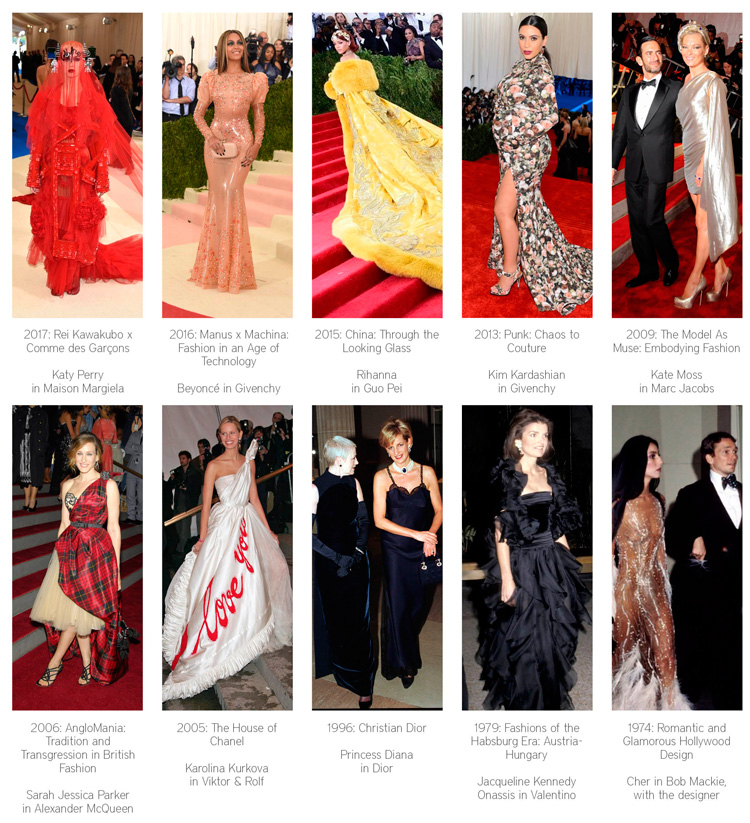