a&e talks to Brad Pitt about honesty, vulnerability and what it takes to achieve success. 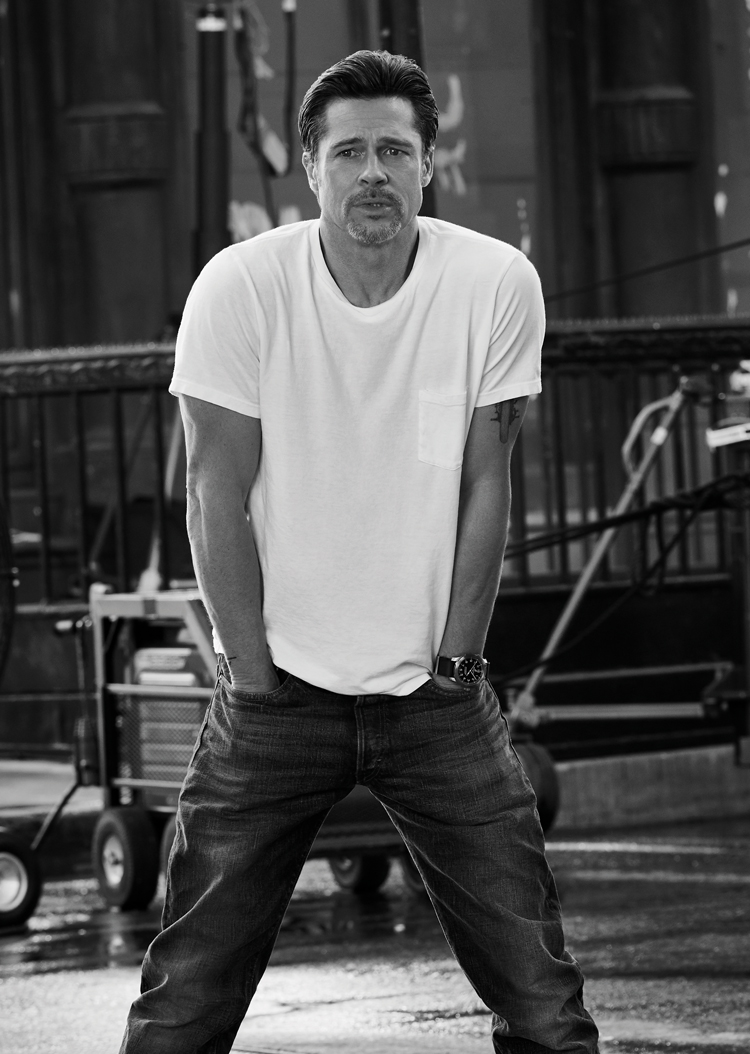 Brad Pitt needs no introduction, but we will give him one anyway. He is one of the most recognised men on the planet and is a hugely successful actor, film producer father of six and humanitarian. Pitt is Hollywood’s heartthrob and one of the most famous actors in the world.

Known for being the leading man, Pitt has received countless awards throughout his thirty-year acting career as well as Academy Awards for Best Picture as a producer for “Moonlight”, “The Departed” and “12 Years a Slave” which were produced under his own company Plan B Entertainment. Plan B has made films including “World War Z”, “The Big Short”, “Eat, Pray, Love” and dozens more. The company is owned by Pitt and his friends Dede Gardner who is President, and co-president Jeremy Kleiner. 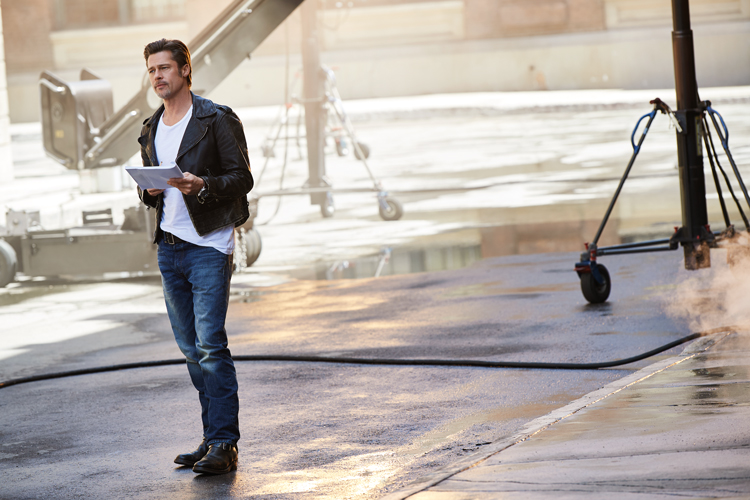 His first noticeable recognition as an actor was in 1991 when he starred as a cowboy hitchhiker in the movie “Thelma and Louise” and he then went on to become one of Hollywood’s most sought after actors. Pitt’s countless movie credentials include “Fight Club”, the “Ocean’s” series, “Troy”, “Mr & Mrs Smith”, “The Curious Case of Benjamin Button”, the list goes on…

His most recent project is the filming of “Once Upon a Time in Hollywood”, a movie in which he will star alongside Leonardo DiCaprio and Margot Robbie. Directed by Quentin Tarantino, the film is set in 1969 in Los Angeles, around the Charles Manson murders and will debut in cinemas in 2019. 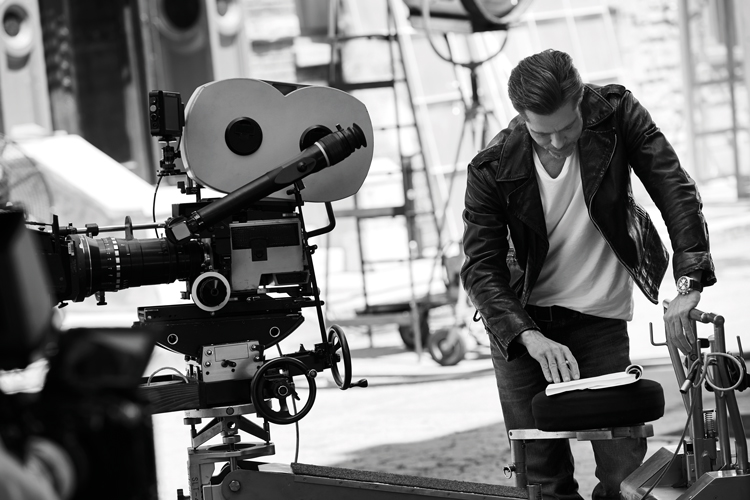 Pitt has been described as one of the most generous stars and he has donated millions to charitable causes. He supports the ONE Campaign, an organisation aimed at combating AIDS and poverty in the developing world and he is one of the founders of Not on Our Watch an organisation that focuses global attention on stopping “mass atrocities”.

In 2006, he founded the Make It Right Foundation, organising housing professionals in New Orleans to finance and construct 150 sustainable, affordable new houses in New Orleans’s Ninth Ward following the devastation caused by Hurricane Katrina. He also founded the Jolie-Pitt Foundation, with his then wife Angelina Jolie. The charity was created to aid humanitarian causes around the world.

Despite being one of the most recognisable men in the in the world, Pitt is surprisingly humble and incredibly charming. A&E was lucky enough to meet the man himself on a recent visit to China. He was there as part of a celebration of Breitling’s entry into market. Taking a break from being the leading man, Pitt was named as one of the four members of Breitling’s Cinema Squad earlier this year. He stars alongside Charlize Theron, Daniel Wu and Adam Driver in the latest campaign, shot by Peter Lindbergh. A&E sat down for an exclusive chat with the actor discussing why he was so drawn to Breitling as a brand and what it is he believes it takes to be a successful man. 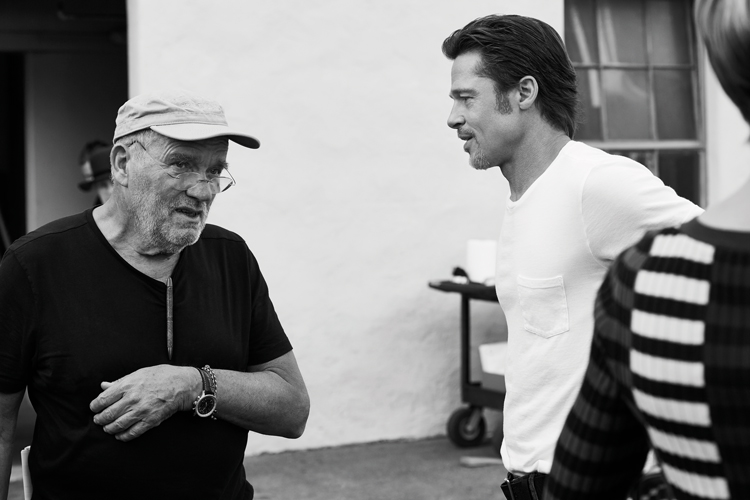 What are the common codes that you see between you and a brand like Breitling?

Quality is very important to me. Precision – which I’m always striving for. Elegance that I also strive for, and purpose. I think these are the things that I’m certainly drawn to and that speak to me. The brand is undergoing a transformation while also incorporating its history into the designs and I’m enjoying being part of it.

“THERE’S CREATIVE SUCCESS AND THERE’S PERSONAL SUCCESS THAT I HOLD IN MORE ESTEEM. THE BEST WORDS ARE INTEGRITY AND HONESTY AND TO BE TRUE TO ONESELF. I’M MORE DRAWN TO SINCERITY THAN I AM TO MACHOISM”. – Brad Pitt

Why did you decide to be part of the Breitling Cinema Squad?

To be a part of The Breitling Squad is exciting. Breitling has been around for over a century and is now rebranding itself, looking towards the future and redefining itself. It’s an exciting thing to be a part of it. The brand is a living example of incredible longevity. Of course working with Peter [Lindbergh] is great, we first met twenty years ago.

What is it that you love about watches?

I really like watches. They are the only option a man has to express himself with an accessory. And watches aren’t just for decoration – I also love their precision, their purpose.

How important is a mechanical watch and what does it mean to you?

Despite the fact that I look at my smartphone a lot for practical reasons, I wear a watch almost every day. It is a statement of masculine taste, and with its mechanical movement and rich history – an expression of real elegance. 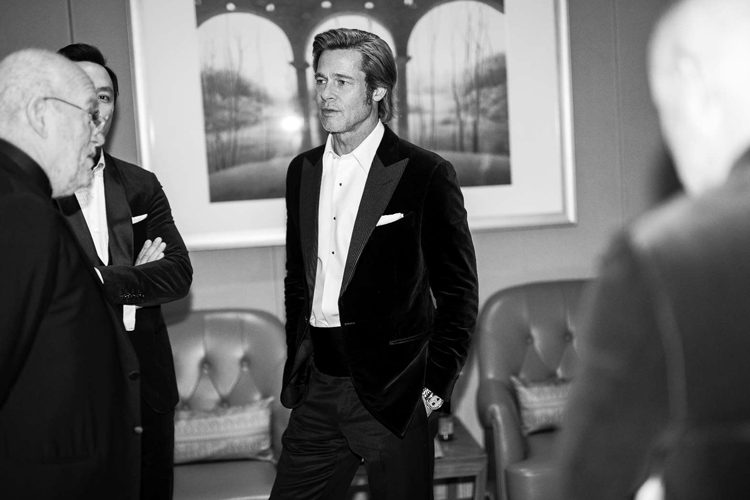 What attracts you to buy a watch?

The most important things for me are the aesthetics and what it feels like to wear. Not every watch feels the same on your arm. Finely-made watches just like these [gestures to the Premier B01 Chronograph on his wrist] have a certain gravitas, a weight… That’s something that I like to feel on my wrist.

When did you first own a Breitling watch?

I got into them first actually when I was travelling and I bought an Emergency watch. It’s not like I would every really be in danger but the idea was exciting. So I think I first invested then. And also being that the history of Breitling links to aviation, I got my pilot’s licence about twelve years ago so that took me to Breitling for the Pilot watch.

What qualities do you think a successful man must have?

Of course there’s creative success and there’s personal success that I hold in more esteem. The best words are integrity and honesty and to be true to oneself. I’m more drawn to sincerity than I am to machoism. I think vulnerability in a male is actually very strong. I think that the only responsibility I have is towards myself, my family, the people I love and the people I work with. I want to be authentic and honest. 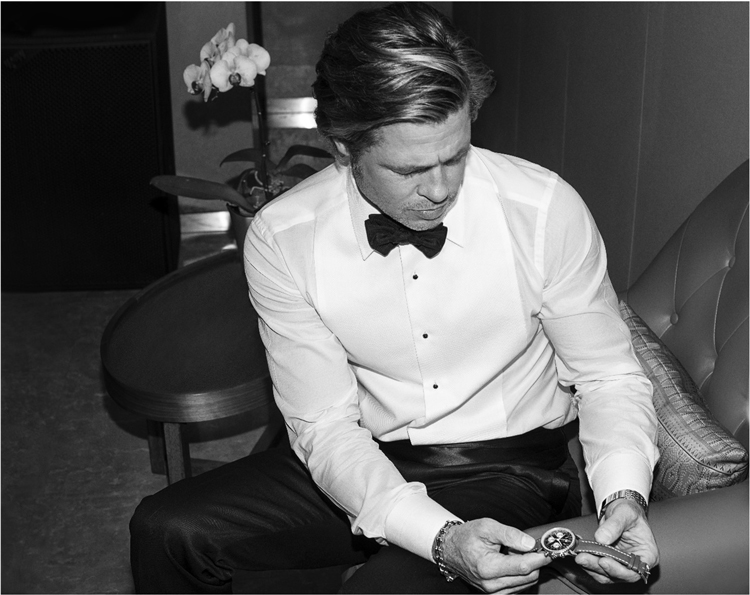 Brand Pitt at the Breitling summit in Beijing. Image by Sever Zolak.

Since you’ve started producing movies, you have gained three Oscar nominations. Are you doing something differently to the others?

Two friends and I started Plan B as a little garage band. Small movies were being made and big tent pole movies were being made, and in between, there were a lot of talented directors, writers and storytellers that were having a difficult time. We wanted to encourage and promote these people that we believed in. That’s how we got started.

What we found ourselves really being drawn to was “complicated” material. I call it “complicated” to describe the degree of difficulty to get the story made to completion. Projects like these need so much more support to go from idea to film. In a way, we still have the same enthusiasm of a garage band. I always think: “If we find this idea interesting, then other people will too.” The question is how many people? But that isn’t my game. I’m just interested in the stories. It’s a quest for quality storytelling. Being a producer became much more fruitful and is much more fun than I ever imagined. 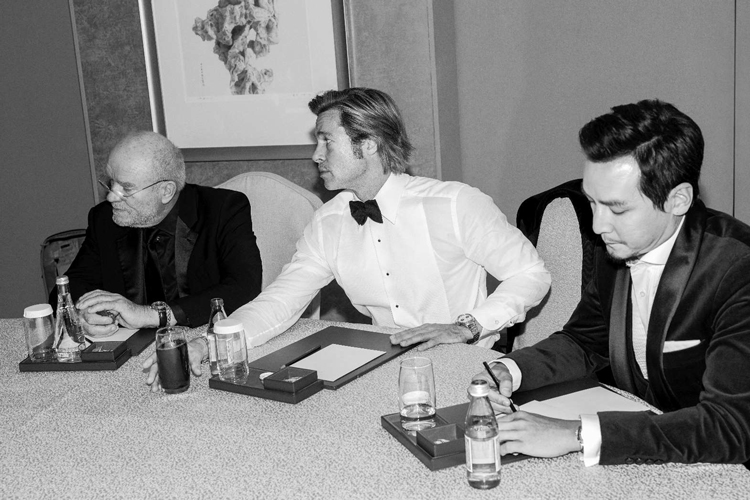 Many of your films deal with challenging issues and stories…

Firstly we wanted to support friends who were having a tough time in the industry – talented directors and writers. We wanted to encourage and promote the people that we believed in. We then realised that we wanted to take on projects that dealt with more difficult subjects. But there’s something else that’s more important to me: We all have things in our lives that inspire us. If we all just cared a little bit more about the people around us, then the world would be a much better place. We need to start taking care of each other more.

What about your approach to acting roles, what can you share with us about that?

Usually, I take on a role, I study the lines, I live and breathe the different characters, and I can be very focused on it for three or even six months. When it’s done, when the clap falls for the last time, everything starts to blur and I concentrate on something new, to make room for the next project. 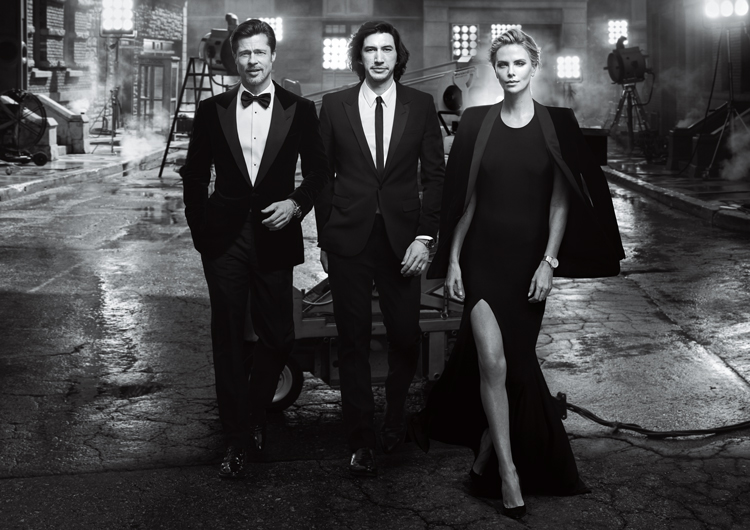 What can you tell us about your relationship with Quentin Tarantino?

My relationship with Quentin Tarantino started when we both were emerging around the same time, in the early Nineties. I worked on “True Romance” that was based on one of his “spec scripts” and then, “Inglorious Basterds”. He has an original voice, when you say “a Tarantino movie” everybody knows what it means. It’s part of the vernacular.

You also have an interest in architecture?

Somebody said that architecture is my real passion… Actually, I consider myself only a tourist in the architecture space. To me it’s not just architecture, but the art, the creativity. A building is a sculpture. It says a lot about how we live today, how we interact with others. Its function defines how we live our day. Buildings in Beijing like CCTV house and Bird’s Nest attract me a lot.