Why Finland Should Be on Your Travel Bucket List This Summer

When I was invited to visit Lapland in the summer months last  my initial thought was ‘what on Earth will I do in Lapland at that time of year?’ To me, the northern area of Scandinavia was somewhere to visit in the winter – it is the home of Santa’s toy factory, a place for husky sledging in the snow and ice fishing on lakes. 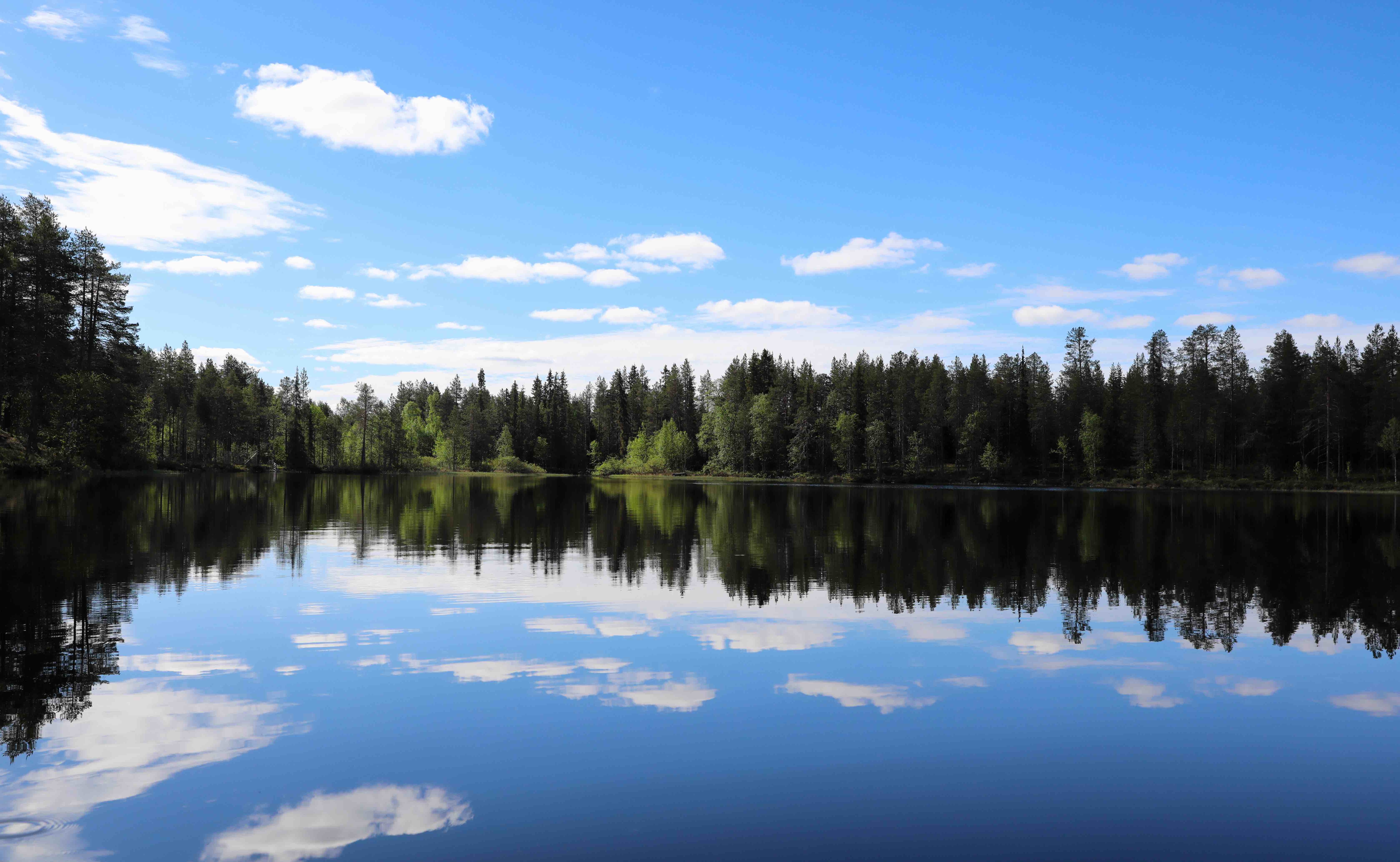 How wrong I was. Don’t be mistaken, Lapland is all of those things in the winter months, but in the warmer months it is something very different and I was about to discover the beauty of this unique destination and learn a whole lot about myself as well. 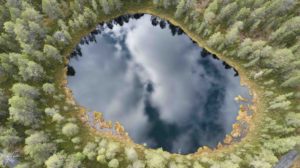 The area known as Lapland is present across the northern part of four countries – Norway, Sweden, Finland and the west side of Russia. I was visiting the Finnish-owned territory which offers a one-of-a-kind experience and the chance to discover breath-taking landscapes, try new activities and meet the incredibly humble local people. Thanks to a new flight route with Fly Dubai it’s now easy to travel to Finland’s capital Helsinki. Make sure you have time to stop off for a night or two in this European city as it’s well worth a visit. In the summer there’s plenty to do including boat trips, shopping, and discovering historic landmarks. The sun sets around midnight so you’ll have plenty of time to explore and get your dose of vitamin D! 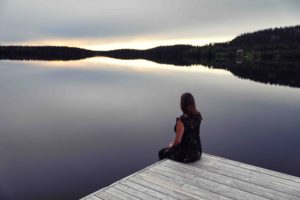 From Helsinki, it’s an hour and forty minutes flight to Kuusamo in Lapland. This quaint town is so different from the city. Surrounded by nature I was completely out of my usual city environment. Little did I know I was about to embark on a once in a lifetime adventure and see some of the most beautiful natural sites in the world. 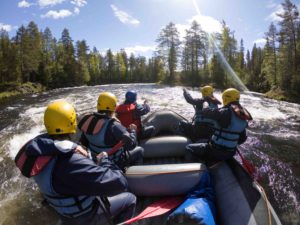 The first stop on our tour was the ski town of Ruka. In the winter months, Ruka attracts thousands of tourists to its ski slopes and resembles a bustling ski resort of the French Alps or northern Canada. It is one of the most popular and largest ski resorts in Finland with 2,000km of marked routes and there are countless activities to try. In the summer, however, it’s a different story. Most of the snow is gone although I was fascinated to discover a technique the local people have developed that actually enables them to store the snow by compacting it within the mountain ready for the following season. This means the slopes can open earlier every year, extending the ski season. 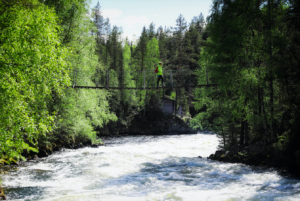 But back to summer. The snow has gone and replaced with blue skies and warm weather. Although it is a little unpredictable we saw temperatures of around 25 degrees centigrade while visiting. Make sure you pack your sunscreen and insect repellent as mosquitos are surprisingly common in the area. After arriving at the hotel we transferred to Oulanka National Park. This is one of the most popular National Parks in Finland. On route to the park I was amazed by the landscape and the lush greenery – there were thousands upon thousands of trees in every direction, broken up by pristine blue lakes. I later discovered there are around 188,000 lakes in Finland – more lakes than people in some of the lesser populated areas! Oulanka National Park is home to freshwater rivers and waterfalls.

There are hundreds of miles of walks and trails and in summer it is the perfect opportunity for picnics or relaxing afternoons in the sun. During a short hike, we were given the chance to take in the breath-taking views and experience the elevated rope bridge (yes it was as scary as it looks). We were then prepared an authentic Finnish dinner – a salmon soup cooked on a camp re with locally sourced ingredients, washed down with freshwater taken straight from the lake. That’s right, in Lapland the water in the lakes is so clean you can drink it, no filtering necessary! 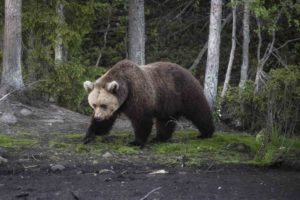 After dinner, we headed to another unique experience – bear watching. I had no idea what to expect but the bear watching programme was unlike anything I’d ever done before. The bears – most of which originated from Russia – are free to roam within nature while guests are invited into wooden huts to wait to get a glimpse of the rare species in their natural environment. Bear watching sessions can last between one and four hours – depending on the activity of the bears – and there is a 98 per cent success rate at seeing the bears. We weren’t so lucky – it took around four hours for us to see a bear – it was a long wait, but it was worth it. We saw a female bear and her two cubs. It was a true pinch-me moment. Afterwards, a late-night trip back to the hotel for a well-earned rest. 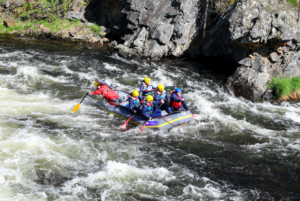 Day two started with an experience that I must admit I was a little anxious about – white water river rafting. As someone completely out of their comfort zone with this I had no idea what to expect. We were given lifejackets and waterproof outfits and were separated into groups on small boats. The white waters ow naturally in the region of Kuusamo and fast-falling rapids are commonly found in between lakes and rivers. We began with the level one rapids – the easiest – and we were guided by our skipper on how to paddle through them. Things were then amped up as we reached level two and three rapids. These were fast- owing with big drops and twists and turns. I have to admit I was nervous in the seconds leading up to the approach but it turned out to be one of the most exciting and satisfying adrenaline rushes I’ve had in my life. And the best part – we made it through alive and (almost) dry! When we reached the shore a well-needed lunch and warm tea was waiting.

The afternoon consisted of yet another first for me – fishing. In the wintertime when the lakes freeze over, fishing is done through the ice. A special tool is used to cut a hole in the frozen lake and a fishing rod is placed through the hole to catch fish – a very traditional technique. In the summer, however, the lake offers the perfect conditions for regular fishing. It was surprisingly fun and I even managed to catch a fish! 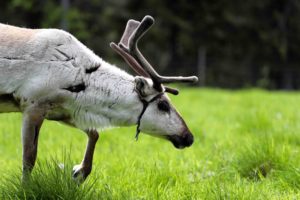 Our final stop in the Kuusamo area was a visit to a reindeer farm. Reindeer farming is one of the biggest industries in Finland and I was told many Finnish people judge each other’s wealth by how many reindeer they own! Of course in winter the reindeer are working hard to keep tourists entertained by pulling sledge but in summer breeding and farming the reindeer is a part of many Finnish people’s lives. During the warmer months, visitors can work alongside the farmers discovering more about the trade and the reindeer themselves. 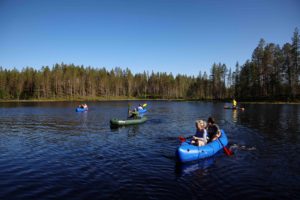 The next stop on our tour was Posio. This idyllic town is home to some of Finland’s most iconic landscapes and is also one of the most artistic towns in the city thanks to its history in traditional ceramics. We soon arrived at our destination Naali Lodge, which is owned by a Parisian couple who recently emigrated to Finland. Naali Lodge is a small but quaint property with unbelievable scenery. In summer you can try water sports on the lake including canoeing, paddle boarding and pack rafting (some more firsts for me). 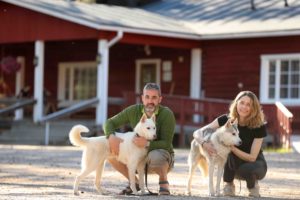 The property is also home to fine dining restaurant Tapio, owned by a British expat and his Finnish wife. Tapio is not what you would expect to find in rural Finland. The fine dining experience is creative and experimental. Using local ingredients the internationally trained chef puts his own unique twist onto traditional dishes. It’s an absolute must-try if you are in the area.

Another incredible experience was the Sauna Boat. Saunas are a way of life for the Finnish people who have one in every household. The sauna is known to be the most treasured part of the house for Finnish people – of course, they are a place to relax and unwind but some of the most important family meetings take place in the Sauna. You’ll find them in hotel rooms, gyms, spas and in the city, there are many public saunas. Not only is it relaxing, but it’s also great for the skin and energy levels. There are several sauna options in and around Posio but none as exciting as the new Sauna Boat. 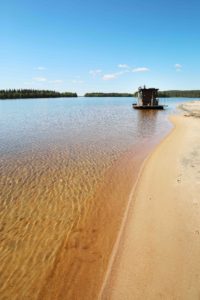 This unusual concept is based at one of Finland’s many lakes but this one also features a natural beach. The floating sauna means you can warm up inside and cool down by diving straight into the lake. I was so scared to try this – but I was told we were lucky as the lake temperatures were around 12 degrees when I visited but they can get well below freezing in the winter months. So, as my new adventurous self, I decided to go for it. After warming up in the sauna for around 20 minutes I felt more than ready to go for a swim and I experienced something quite unusual. The heat from the sauna stopped my body from feeling cold when I hit the water and it was an incredible experience that I will never forget. Before I knew it I was sunbathing on the beach in the cool summer temperatures. 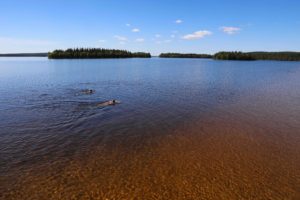 After trying out so many new experiences and activities I was really starting to feel more motivated and energised – I’m sure all that fresh air must have had something to do with it! On the final day of the trip, we were lucky enough to meet some of the local huskies. As a huge dog fan, this was one of my most highly anticipated activities. Huskies are one of the most popular dogs in Finland due to their ability to adapt to the cold weather and the ways in which they can work, pulling a sledge through the snow. In the winter the huskies are trained and given some time off and we were lucky enough to visit one of the farms and walk with the huskies. As someone who’s not usually very outdoorsy, this was yet another new experience for me and an opportunity to discover the incredible views of the Riisitunturi National Park. The stunning 77 square-mile National Park features lakes, mountains and views as far as the eye can see. 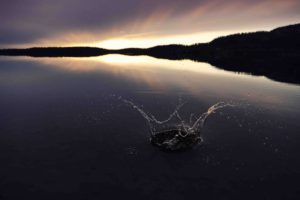 After a long walk with my new furry friends, it was time to head back to Dubai. On the journey home I reflected on all the amazing experiences and the incredible hospitality of the Finnish people and their positive approach to life – something I hope stays with me. Two flights later and I’m back dreaming of my next trip, next time however I think I will go for the snow! 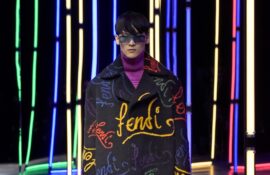