As the Nudo collection by Pomellato celebrates its 20th anniversary we take a look back at its story. 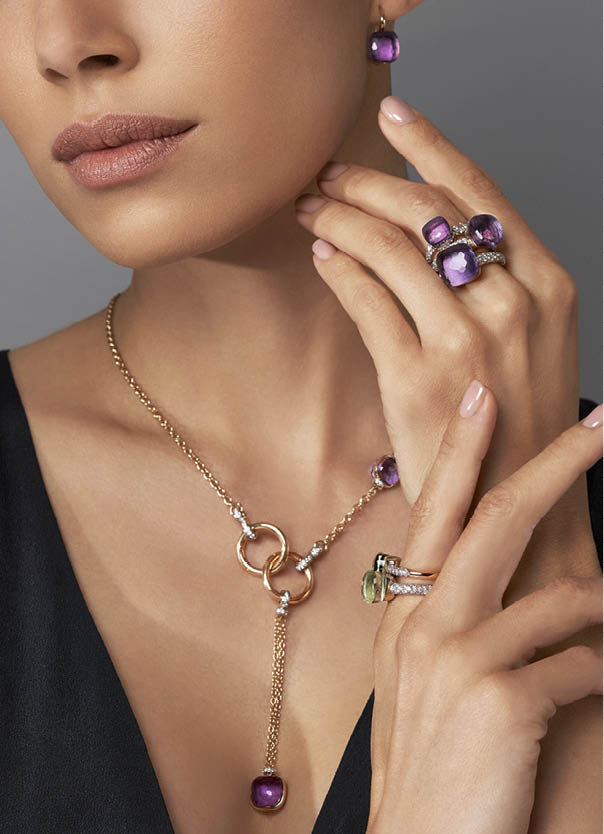 This year Pomellato celebrates 20 years of its Nudo ring. A design that revolutionised the world of jewellery with its modern approach. Born in 2001, Nudo, meaning nude or bare in Italian, was created with the mission to stand out as a ring reduced to its essence in an enticing rainbow of bright colours that spark joy and happiness and offer an alternative to the traditional diamond engagement ring that works for today’s modern and experimental woman. 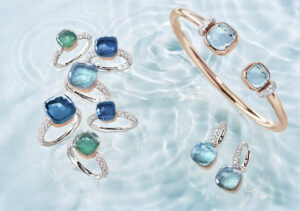 Since its first creation 20 years ago Nudo has become a signature design for the Italian jeweller, being reimagined in new shapes and colours each year. Its minimalistic silhouette makes it easy to wear for any occasion and the ability to stack the rings means they can reflect the wearer’s personality and individual tastes. 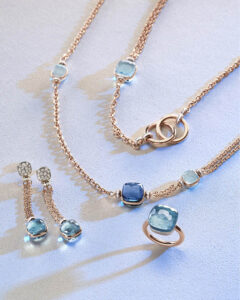 The first Nudo rings in 2001 featured the hues of garnet, peridot, iolite and red tourmaline. The unique colour combination was an instant success with the collections selling out almost immediately. The design offered an intense and pure solitaire of colour that appeared to float in the air thanks to a special fixing system concealed inside the collet at the base of each stone. This minimalist approach was a breath of fresh air to women looking for something unusual and unique. 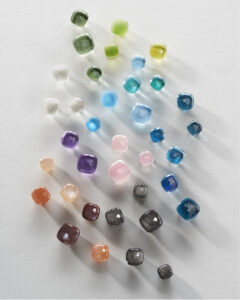 Breaking convention in every way, the solitaire of the Nudo rings was square and the top of the stone had a distinctive asymmetrical, soft faceting. This unique cut is an adaptation of a cabochon shape onto which skilled gem-cutters hand-cut 57 irregular facets into its surface. What’s more, to perfectly execute the clean lines of the Nudo, it takes the craftsmen and women at Pomellato’s Milan atelier four days to make by hand a Classic size Nudo ring. Pomellato now has international copyright on both the design and the cut of this unique piece. 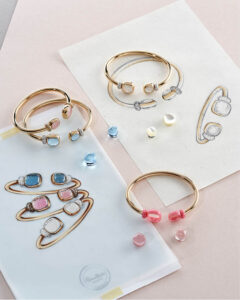 Since its first design, there have been over 35 different gems within the Nudo collection and the offering has continued to evolve into other designs. Unusual gems that have adorned the collections over the years include the prasiolite, pink quartz and sky blue topaz as well as aquamarine, amethyst and tourmaline. The gemmological team has explored special effects such as gemstone doublets and triplets and finishes like the new frosty Nudo Gelé in order to offer unique colours and tones. 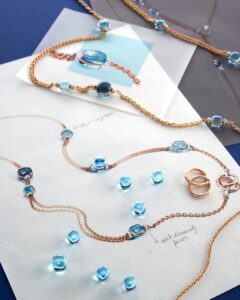 To mark the occasion, CEO of Pomellato Sabina Belli says:

“Nudo epitomises the revolutionary approach of Pomellato, born to create prêt-à-porter jewels for the emancipated woman. Nudo is quintessentially feminine, strikingly original and the perfect yet ironic answer to the solitaire ring as well as being inclusive in the array of naked gems it uses. Nudo is a true icon, powerful in the minimalism of its design yet multifaceted and honest, just like the Pomellato women.” 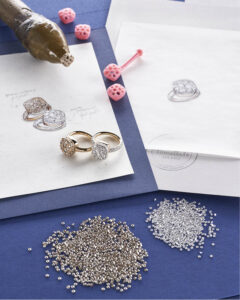 The Nudo collection evolved in 2016 when the first Nudo pendant arrived, followed by a bracelet in 2018 and a sautoir in 2019. Today, the Nudo rings come in four sizes and the entire range has grown to 150 items, allowing women to express themselves in any way they wish. In 2020 Nudo entered the world of high jewellery with the incredible La Gioia collection. This collection was a pivotal moment for the house, taking the Nudo collection into new realms.

Vincenzo Castaldo, Creative Director of Pomellato says; “There are so many of our passions, desires and intuitions in the Nudo, and it is such an important actor on the Pomellato stage, so extraordinary with its presence and strength, that Nudo is the very essence of Pomellato.”

The Nudo collection continues to break the rules, inspire and give freedom to women, allowing them to use their jewellery as a form of expression.