Beyond The Sea: Meet the UAE’s First Female Ship Captain

Captain Sahar Al Rasti the UAE’s first female ship captain discusses her passion for the sea and her drive as a businesswoman. 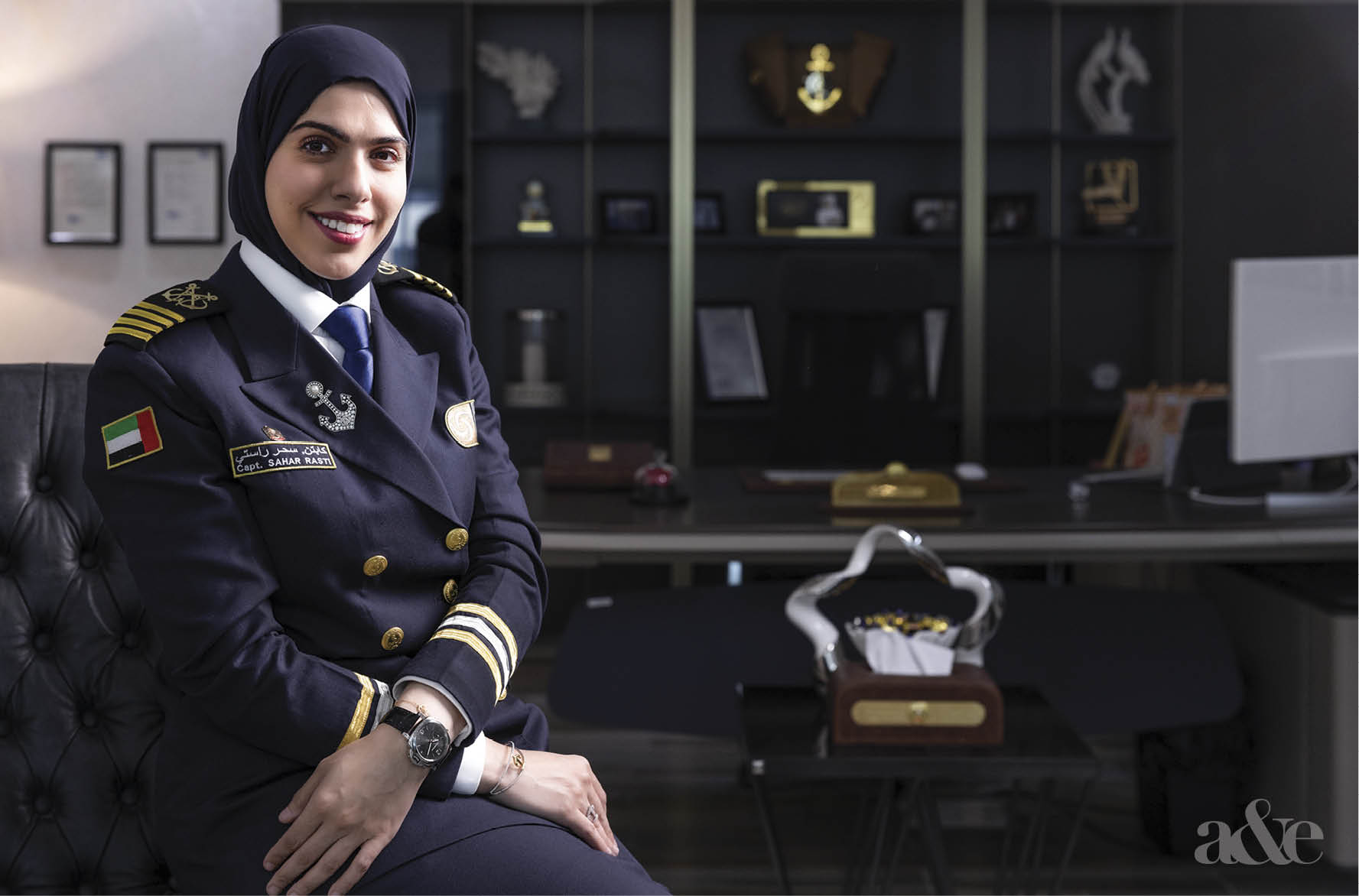 Captain Sahar Al Rasti was the first Emirati woman to work in the Abu Dhabi Maritime Services Company (Sven), a subsidiary of Abu Dhabi Ports. After working as an assistant in the administration department before realising her true calling of becoming a ship captain. At the time there were no women working in the department and for an Emirati woman to train as a captain was unheard of. But Sahar was determined to break that taboo and with a lot of determination she soon passed the qualification programme to captain ships under 24 metres, and within six months managed to sail for more than 1,300 hours. She also went on to become the first Emirati woman who passed the International Law Course on Maritime Aid and Maneuvers Level I and II in the Middle East.

Today Sahar doesn’t spend so much time at sea but instead runs her own company SJR Group. With five subsidiaries covering many Maritime sectors as well as venturing into other areas of business, Sahar is a busy woman. A mother of three she still tries to find time to spend with her family and hoped they will one day take over the business. Here we find out more about the journey to where she is now and the goals she still sets herself.

Tell us a little about yourself and how your choice of career has shaped you as a person?

In 2015 I joined Abu Dhabi Ports as an administration assistant, I then progressed to work as a coordinator and one day I passed through the navigation services department, and I noticed there were no females working in this field. So, I went to familiarise myself with what this department does, and I realised I was very interested in it. I met my future manager and told him I wanted to join the department. At first, he told me I could not as I was a woman. He said it’s tough and as a woman, I wouldn’t like it. But at that moment I took on the challenge and I was determined to make it. In 2016 I went to study in France at IALA, the International Association of Marine Aids to Navigation and Lighthouse Authorities. I was the first Middle Eastern woman to receive this certificate. Then in 2017, Abu Dhabi Ports were preparing to introduce an academy for captains and I joined them. Then in 2018, I graduated as the first female captain in this field.

What were some of the biggest challenges you faced along the way?

The biggest challenge was knowing how to deal with the men in the department. There was no motivation towards me from their side and they had the old mentality that a woman shouldn’t be there. On the ship there is no space, it’s hot, you are there for a long time and you start to feel dizzy. You must work so hard physically and mentally to get through it. And most importantly you need to be patient and clever on how to communicate with the men! 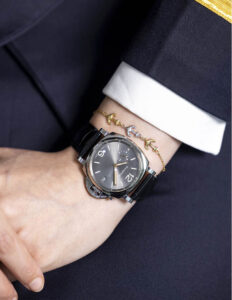 Do you think the acceptance of women in this field has changed since you graduated in 2018?

Not that much to be completely honest. We still have this problem but in the UAE the perception has changed because of Her Highness Sheikha Fatima bint Mubarak. She has been encouraging women to work to the point that now you can find women in every field.

How would you like to see the industry progress moving forward?

Two years ago, an American Academy for ship captains opened in the UAE and I won’t say that I was a role model to them, but this is what they keep telling me! They now have more than 25 ladies at the academy, and I think the UAE is starting to change when it comes to women in this field. But these women are still facing the same problems that I faced. 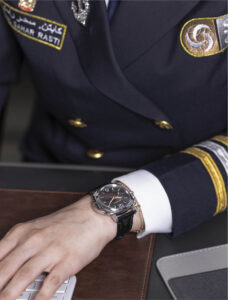 In an industry that is dominated by men, how do you ensure your voice is heard?

I’m a strong woman! I must be, and the men notice this. I have to be nice to them and let them know that I am learning from them and their experience. Sometimes it’s good to be nice!

What is a message you would send to other women considering a career in this industry?

They must be brave, confident, and strong.

Tell us about your company SJR Group and the vision you have for it?

SJR Group is the first company owned by an Emirati woman in the Maritime sector. We have five subsidiaries. The first is in trading and we are providing accessories for ships. The second is ship management where we are handling the operations and chartering boats. The third is IT and the fourth is in honey and saffron and the fifth is related to horse stables. 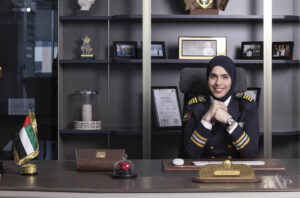 To be honest it’s not easy, especially as I’m a mother of three! But my kids are the ones who are supporting me and everything I do is for them. So, I try to manage everything. But it’s much easier now that they are older.

I’m teaching them how to run a business because in the end this will one day all be theirs, but I’m also guiding them to do whatever they want. One wants to be a diplomat; one wants to be a space scientist… so you never know what the future holds for them.

What does a working day look like to you?

I usually wake up at 5am to pray. Sometimes I go to the gym. I spend some time with the family before they head to school and then I head to the office or to meetings. The mornings are usually very busy with meetings. Then in the afternoon I spend time creating new ideas and thinking about what my company needs.

What do you love most about being at sea?

I love the sea. I love sitting and watching it. The sea is mysterious, and I think I am a mysterious woman. I don’t share everything. People think that I’m happy all the time, but they don’t know what I’m really like and what I’m really facing. Being at sea taught me a lot of patience.

What does time mean to you and how do you like to spend it?

Time is one of the most precious things in life. You have to use your time in the correct way as you will never get it back.

A lesson that I’ve learned is to be motivated and to have a good routine and stick with it.

This year the UAE celebrates 50 years – what does this occasion mean to you?

It makes me proud. I’m so proud to be an Emirati woman.

It would be a lot of thanks and to tell them that I’m going to try my best to make my country proud of me and proud of my family.

What would you still like to achieve that you haven’t done yet?

I would like to learn how to scuba dive and also go sky diving. I love to try new things. Also, I don’t know much about oil and gas, and this is something I would like to educate myself on and add to my business portfolio. 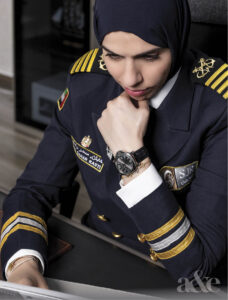 I learnt a lot from my father as well as from Her Highness Sheikha Fatima bint Mubarak and His Highness Sheikh Zayed bin Sultan Al Nahyan. But the person that inspires me the most is myself.

What would you say to women who look at you as a role model?

I would tell them I want them to be better than me!