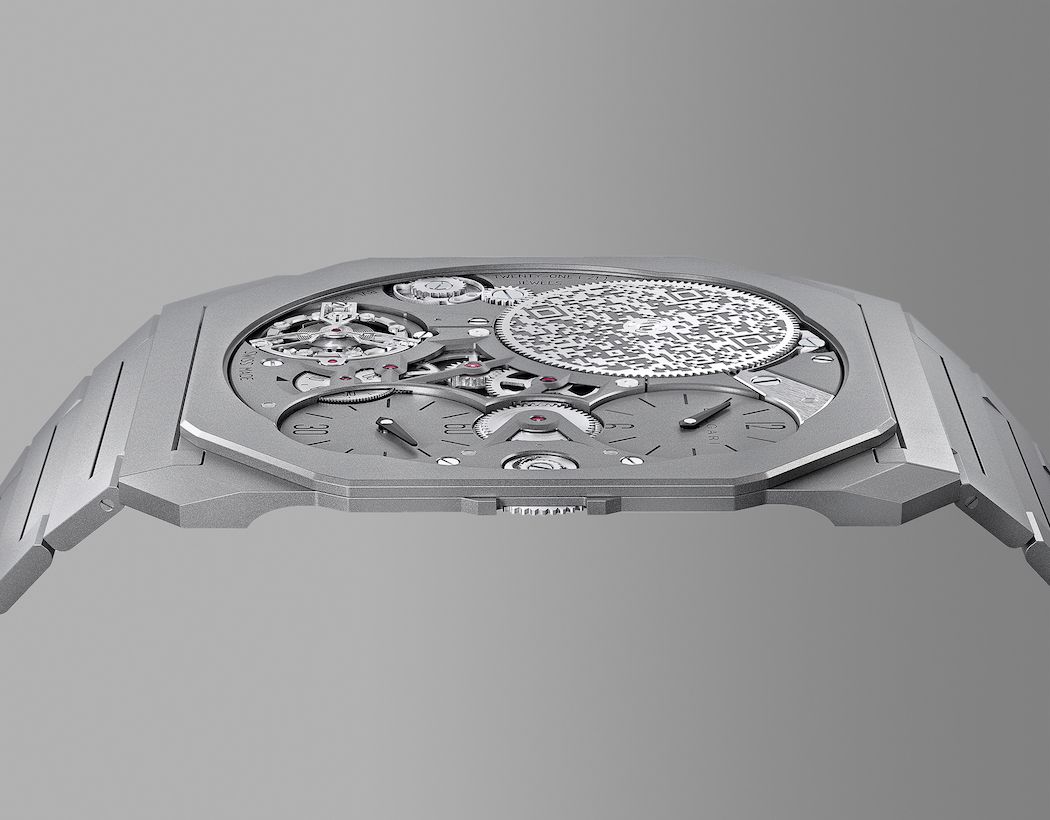 At just 1.80mm thick this remarkable timepiece is the World’s Thinnest Mechanical Watch, displaying the finest in innovation and the quintessence of Italian design.

Designed by Fabrizio Buonamassa Stigliani, Bulgari’s Creative Director of Watches, the Octo Finissimo Ultra was designed to pay tribute to the 10th anniversary of the Octo collection which has become one of the most extraordinary watchmaking stories over the past decade. With its unique shape and eight-time record-breaking design, the Octo watch is a unique piece of history. 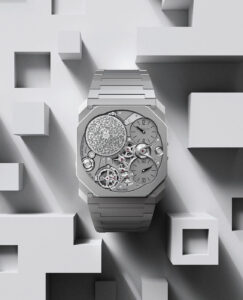 The timepiece challenges the laws of physics and plays on the perception of the visible and the invisible, as thin as a sheet of paper, while a three-dimensional design it’s flat appearance is almost as think as a two-dimensional drawing.

Three years of research and development saw Bulgari’s team reimagine everything they knew about watchmaking in order to bring this innovation to life. For the first time in history, the watch uses the caseback as a mainplate on which the 170 components of the BVL Calibre are integrated. 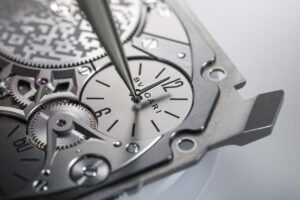 The new Octo Finissimo Ultra was unveiled in Rome at the iconic Piazza della Rotonda on March 21st 2022 with a spectacular event. The eight columns of the Pantheon represented the eight world records that this watch has achieved and the eight patents that have been filed throughout its ten years of design. 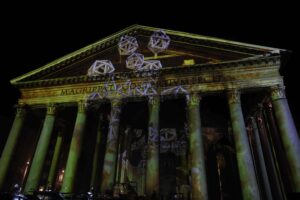 As the first time this location has been host to such an event Bulgari chose to honour this moment surrounded by the beauty of its home, the historical city of Rome. A feat made possible thanks to a collaboration with the Direzione Musei Statali Città di Roma, and the Museo del Pantheon, but also for the support received from Soprintendenza Speciale Archeologia, Sovrintendenza Capitolina ai Beni Culturali and Parco Archeologico del Colosseo.

Surrounded by VIP guests and friends of the Maison, Bulgari CEO Jean-Christophe Babin spoke of his pride of this moment “This fabulous landmark that we are setting today with the Octo Finissimo Ultra is in fact – for me and all the teams – the fulfilment of a dream. One which now guarantees that Bulgari will forever be acknowledged as having written some of the finest chapters in Swiss watchmaking. And the fact that the Maison is Italian makes us particularly proud“, he said. 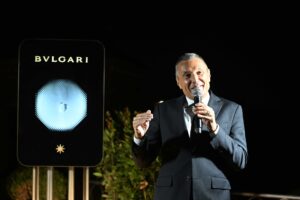 The event saw the worlds of art, science and technology intertwined as the surface of the Pantheon façade was virtually reimagined into the masterly stage-setting for a contemporary architectural production. A screening of “TEMPLE OF LIGHT_ULTRA AT PANTHEON” by OUCHHH, a real-time generative artwork curated by Reasoned Art, created a bridge between cultural heritage and innovation.

The temple of the gods of Ancient Rome was the scene of an iconic art installation that consisted of three moments, one of which was in Live real-time. The beginning and the end of the show saw thousands of data from the history of Italian architecture and art that, through artificial intelligence algorithms, have been reworked and projected on the pronaos of the Pantheon. 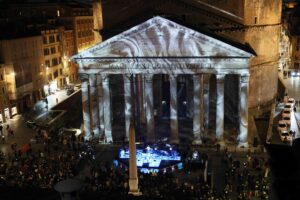 Artwork in the show was created using data extracted from the brain waves of the conductor monitored through an EEG Headset device. It resulted in a never-seen-before work that crossed the boundaries between man and machine.

Further combining technology and design, the first ten owners of the Octo Finissimo Ultra will receive an exclusive NFT artwork that guarantees the authenticity and uniqueness of the watch by means of blockchain technology. A QR code is engraved on the barrel of each watch to encompass a global and connected ecosystem and allows full transparency of the journey of this unique creation

An exhibition on the history of the octagon shape is currently on display in the historic Bulgari boutique on Via Dei Condotti, representing the eight facets of this iconic watch.