On-screen couple Kit Harington and Emilia Clarke from the popular TV series Game of Thrones have reunited for the Dolce and Gabbana fragrance ad.

Both are the new faces of The One for her and for him fragrance line. Clarke took us on stroll through buzzing street of an Italian town for The One Eau de Toilette that went live on September 1. Three days later, Harington took center stage for The One for Men, also went live on September 4. However, just like to many fans we were also disappointed for the two GoTactors never crossing paths in the same advert. 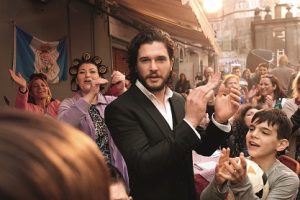 Kit Harington starring for The One for Men by Dolce & Gabbana

The British actors filmed a campaign mirroring one another with a cheery advert and dancing-filled spots in an open-air market on the streets of Naples. Harington plays a charismatic character caught in a festive atmosphere, as he shares some smiles and dance moves with Neapolitan families over a savory Italian dish.

As for Emilia Clarke, she gifts the new fragrance campaign with her irresistible natural, fresh beauty that envisions the true essence of The One perfume. Also, shot of the streets of Naples with real people living their day-to-day life.

The two new advertising campaigns for The One were directed by the Italian filmmaker Matteo Garrone. In keeping with the brand’s authenticity, the ad scenes combined a charming soundtrack “Tu vuò fa’ l’americano” (translates to “You want to be an American”)- an Italian hit written in Neapolitan in 1965; representing a joyous celebration of the genuineness and warmth of the Italian culture.

Join Emilia Clarke and Kit Harington’s on their Italian adventures in the new campaign videos for Dolce & Gabbana below.