Dior presented the Men’s Fall 2023 collection by Kim Jones in a stunning location beside the Ancient Pyramids of Giza Egypt.

The show offered spectacular and otherworldly scenes as celebrities and VIPS from around the world gathered to see Kim Jones’ latest offering.

Titled “Guided by the Stars”, Jones chose the iconic location because of its perfect sunset and incredible views as the light changes and the sky turns dark.

“My interest in ancient Egypt is about the stars and the sky. it’s that fascination with the ancient world and the parallels with what we look at today; what we inherited from them and what we are still learning from the past.” Said Jones in the show notes.

He continued: “It links to Christian Dior in that sense and by way of his fascination with symbols and superstitions that recur throughout his life and work, one of which is the star. in both the collection and the show there is an idea of ‘guided by the stars’ and what that can entail in many ways. it’s about how the past shapes the future or an idea of the future from the past.” 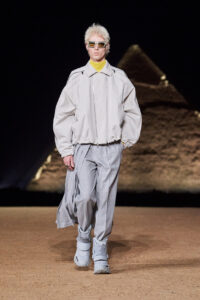 The collection was revealed as the sun set on the ancient monuments with models emerging as silhouettes on the horizon.

The collection reflects the colours of the desert and the sky with a palette ranging from light greys, to soft yellow to rich blue. As the night falls the stars reveal themselves and this can be reflected in Jones’ tribute to astrology. 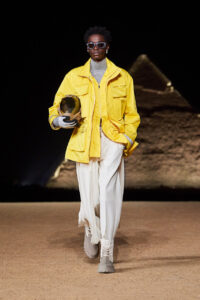 In tailoring, the collection brings together the masculine and feminine highlighting the way our universe is fully connected. It absorbs the lessons of the past and present as Jones successfully united couture finishings with technical practicalities in outerwear and he turns to archival embroideries to offer a modern take on armour. 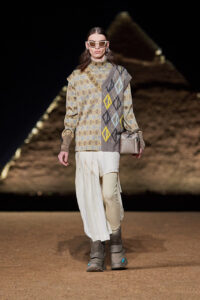 Clothes are layers are surprising textures are paired together in new ways. There is a sense of fluidity, combined with protection and warmth, again linking back to the references to Ancient Egyptian armour. 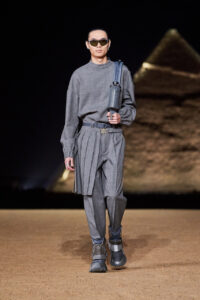 In accessories leather goods reinterpret luxury into a new, organic utility, and footwear flirts with futurism but of course with a touch of traditional savoir-faire and impressive technical know-how. 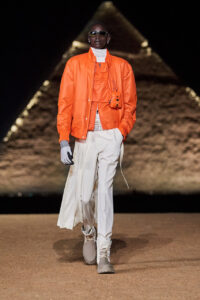 The star-studded show saw many friends of the house in attendance including Lewis Hamilton, Robert Pattinson, Suki Waterhouse, Naomi Campbell ad many more. The show was followed by a captivating performance by British composer Max Ritcher. 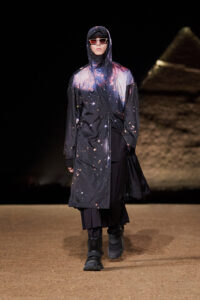 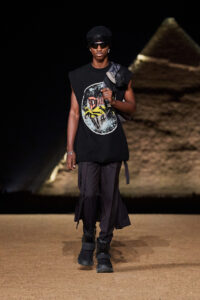 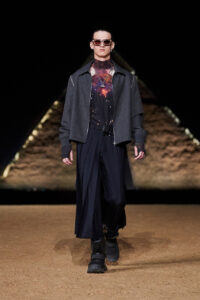 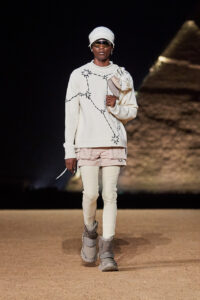 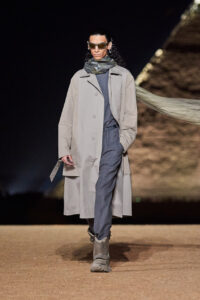 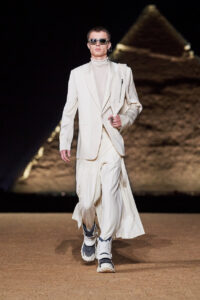 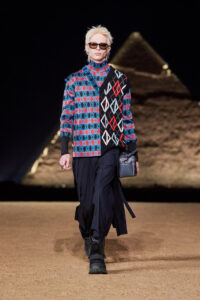 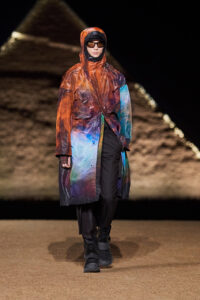