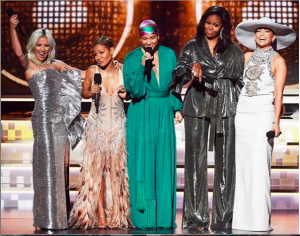 Michelle Obama made a surprise appearance at The 2019 Grammy Awards last night. The former first lady was there to support her friend Alicia Keys who was hosting the event. To the delight of the audience, Obama made a surprise appearance on stage alongside some Alicia Keys, Lady Gaga, Jennifer Lopez and Jada Pinkett Smith – all of who were there to discuss the important role music has had in their lives. The five appeared on stage holding hands in a moment of female solidarity. 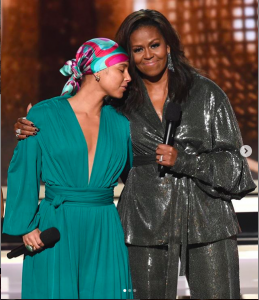 Each woman then went on to say how music has influenced their lives with Lady Gaga speaking of the struggles she faced as a young woman in the industry. She said; “they said I was weird, that my look, my choices, my sound, that it wouldn’t work. But my music told me not to listen to them. Music took my ears, took my hands, my voice and my soul.”

Obama, who took a break from her tour promoting her book Becoming to make an appearance at the event, spoke a couple of lines about her relationship with music. “From the Motown records I wore out on the South Side to the ‘who run the world’ songs that fuelled me through this last decade, music has always helped me tell my story, and I know that’s true for everybody here,” she said. 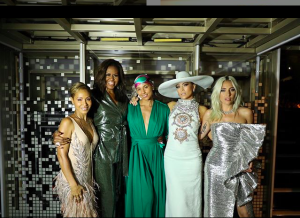 She followed up her appearance with a post on Twitter where she was standing backstage alongside the four power women. The post was accompanied with the caption. “A big part of friendship is showing up for your girls—that’s why I was thrilled to be there for the one and only @aliciakeys at the #GRAMMYs, [Keys] is one of the most genuine and thoughtful people I know—there’s no one better to help us all celebrate the unifying power of music!”