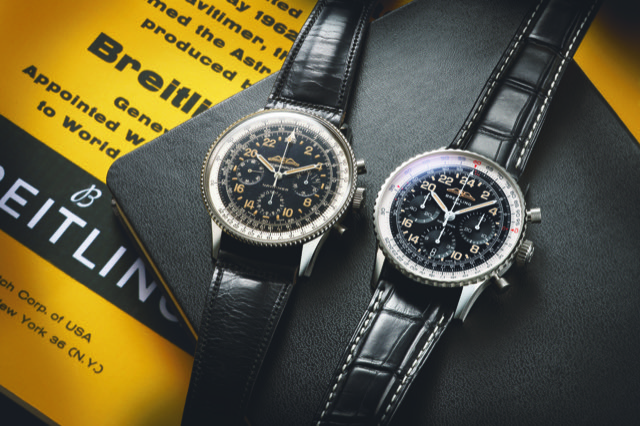 On May 24th, 1962 American astronaut Scott Carpenter made a historic mission to Space on board the Aurora 7 spacecraft. At that time the world’s attention was rapidly advancing beyond air travel and into space exploration, and this journey was a landmark moment in the development of travel into the universe. 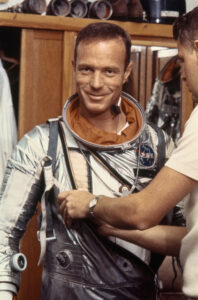 Scott Carpenter dons the Project Mercury suit he will wear on his MA-7 orbital flight. @GettyImages

Since the beginning Breitling had been the go-to watch manufacturer for pilots, who required a reliable instrument when in the skies. But as space travel advanced watchmakers were exploring new concepts and designs that could accompany astronauts on these new journeys. Breitling’s experience in aviation put the brand a step ahead, but it wasn’t until Scott Carpenter contacted Willy Breitling, asking for a custom-made watch that could accompany him on his mission. Unlike the regularly 12-hour watch, Carpenter requested a 24-hour watch, that would allow him to know what time of day it was when there was no regular day or night. 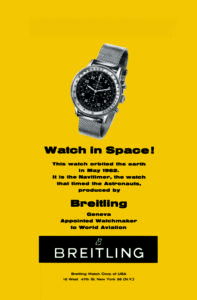 Navitimer Cosmonaute advertisement from ca. 1963 for the first Swiss wrist chronograph to travel in space in 1962

And so, Carpenter embarked on his journey with the Navitimer Cosmonaute on his wrist. A variation on the iconic aviator’s watch he’d encountered in his flight days, but with a 24-hour dial to tell day from night in space. This one-of-a-kind timepiece officially claimed the title “first Swiss wristwatch in space” as Carpenter orbited the Earth three times while wearing it during his Mercury-Atlas 7 mission. The watch landed back on earth with Carpenter and has been kept as a sacred piece by Breitling ever since.

That is until now…

On the 60th anniversary of this iconic moment, Breitling not only unveiled Carpenter’s original Navitimer Cosmonaute but also launched a modern tribute to it. This special release is limited to 362 pieces that recognise both the spacecraft’s circumnavigations of the Earth and the year the mission made history, marking a crucial step in manned spaceflight. 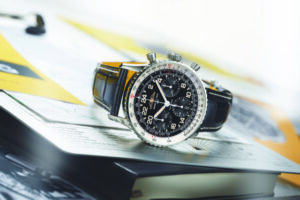 With a design based on the original, the new Cosmonaute features a timeless all-black dial and black alligator strap or a seven-row stainless-steel bracelet. It also comes packed with new features offering a modern upgrade of this iconic piece. A new platinum bezel offers a premium touch to the watch that makes this edition a special collector’s piece. While its open sapphire crystal caseback provides a window to the B02 movement with its special bridge engravings to mark the occasion: the words “Carpenter,” “Aurora 7,” and “3 orbits around the Earth,” along with the name of the original group of seven astronauts chosen for NASA’s first human-crewed spaceflights, Mercury 7.

Georges Kern, CEO of Breitling, said in a statement on the day of the launch; “When we introduced the redesigned Navitimer earlier this year, a question on everybody’s lips was, ‘What about the Cosmonaute?’ Today, I’m thrilled to finally announce two Cosmonaute reveals: the first-ever public viewing of the watch Scott Carpenter wore into space, and a 60th-anniversary limited-edition timepiece that pays tribute to its history-making forerunner.” 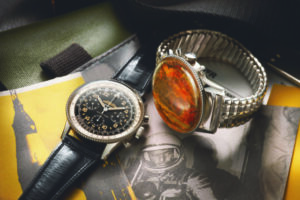 Today’s Cosmonaute takes us back to the origins of space travel, when the race was on, stakes were high, and every mission was a triumph of human ingenuity. This new watch honours the aesthetics of the original Cosmonaute, with subtle updates that work almost imperceptibly to give it its modern-retro appeal. As a final tribute, the caseback is engraved with the date of Carpenter’s mission, “ONE OF 362,” and the phrase “First Swiss wristwatch in space.”