Scent Of The Week: Chloé Nomade

The Chloé woman is known for her freedom and natural elegance. Flourishing in confidence, her inner strengths lead her to countless horizons where she embodies all the world’s possibilities.

Inspired by freedom and open spaces, the new Chloé Nomade is a fragrance made to define her every move and every place she travels to. A perfume that mirrors her image: a Nomad. 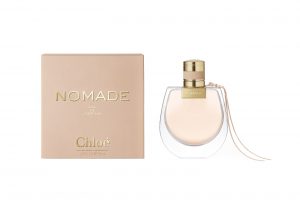 Created by perfumer Quentin Bisch, highlighted the natural ingredients by exhilarating harmonies—similarly to the feeling of escape. Welcoming a mix of softness, the face opening accords introduce a powerful floral chypre swift. Including intense notes of mixed mineral characters of the oak moss is masked in the sweetness of the mirabelle plum. Finally, from this freshness it ends with a flowery sensation carried by freesia.

French actress Ariane Labed is the face of this nomad woman, an adventurer with unlimited boundaries. The new campaign was photographed in Rajasthan by Ryan McGinley and filmed by Fleur Fortuné.

Guided by the freedom, her natural beauty s and nomadic identity sees the world in front of her eyes as she soaks up the sun.