Karl Lagerfeld’s final collection for the French fashion house took inspiration from a ski chalet, and the snow-adorned runway was just as picturesque. 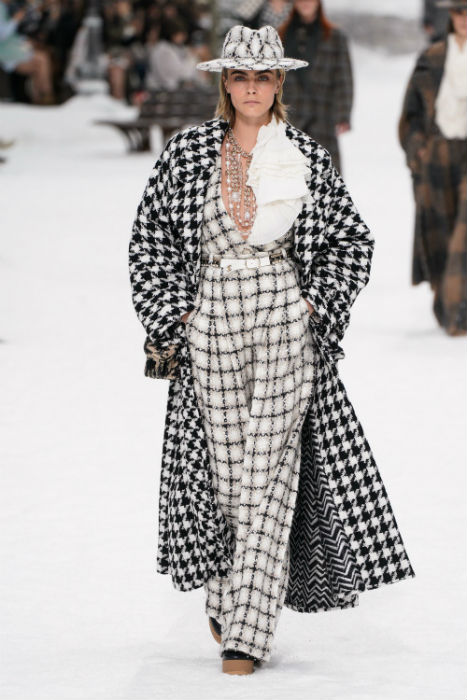 As Paris Fashion Week rolled around for 2019, there was one Ready-To-Wear collection that the entirety of the industry was eager to see.

Chanel’s AW19 collection would be the final one by the late Karl Lagerfeld, who sadly passed away in February of this year, aged 85. The iconic German fashion designer had worked for the luxury house since 1982, last serving as Creative Director. 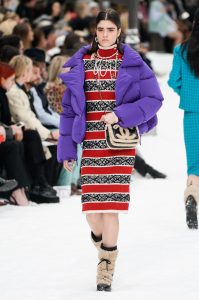 With models lined around the decking of the so-called Chalet Gardeni at the Le Grand Palais, the Autumn/Winter show started with a moment of silence before the models took to the snowy path to showcase their looks.

Thick knits of houndstooth in creamy-beige clashed with black and white check designs, and chunky monochrome knits gave an overly-cosy feel to the opening looks. Pearl jewellery and jewel embellishment brought a touch of glamour to the looks, however, and fedora knit hats and touch of formality.

Elsewhere, models dressed for the cold in bold puffer jackets in shades of deep purple and royal blue or capes draped from the neck and flowing behind them.

The show closed with a series of somewhat angelic outfits, epitomised with a feathery white gown.

But the clothes themselves were only one aspect of the show. As the likes of Penelope Cruz and Cara Delevingne walked the runways, muses of Lagerfeld from over the years such as Naomi Campbell, Kristen Stewart and Claudia Schiffer graced the front row. 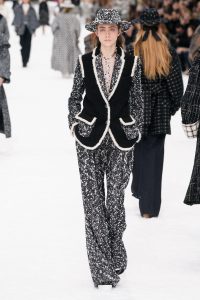 READ: Karl Lagerfeld’s Legacy: From Fendi to Chanel, Looking Back at the Iconic Designer’s Career