From Milan to Paris take a look at the menswear collections for Spring/Summer 2020 that are currently being showcased for SS20. 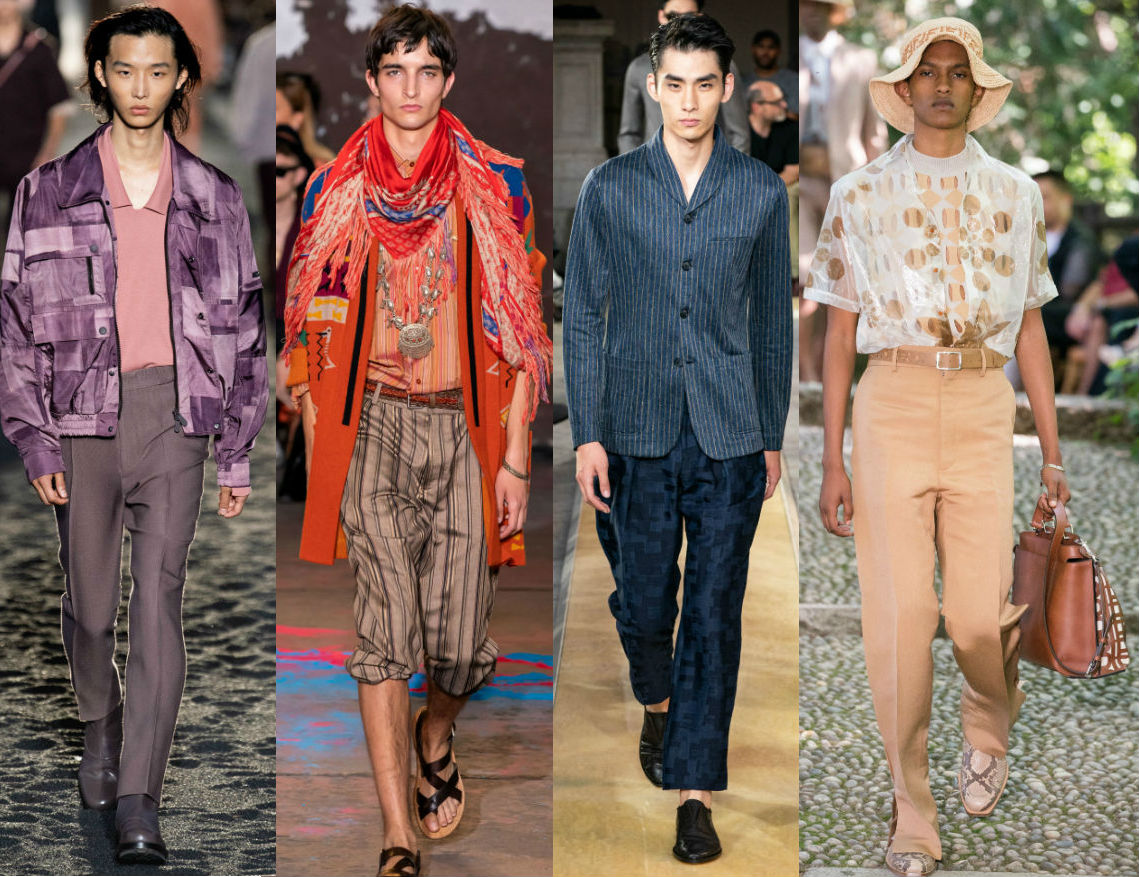 See the menswear collections for Spring/Summer 2020 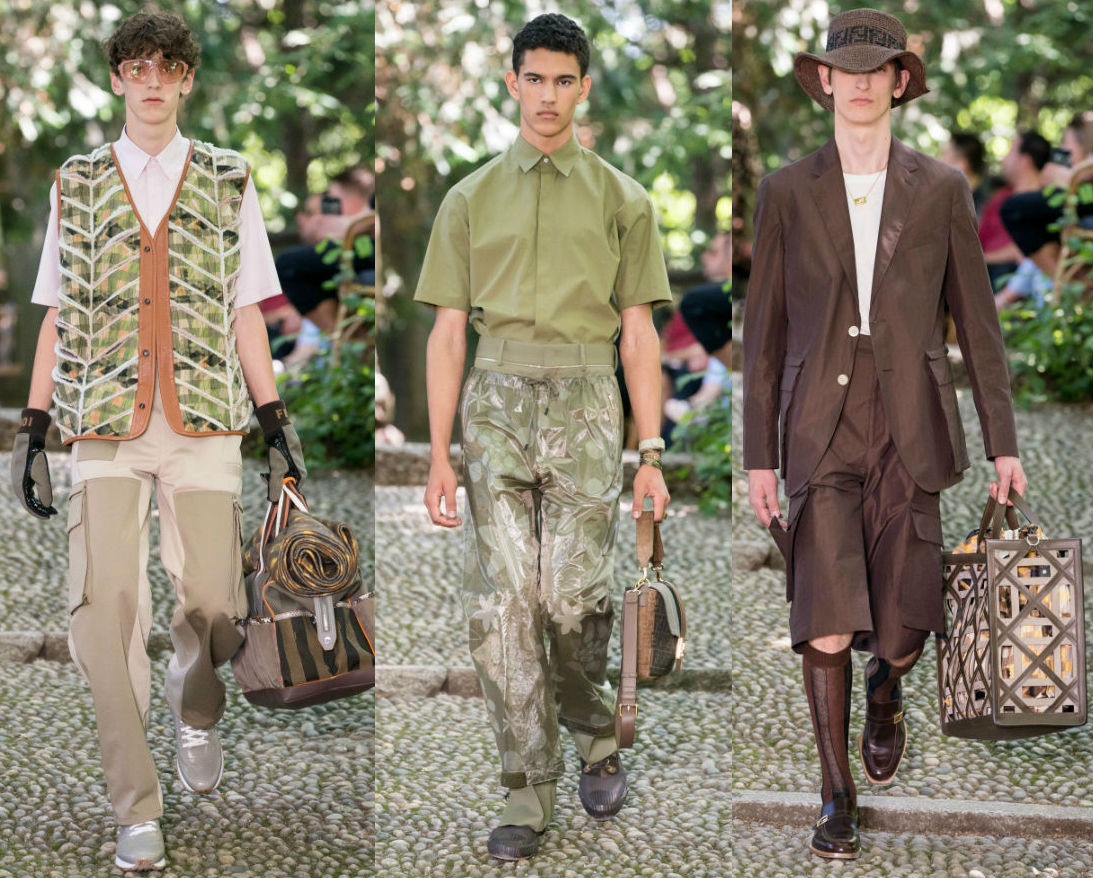 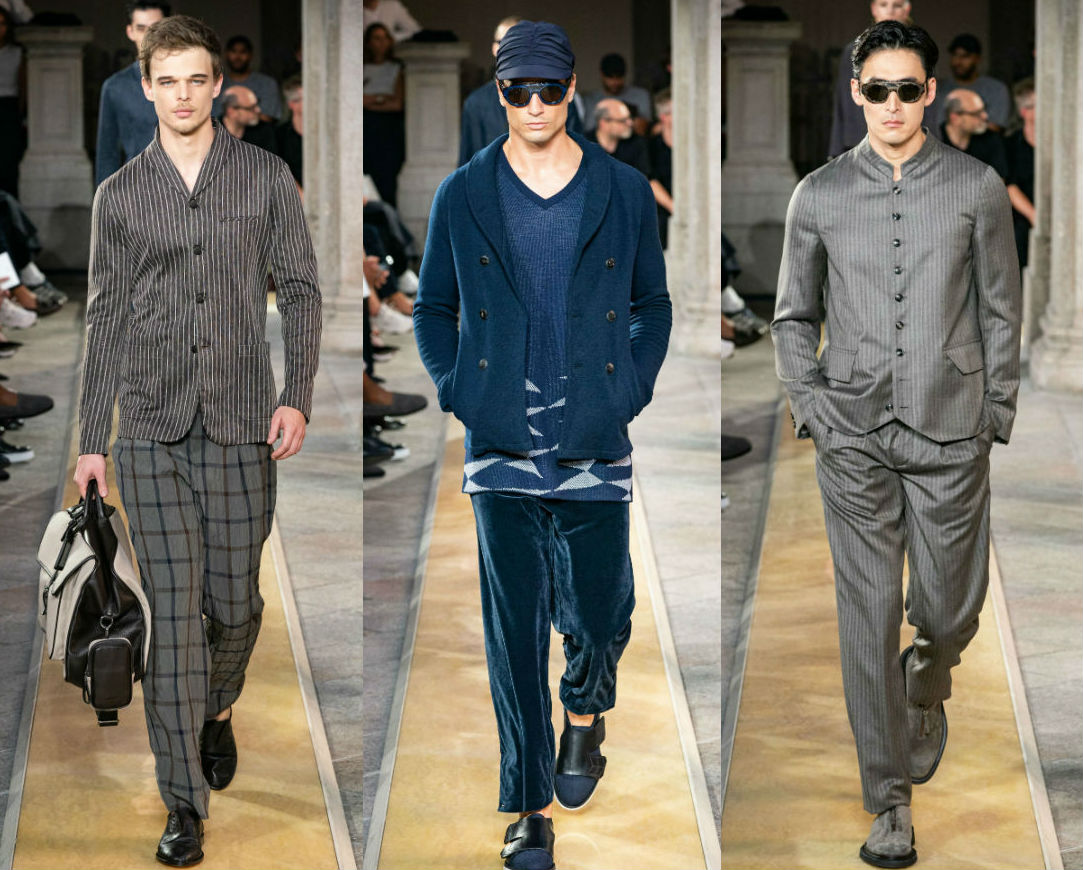 During Milan’s Men’s Fashion Week for Spring 2020, Giorgio Armani took to Via Borgonuovo in Brera to showcase its menswear collection for SS20 that oozed relaxed elegance. And these mostly-moody hues were worked traditionally masculine shapes using light and airy fabrics that lead to a feel that both relaxed yet seamlessly formal, too. Expect linen suit shirts and subtly patterned jacquard garments, high notched collars and high shine metallics and a splash of red with patchwork numbers and thee of GA monogram. 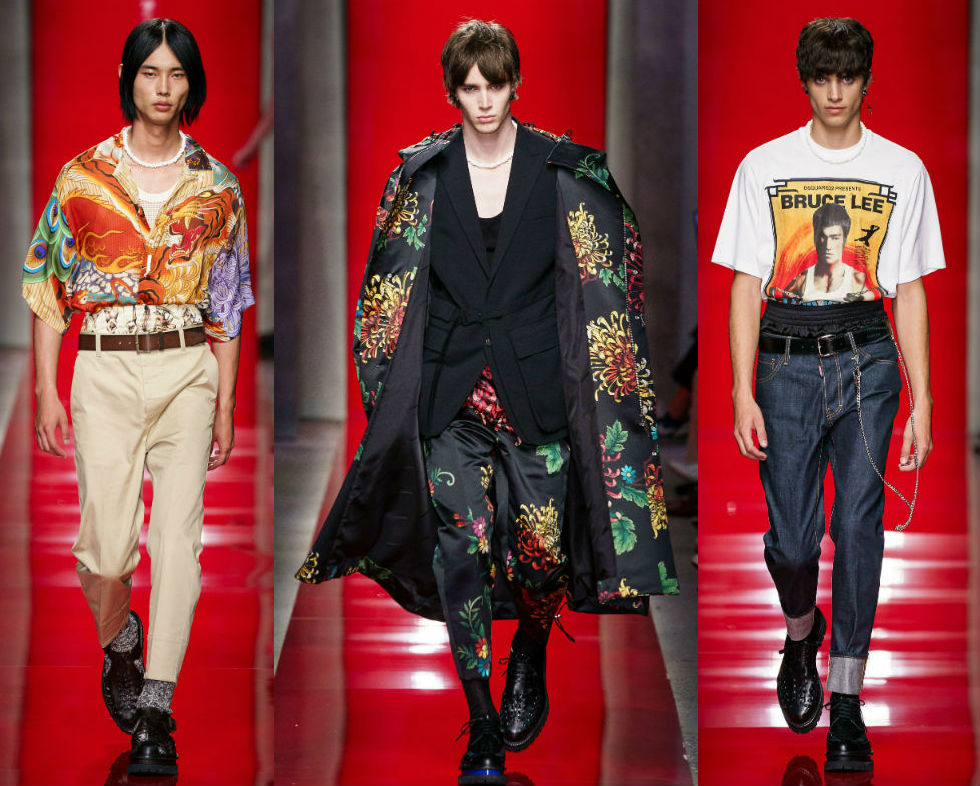 Dean and Dan Caten also looked back to Eighties pop culture when conjuring their latest collection. And likewise, the twin brothers turned fashion designers didn’t go subtle with their admiration for Bruce Lee – and the iconography surrounding him from the era – for their SS20 Dsqaured2 collection. Think printed tees (of the martial arts legend’s face, nonetheless) red florals, animal prints and cuts that mimic traditional martial arts dress. 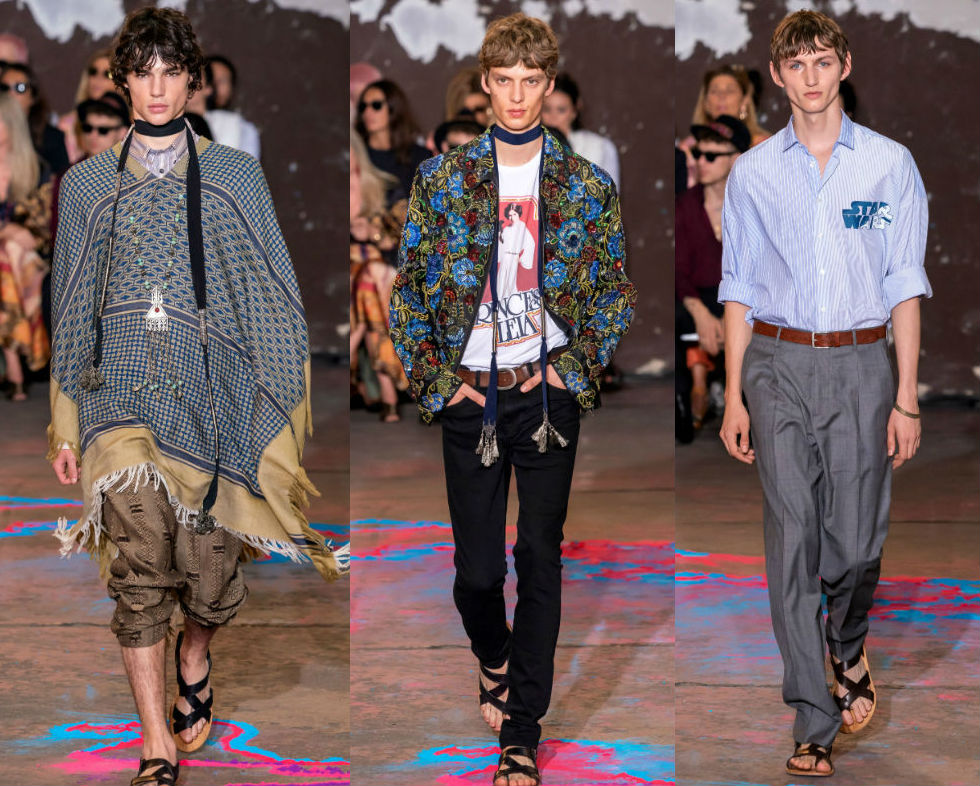 For his Spring 2020 collection, Creative Director Kean Etro didn’t disguise his source of inspiration as something to be mused over or theorised by frow-ers and fashion followers. From sporting the franchise logo over a short sleeves shirt to channelling the costume department, Etro went all in on the Star Wars theme for Spring 2020. The Desert Saga collection saw ponchos make a return in earthy (not, surprisingly, other-worldly) shades, motif tees worn under vibrant blazer jackets, shadow stripes cropped trousers matches with heavy accessories and red worn over beiges, creams and caramels. 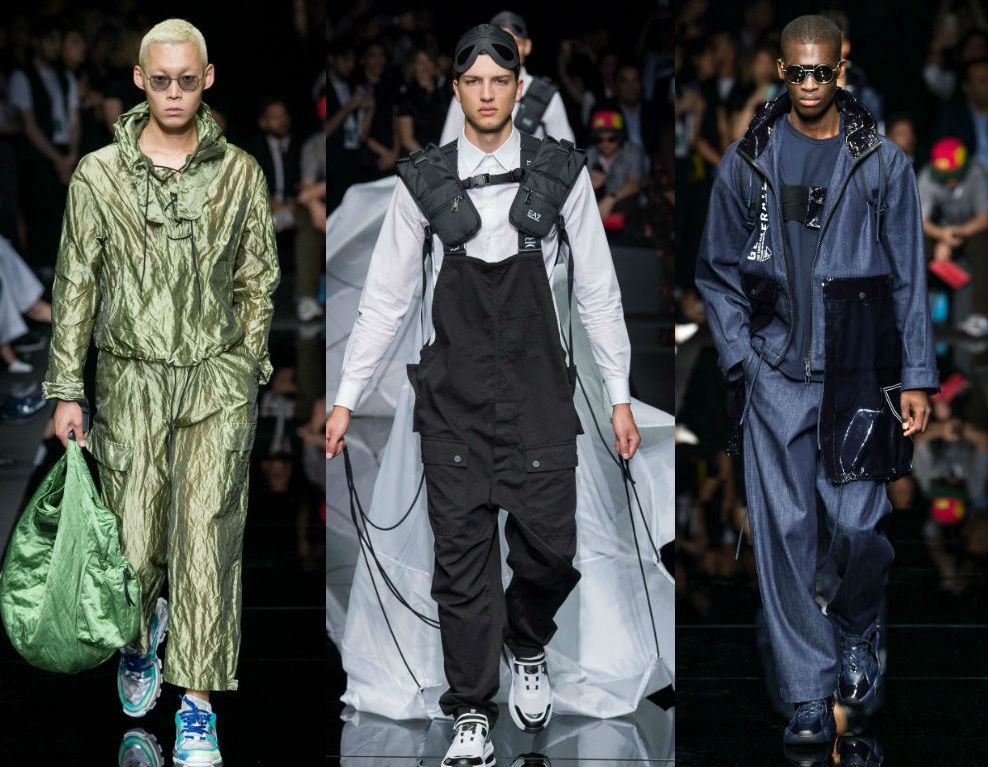 Emporio Armani’s menswear collection for Spring 2020 screamed movement and fluidity, garments falling away from the models’ frame as they strutted along the runway in Milan’s Via Borgonuovo. This movement was mirrored in tie-dye prints, water-rippled metallics and quite literally represented with parachute shapes paired with billowing capes. Dark denims, gunmetal greys and metallic parakeet green were the hues of choice. 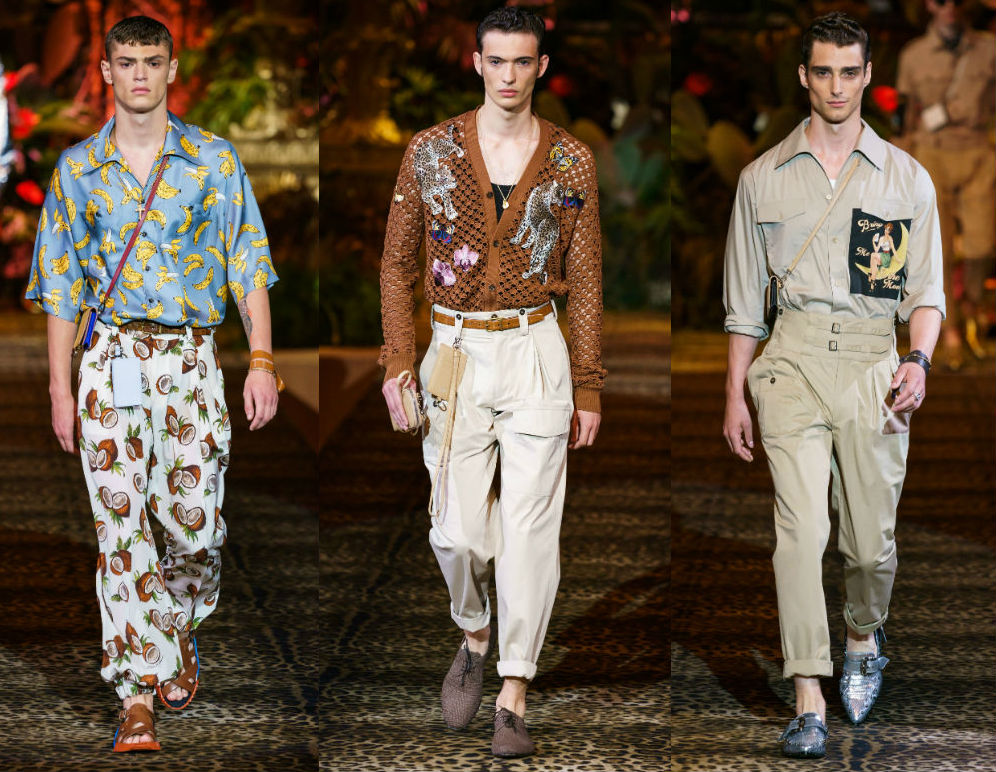 As Dolce & Gabbana took to Metropol theatre to present its SS20 collection for men, it took on a laid-back-explorer feel, with slogans such as ‘Chill & Love and ‘Only Good Vibes’ embossed onto khaki and beige shades of shirts and overall, prints of pineapples, coconuts and bananas and animal print in its many forms. Elements of the forties and fifties were mixed with elements of the eighties to create an overall topical feel by Domenico Dolce and Stefano Gabbana 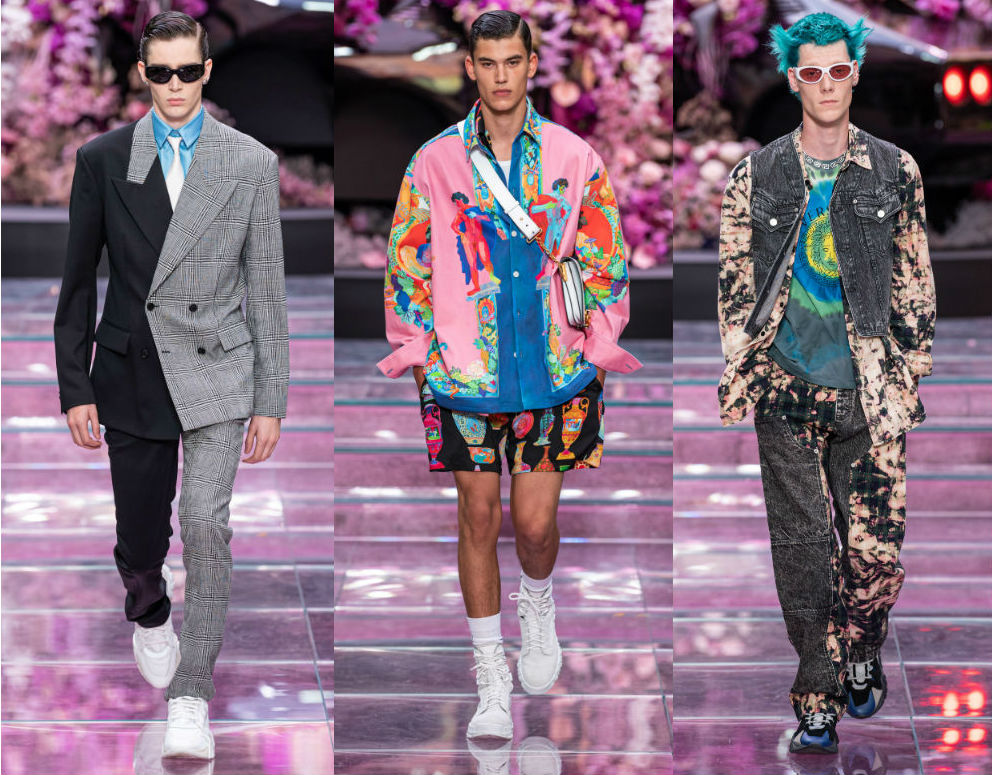 Alongside the Prodigy soundtrack came a collection from Versace that paid homage the late Keith Flint, the founding member of the iconic band and a pioneer within the electronic dance genre. Nineties rave was evoked by models (including the likes of Gigi Hadid) walking the runway draped in leather jackets over forward-point collared shirts and ties, two-tone suits, leopard print and tie-dye hues. 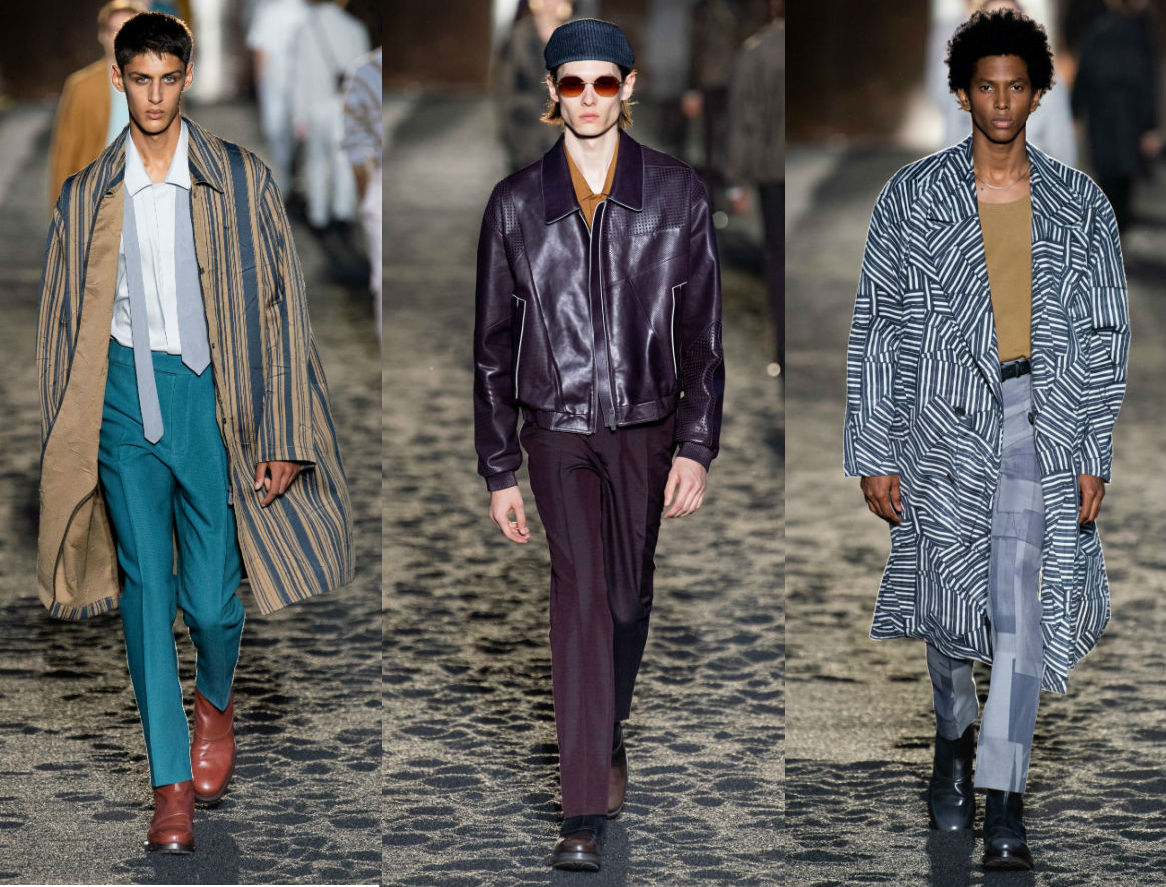 Artistic Director Alessandro Sartori took to former industrial complex outside of Milan, to present 48 menswear looks for the next season, with a focus of sustainable fashion as well as style for 2020. In fact, 20 per cent of the Spring collection for Ermenegildo Zegna was made using upcycled materials, nylon and wool in particular. The overall feel was of an industrial elegance. 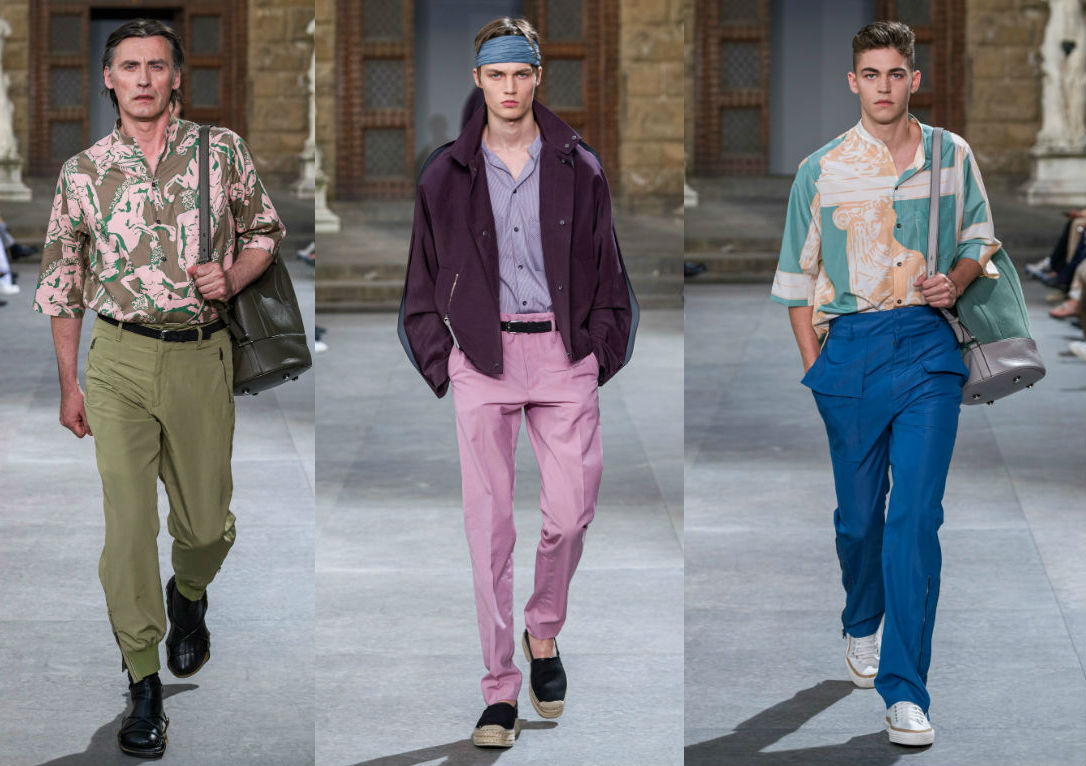 Paul Andrew, who was appointed Creative Director of Salvatore Ferragamo in February 2019, rolled out his first show with the fashion house in its hometown of Florence. And tribute was clearly paid in the collection – expect abstract prints of the Fountain of Neptune, lavender and mint hues, sleek shapes and utility workwear. 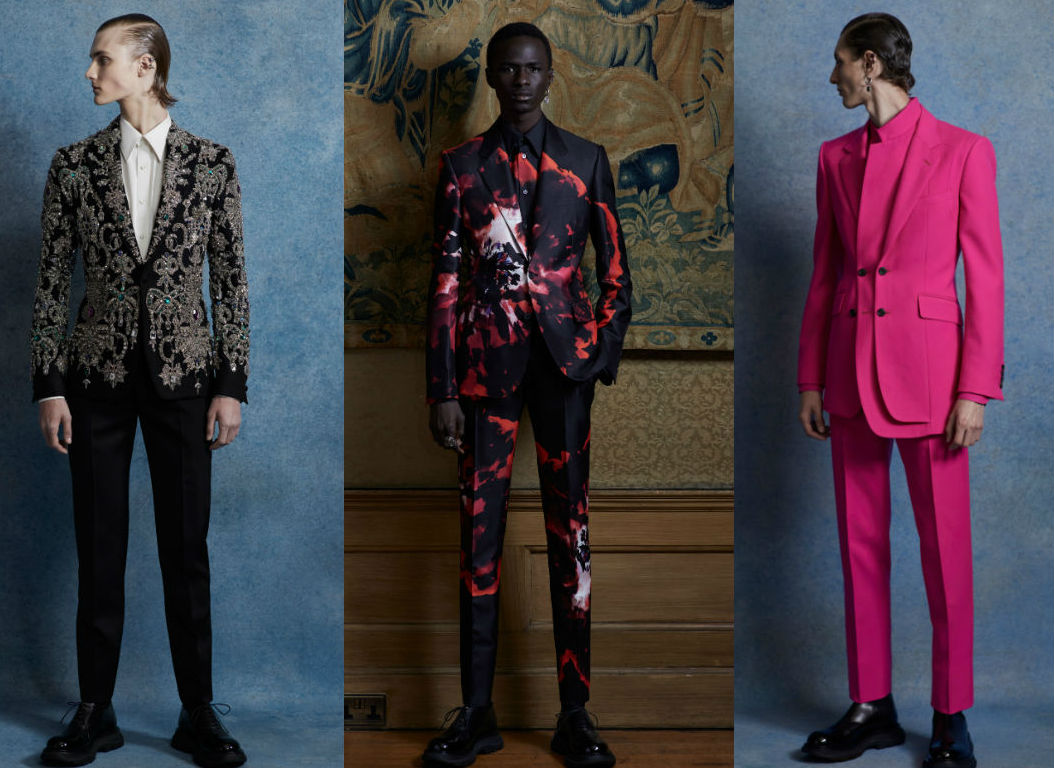 Sarah Burton, Creative Director of British fashion house Alexander McQueen, delivered a loud collection for Spring 2020 – magenta pink, abstract florals and embroidered glamour. An essence of Englishness was presented in both the cuts and fabrics. 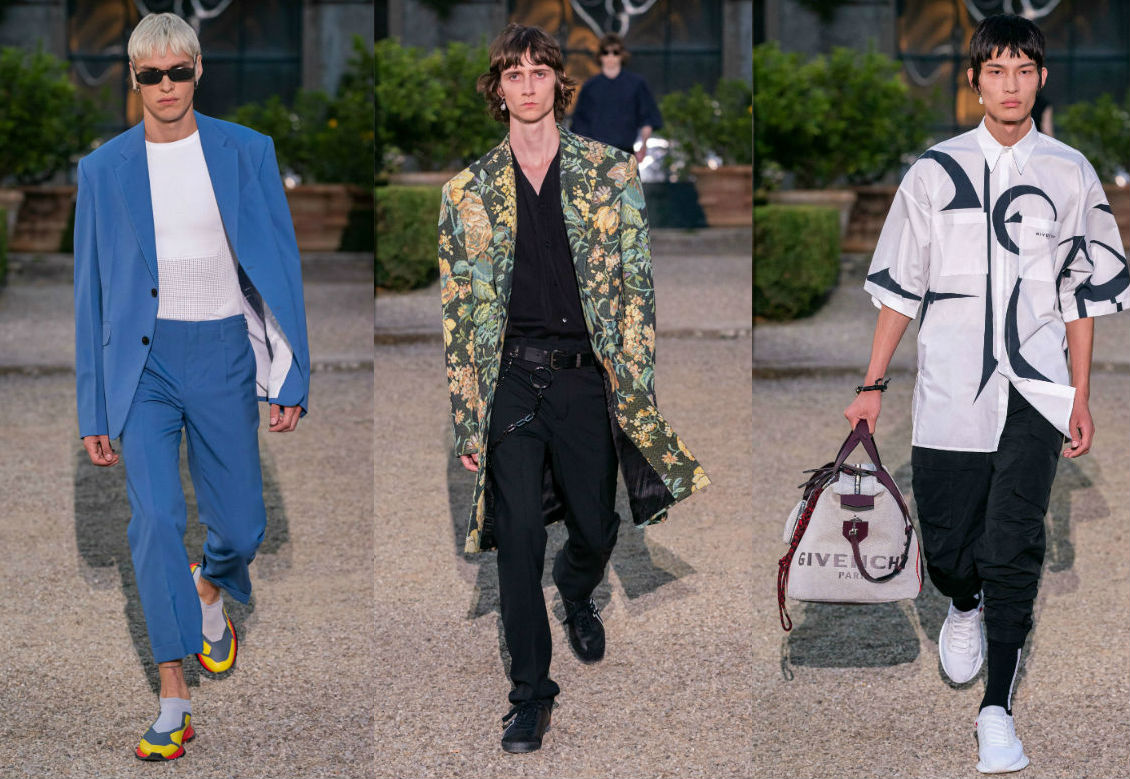 For her first solo menswear collection, Givenchy‘s Artistic Director Clare Waight Keller took inspiration from the streets of Seoul. Suits were worn in every way possible bar the traditional form, and colour ranged from muted pastels to acid blue, and this tailoring was mixed with athleisure style. 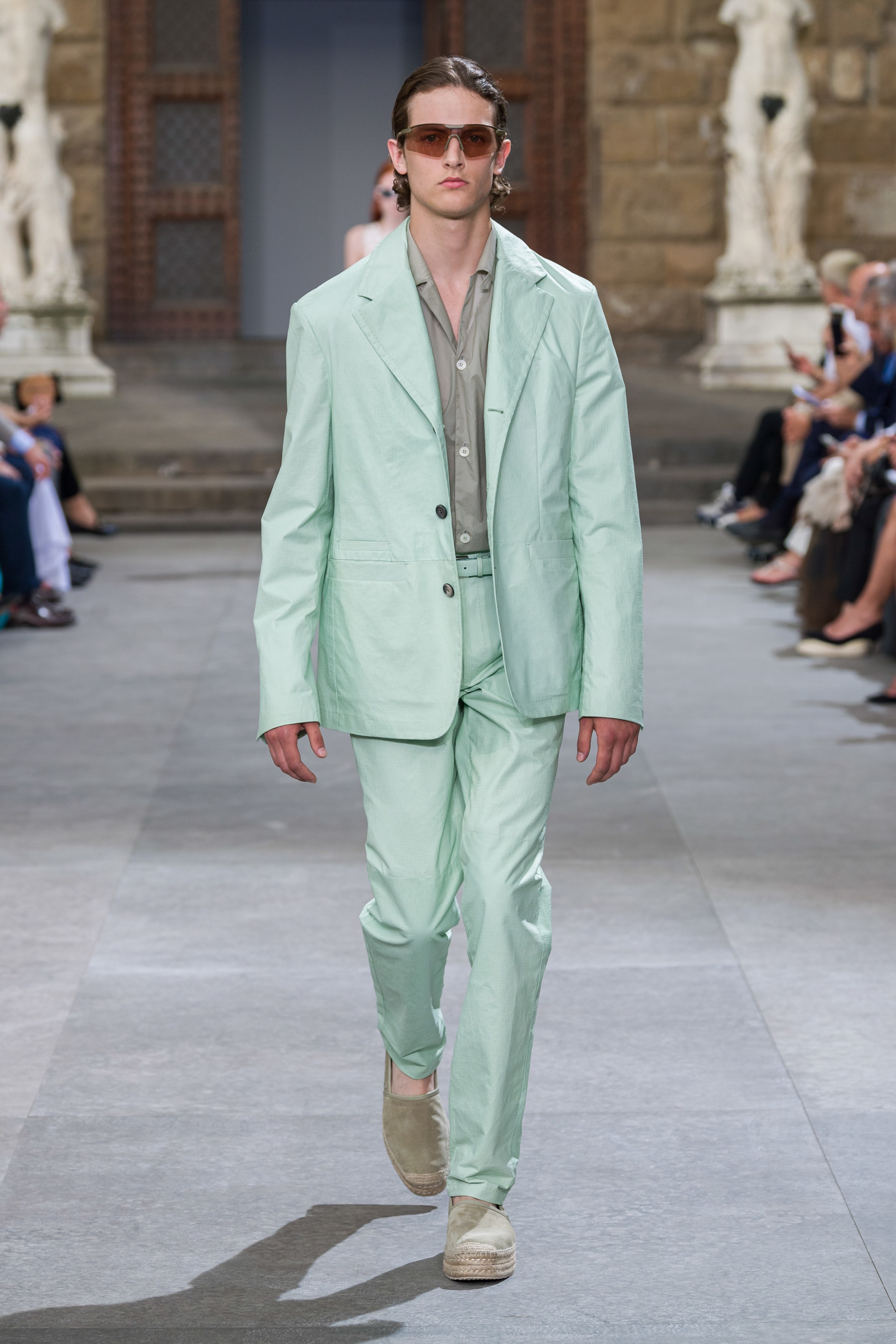 Men’s Style: The New Ways To Wear Denim For Spring 2019