Everything That We Know About The Royal Wedding 2018

With just a few days to go for the most publicized date in 2018- Prince Harry and Meghan Markle’s wedding. Here is everything you need to know about the royal wedding, this coming Saturday.

When and where will the wedding ceremony take place?

The couple will tie the knot on Saturday May 19, 2018, and will take place at the St. George’s Chapel in Windsor at 12 noon.

Who is invited and who will attend the wedding?

Kensington Palace announced that “around 600” guests are expected to attend. Celebrities, who have confirmed their presence to the Royal Wedding, include the Beckhams, all the other members of the Spice Girls,and Priyanka Chopra. Among Prince Harry’s friends, Owen Inskip, Guy Pelly and Lizzy Wilson are to attend. As for Markle’s, Misha Nonoo, Janina Gavankar and Abigail Spencer are expected to be present. The royal couple chose not to invite political figured; but other a-lists who are rumored to be invited are Sir Elton John, Ed Sheeran, Cara Delevingne, and George and Amal Clooney.

Who will create the wedding cake?

Straight from Violet Bakery in London, Chef Claire Ptak has been chosen to make the couple’s lemon and elderflower wedding cake. 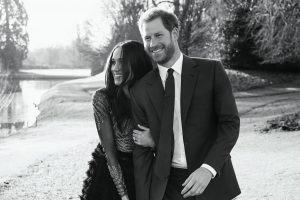 Who will the official photographer of the wedding ?

No other than Alexi Lubomirski, the man behind the couple’s beautiful engagement photographs released last December.

Who will Prince Harry’s Best Man?

Prince Harry has announced that his brother Prince William will be his best man at his wedding.

What is scheduled to happen after the ceremony?

A private evening reception for the newlyweds and close friends will be hosted by Prince Charles at Frogmore House.

Will Meghan Markle Wear Viktor & Rolf On Her Big Day?

These Wedding Shoes Would Be Perfect For Meghan Markle