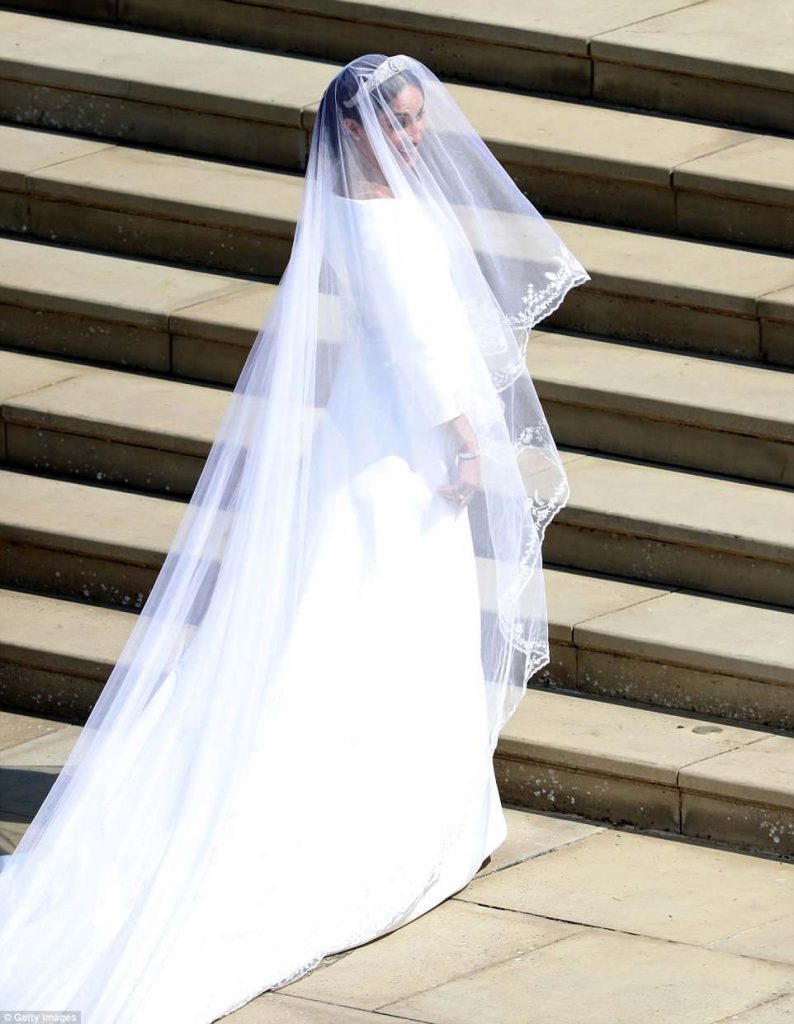 The former Hollywood actress, who is now the newest member of the royal family, looked stunning in a Givenchy gown created by British designer Clare Waight Keller for her wedding to Prince Harry. The dress was simple and understated with an off-the-shoulder neckline, 15-foot veil embroidered with flowers of the commonwealth, long sleeves and a huge nine-foot train. Meghan paired the dress with an Order of Splendour tiara, on loan from the Queen and once owned by Queen Mary.

She also wore diamond earrings by Cartier to complete the look. The dress was the first high profile Bridal gown created by Clare Waight Keller since she joined the couture house earlier this year. The wedding shoes are based on the Givenchy refined pointed SS18 Haute Couture design made of a silk duchess satin. Waight Keller said:

“It is truly an honour to have been given the opportunity to closely collaborate with Meghan Markle on such a remarkable occasion. We wanted to create a timeless piece that would emphasize the iconic codes of Givenchy throughout its history, as well as convey modernity through sleek lines and sharp cuts. In contrast, the delicate floral beauty of the veil was a vision Meghan and I shared, a special gesture embracing the commonwealth flora, ascending the circumference of the silk tulle.

As a British designer at a Parisian Haute Couture house, and on behalf of all us at Givenchy who have been able to experience such an extraordinary process of creativity, I am extremely proud of what we have accomplished and grateful to Meghan Markle, Prince Harry and Kensington Palace for allowing us to be part of this historical chapter. It has been an immensely rewarding experience to get to know Meghan on a personal level, one I will forever carry with me. The House of Givenchy joins me in wishing her and Prince Harry every wish of happiness in their future”

As well as designing the brides dress, Waight Keller also created the looks for Meghan’s six young bridesmaids. Each dress was made from ivory silk Radzimir with puff sleeves and a double silk ribbon tied at the back. The dresses were finished with pockets and paired with shoes by Aquazurra.  The page boys were wearing miniature versions of the looks worn by Prince Harry and his best man William. The outfits were made from blue Doeskin by Dege & Skinner in Savile Row. All of the bridesmaids and page boys had their outfit embroidered with their initials.

The ceremony took place this afternoon with over 2,000 guests including friends and family of both sides including The Queen, Prince William and Harry’s father Prince Charles. The wedding is the biggest royal wedding in Britain since Prince William Married Kate Middleton in 2011 and will be the last major wedding within the Royal family for decades. Harry chose to wear traditional military uniform for the event.

The queen wore a bright green jacket and floral printed green and purple dress with a matching Stuart Parvin hat by Angela Kelly. Meghan’s mum Doria Ragland chose a pale green dress and jacket by Oscar de la Renta, with matching hat, while Kate Middleton opted for a cream jacket and dress by Alexander McQueen. Also in attendance was George and Amal Clooney who wore a yellow dress by Stella McCartney. Serena Williams, a close friend of Meghan’s who wore a blush pink dress by Versace. Victoria Beckham wore one of her own designs and husband David chose a suit by Dior Homme.

The two will continue their celebrations this evening with a wedding reception which will see entertainment from Elton John.