During the Haute Couture shows for Spring/Summer 2019, natural beauty took a backseat as models stepped into the dramatic, even fantastical, power of makeup. 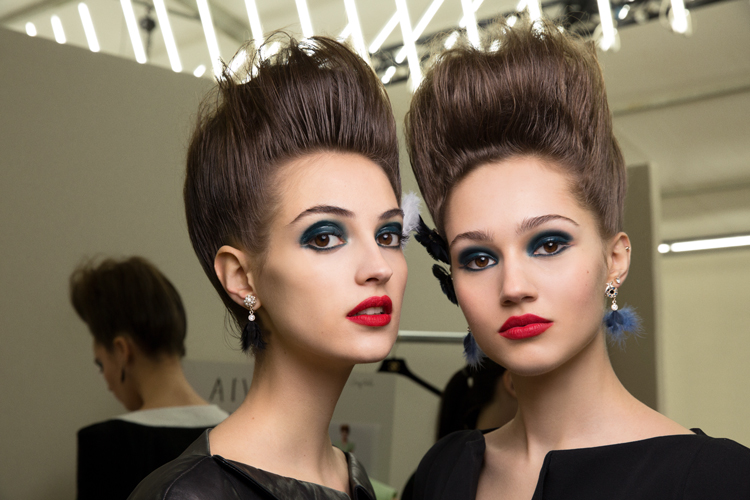 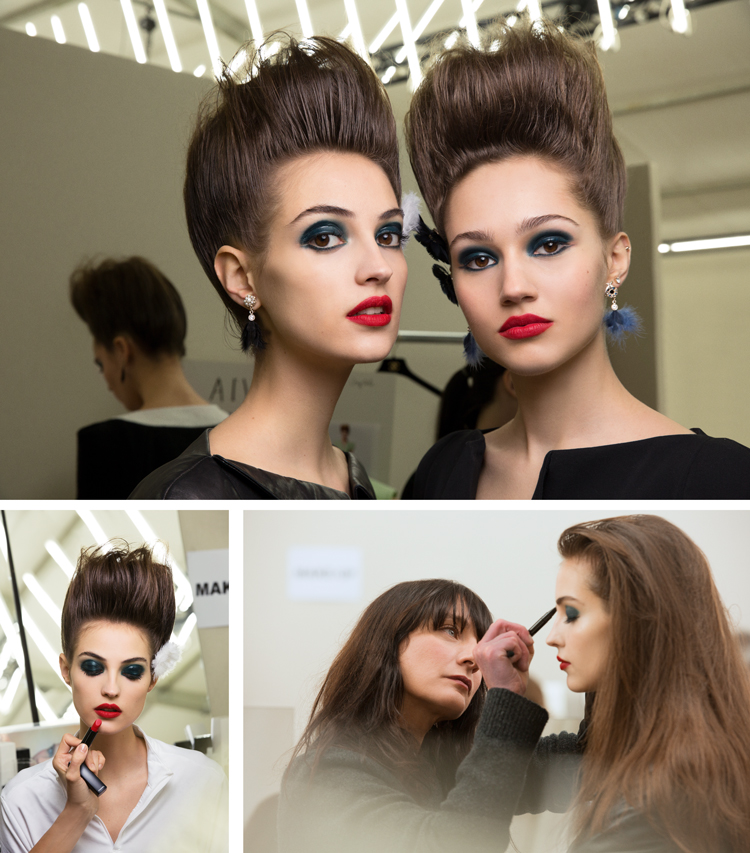 As Karl Lagerfeld presented a collection inspired by merchants supplying wealthy eighteenth-century Parisians with luxury goods for Chanel earlier this year, the world didn’t know it would be one of the last marks he would leave on the fashion world. The collection featured ornate floral details, embellished swimsuits and full skirts with shades of aqua and pink blossoming.

And the beauty looks from Chanel’s Global Creative Make-up And Colour Designer, Lucia Pica, followed a similar colour palette and exaggerated tone, breaking a key make-up rule along the way with both heavy eyes and lips.

Bold eyes came in the form of olive-tones applied from under the brow bone, and again on the lower lids. To avoid closing eyes in, the eyeshadow didn’t meet along the outside of the eye, and white liner was traced along the waterline for a brightening effect. Meanwhile, lips were accentuated with matte crimson red hues extending the lipline slightly outside of its natural end, filling out the model’s pout.

Matching the up-standing beehive hair, brows were brushed upwards in the same direction, too. 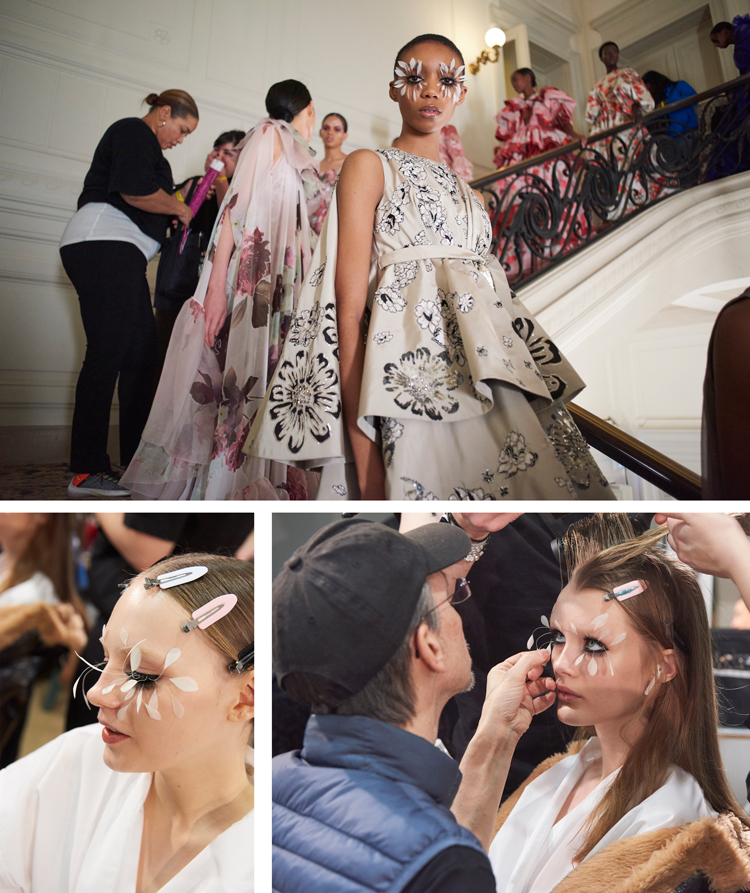 The show that brought Paris’ Haute Couture season to an end was one of the most moving yet, and the beauty looks were as beautiful as the elaborate collection by Pierpaolo Piccioli.

Backstage, Makeup Artist Pat McGrath used feathers to represent Valentino’s mission statement to demonstrate that everything turns, rotates, evolves, repeats, changes. Feathers represent flight and movement in their origin and fluttering effect. In matching tones to the garments, dramatic feather extensions were delicately applied over black liner. With brows lightened and adorned with feathers too, the overall effect was graphic.

It’s not the most wearable of runway beauty looks, but it’s certainly striking. To tap into the collection’s merging of fantasy and reality, elsewhere beauty looks on the runway were minimal, just focusing on glossy skin that radiates from the inside out. The minimal beauty look as complimented by toned-done hair flattened in a side parting and tied back. 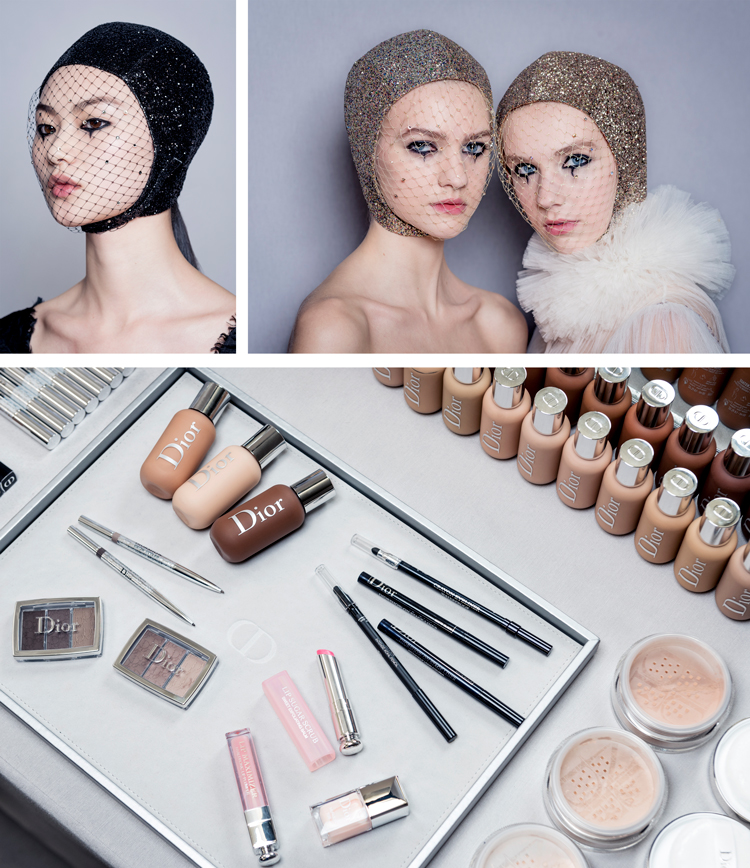 Once again, Creative and Image Director of Christian Dior Makeup, Peter Philip, went for statement eyes backstage during the SS19 show, even if his noir-encased lids would be hidden under a netted cap in Maria Grazia Chiuri ’s circus-themed collection. Playing into the show – which featured whimsical and theatrical garments such ringmaster jackets and ruffled neck ruffs – Peter curled the lashed and framed the eyes with thick coats of black liner.

In alignment with the models’ pupils, he then drew a vertical line that goes down to create like a pierrot effect, smudging any lines that were too sharp for a softer, worn-in feel to the circus look.

To ensure this was the focus point – with so much going on within the theatrics of the catwalk show – skin was simply complimented with light foundation coverage and concealer top-ups, with a faded natural pink shade on the lips.

True to form, Armani Privé’s collection took inspiration from the world of art, the 1920’s era of Art Deco being the muse of choice this time around. Tapping into this exuberance, the beauty aesthetic very much aligned with the clothing collection – jacquard suiting, sashaying dresses and beaded cloches in hues of blood red and electric blue – with a signature stroke of crimson eyeshadow on the lower lids.

From encasing the tear ducts, the powered texture was drawn heavily across the lids, slanting ever so slightly downwards towards the outer eye. This did all the talking as lashes were only granted thin coats of black mascara. To balance out the striking look, the rest of the models’ make-up was modest.

International makeup artist for Giorgio Armani Beauty Linda Cantello coated lips in a sheer lipstick that served a toned-down version of the bold eye colour, while the complexion was minimal with just a touch of shine where the temples and cheekbones meet.

READ: Fix Your Mistakes With These Makeup Expert Tips