A year ago, almost all of the top fashion brands showcased their Cruise collections across the globe. But this time around, the majority has decided to show in one country- in France.

Last night, Dior revealed its Cruise 19 just outside of Paris at the iconic Domaine de Chantilly- one of the largest stables in Europe, which was built for Louis-Henri de Bourbon, the 7th Prince de Condé in the 1870s. The location carries a great importance to the brand and especially to Maria Grazia Chiuri who welcomed her opulent lineup in a one-of-a-kind architectural setting. 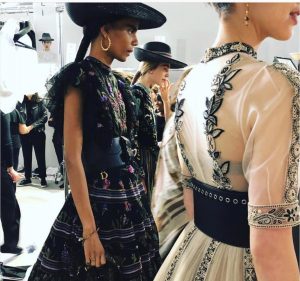 Yes you heard that right; it was a wild night at Diorodeo. Chiuri’s main inspiration was the escaramuzas- a term that literally means a woman who rides a horse in a dress and participates in Mexican rodeo shows called charreada.

The brand actually flew a whole crew of real Mexican cowgirls, who opened the show extravaganza riding in custom-made full embroidered skirts and wide-brimmed hats. This was an act of celebrating strong women, which has been strongly infused across the whole collection.

Minutes after, the Dior girls powered in edgy ruffles on tiered dresses and intricate voluminous skirts. Mainly a monochrome lineup, it also featured tailored tough coats and feminine silk dresses were roaring with wild prints of serpents and tigers. Naturally the Dior heritage always being the main focus, there were iconic tulle skirts balanced with combat boots, smart skinny ties that fell effortlessly on shirts and exquisitely fitted bar jackets, giving the perfect hourglass silhouette. Of course model’s hair was slicked into a ponytail, and the escaramuzas and their horses stayed in place throughout the entire show.

Despite the storm, it was a theatrical show all about female strength; a night we never thought we’d witness.