The raffia bag trend is returning for summer, but this year it’s back with a courageous colourful twist. 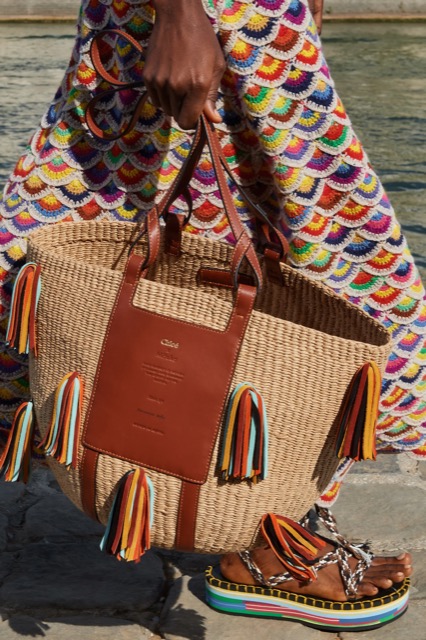 As we enter a new season and prepare for summer vacations, it’s time to think about staple accessories, for both function and fashion. Choosing the perfect holiday bag is essential, you’ll want something that is sturdy and stylish but compliments both day and night outfits. This season it’s all about bright and bold raffia bags, taking this popular accessory trend to a new level with the addition of a rainbow colour palette. In honour of the return of raffia, we discover more about the history of this bag and style and find out why it has made such a daring comeback. 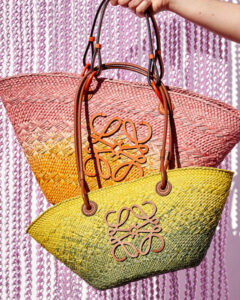 Originally, this style of woven bag was created using husks of corn, standard straw grass and even crocheted paper. They were often used for practical purposes, due to the availability and strength of the material, people would use them for carrying food, water or even children! It wasn’t until the 1950’s that the real straw bag breakout began. Ladies wanted something strong to hold their cosmetics in, and so over time, straw bags became smaller and more lightweight. They were not high on the luxury list or classed as sophisticated, they were more of a street style chic accessory to wear with jeans. The bags appeared more like picnic baskets, which were rounded at the bottom with a loose lid that would sit on the top with a chunky handle. 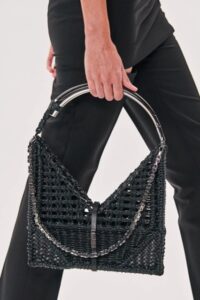 But in the 1970s raffia first had its big moment when actress and musician, Jane Birkin brought the wicker bag up through the rankings and into the luxury world. Jane was recognised for her stunning beauty and hippy sense of style and was often seen carrying her raffia-style bag on outings to the local market. It was Jane’s famous wicker bag that was responsible for the iconic Hermès bag we know today as the Birkin. On a flight between Paris and London, as if by fate Jane Birkin met Jean-Louis Dumas, the executive director of Hermès at the time. After placing her bag into the overhead compartment, the contents spilt out onto the floor as a result of the unattached lid. It was then that the pair began their discussion on a more practical bag, scribbling down ideas for the Hermès Birkin. Since Jane’s famous wicker bag, this natural material design has developed over time, with Raffia taking its place as a more delicate, functional, and luxurious style.

Raffia fibre is produced from the membrane on the underside of a leaf found on the Raphia Farinifera (or Raffia Palm) which is found in parts of South East Asia, Central and South America and Madagascar. Collectors travel deep into the forest to harvest the grassy fibre from the leaves. The fibres are then dried in the sun, turning them into a recognisable neutral beige colour. Raffia can be made into twine and rope and is used for many different craftworks by being tightly woven into different patterns and shapes. 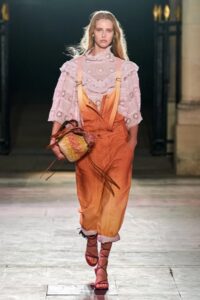 We have seen Raffia dip in and out of luxury collections over the years, appearing on white woven bags for Balenciaga’s 2016 Spring/Summer collection, and as dresses and hats in Oscar de la Renta’s 2020 Spring/Summer offering. Mostly, raffia remains in its original state with the natural brown tones of the material, however, this year, designers are adding their own twist to meet the desires of the modern fashionistas and create a fresh bold look. Colourful pops of Raffia are now appearing woven in different patterns and blended with other materials such as leather, canvas and metal.

Prada has released a new season Raffia Tote, perfect for shopping sprees and beach excursions. The unlined raffia gives a rustic look with their signature logo branding for a luxe finish. Available in a range of bright colours, this bag can be worn with a trendy maxi dress for those boho beachy vibes. The Paula’s Ibiza collection by Loewe also features a large selection of brightly coloured and ruffled raffia bags, the two-toned Anagram Basket bags were literally made for this Spanish destination. In contrast to these, more for an evening than the beach, the Tod’s T Timeless collection features a brown leather mini shoulder bag with a rainbow of raffia inserts and their iconic metal T. Many other luxury brands are also claiming their place in the raffia market, some of these include Marni, Chloe, Jacquemus, Stella McCartney, Valentino and Burberry. Raffia is the splash of colour we all need on our handbags, and we for one, a super glad it’s here for summer!