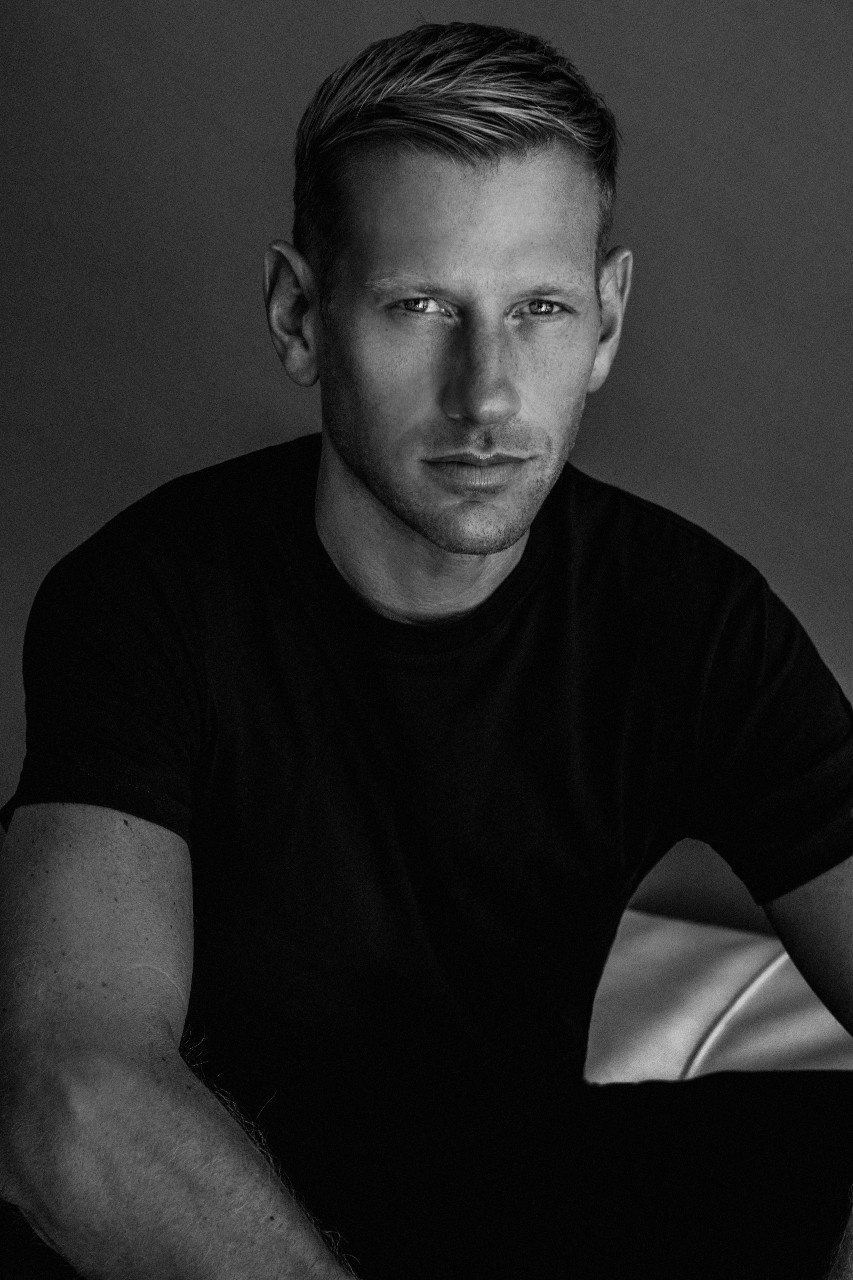 Last September, Salvatore Ferragamo’s women’s and men’s Spring/Summer 2021 fashion show at Milan’s historic Rotonda Della Besana opened with a cinematic presentation created by Italian film director Luca Guadagnino. The movie was a homage to Milan and a celebration of the films of Alfred Hitchcock, whose three classic titles “The Birds”, “Marnie” and “Vertigo” were instrumental inspirations for the season’s collection. Filmed during the quiet summer months last year, Guadagnino and Paul Andrew set the movie in a series of beautiful Milanese locations and depicted moments of suspense, intrigue, and beauty. 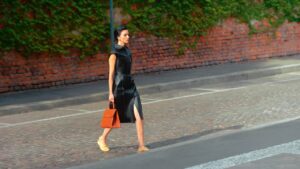 The decision to create a film to present this collection as well as a traditional runway show was taken in light of the COVID-19 situation which made it impossible for most of the audience to be physically present. The movie allowed the audience, wherever they were in the world, to immerse themselves into Andrew’s image for this collection. As a big fan of Guadagnino’s work, Andrew chose to collaborate with the director as he saw a similarity between his work and the work of Alfred Hitchcock. After seeing Guadagnino’s film “I Am Love” Andrew has always wanted to work with Guadagnino and this seemed a fitting opportunity. The Spring/Summer 2021 is heavily influenced by the technicolor vibrance of some of Andrew’s Alfred Hitchcock classics and Guadagnino agreed to help evoke that by directing the film in technicolor.

The Milan-shot movie showcases some of the city’s most atmospheric locales alongside a cast of models wearing Andrew’s thrilling and powerful new season pieces. The imagery of Guadagnino and designs of Andrew combine to conjure a haunting and ambiguous series of Milanese mise-en-scenes. A collection designed in lockdown, this season’s offering is a special one that is very close to the heart of the designer. We discover more about the latest collection as well as getting an exclusive insight into the making of the film. 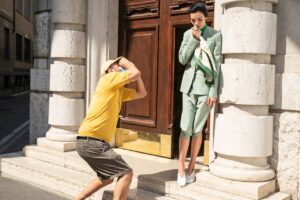 Is this your first foray into film?

Nothing I’ve ever been part of before compares to working with Luca, because he is a genius with a distinct vision and a mastery of his language. In the past obviously, we’ve produced filmed content to present Ferragamo on social media and in other contexts but not something such as this. When I was a boy I was very into theatre – I was a very keen drama student at school and acted in many (probably terrible) productions! But as for Film with a capital-F? Absolutely.

Did you consider the film a supplement or replacement to a fashion show, and why?

We made the film to coincide with the Spring Summer 2021 collection, and we were fortunate enough to be able to hold a physical show for that collection last September outside in the cloisters of the Rotonda della Besana, which is our usual and very beautiful venue in Milan. We premiered the film as part of that show, so the audience who were able to join us, watched it on big screens, then we segued straight to the runway. For those invited who were unable to travel we sent Oculus Rift devices to maximise their immersive digital experience, and of course, we streamed everything on all our digital channels for everyone to see. So the film was very much a supplement – I’d like to think an enhancement – to the show for every member of the audience, wherever and however they were joining us. 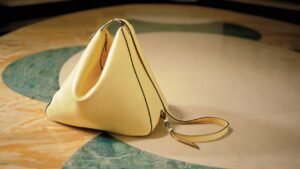 Can you tell us about the contrast between nature and architecture in the film, and in the collection?

I designed this collection back in March and April 2020, when we were all confined to our homes. Apart from working out, cooking many new recipes, and binging on Hitchcock movies, I spent a lot of time staring out of the window and watching change unfold. Florence is typically a very bustling city, full of locals and tourists from all over the world, it’s rich in human life unfolding against the canvas that is this beautiful and ancient place. Without those people, the atmosphere felt all at once very suspenseful and increasingly strange and surreal. Very quickly nature began to reassert itself. Wildflowers bloomed between paving stones on the street outside my window, and all the little parks and patches of green exploded with life – just as human life slowed down. It was beautiful but unsettling! That feeling was something Luca and I discussed exploring in the film. When we shot in Milan during August the city was extremely quiet because of the holidays. That gave us the freedom to focus on the models and the collection against a backdrop that showed some of Milan’s beautiful architecture and the surprising amount of nature hidden in and around the city without any background movement. As for the collection, some of my lockdown sketches of those urban Florence wildflowers were used as decorations and more fundamentally the emergency of 2020 has intensified our instinct to place sustainability at the heart of our creative and manufacturing process.

Does the mystery in the suspense in the film derive from your watching of Hitchcock?

Absolutely! Strangeness in stillness is one of Hitchcock’s key tools for unsettling the audience – providing the hint of something amiss that creates suspense is something he was master of. And his focus on particular details, like the yellow handbag in “Marnie” that we recreated in the collection, is so effective at communicating an unexplained significance. 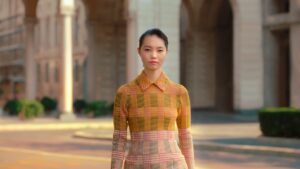 How do these emotions speak to the present day?

Suspense is a heightening of awareness, and I think all of us have been through and are in now a period of heightened awareness! This is a time in which everything feels amplified and extreme, but we can take ownership of that through our own attitude and actions. Hitchcock was the first master of turning suspense – the fear of something dreadful – into an experience people found exciting. When the world feels beyond our control it’s more important than ever that we have a healthy and positive perspective through which to see it.

What is the appeal of Hitchcock to you? Did the director’s films impact the film and the collection as well? In what ways?

I love Hitchcock for many reasons; the storytelling, the style, the suspense…. And I especially love his use of colour in his later movies. He saw the potential of technicolor to create visual points of attention that can be both alarming and alluring. Absolutely his work inflected Luca’s film, and the collection plays a part in that: the technicolor pieces pop on screen just like in the opening scene of “Marnie”. Also, mid-century classicism, which is quite conservative but also very expressive – and through the behaviour of Hitchcock’s characters sometimes potentially transgressive – is an aesthetic I riffed on while keeping my intentional 2021 audience firmly at the forefront of my mind.

What sticks with us is the recurrent sound of footsteps, even more than the nice music. Does that sound have a particular symbolism?

Well it goes back to solitude, and the heightening part that shattered quietness can play in triggering suspense. Also footsteps are the fundamental percussion that signal a human presence. And then of course there is the important role in creating them that is played by something very close to my heart: shoes! 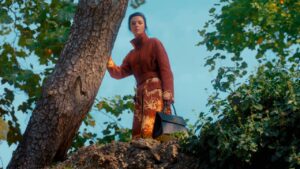 We noticed a lot of draping in this collection that recalled some 1950s Italian design?  What was your inspiration?

I was a 1990s kid so that period’s purity and minimalism in fashion is always bubbling around in my work – it was formative, as were my years in New York. During my time with Ferragamo, however, I’ve learned to recognise the purity and precision that can be expressed by richer and more decorative aesthetics. Once you’ve got used to Florence’s abundance of almost excessive beauty in art, architecture and design you start to become attuned to the agency and expertise of the maker. So I’ve got a much wider eye these days I guess, because I appreciate the logic and coherence that are a precondition to design however it is articulated – and in design history the mid-century period in Italy, whether it was in furniture, fashion, architecture or art was a period of abundant creativity and innovation. So yes, that was part of the mosaic for sure, as was Hitchcock, and Salvatore Ferragamo’s archive which is an inspiration I turn to almost daily, and not forgetting those wildflowers outside my window…. There is never a single inspiration for a collection, it is always a happy jumble of multiple sources.

In your opinion, were the characters in the film yearning for connections, avoiding them, or just missing them?

I love the fact that you see that built-in choice, which is exactly the kind of versatile ambiguity that we were looking to generate. That conclusion is up to every viewer to make, or not to, and I think your answer is a reflection of your own state and attitude. For me though, I think they were yearning for connections to cherish!

What is the importance of connection to you?

Everything, because design is connection. 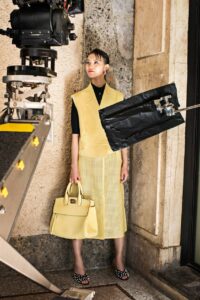 Can you tell us about some of your favourite shoe and heel designs?

Asking me to specify is like asking a parent to choose a favourite child! But with apologies to all the other labours of love in this collection I’d nominate the rebooted F-heel. It’s based on this incredible design Salvatore Ferragamo dreamed up when looking at the prow of the steamer that took him back home to Italy from the US, where he’d become famous for making shoes for Hollywood stars and film productions in the 1920’s. The design is nearly 100 years old but it still looks futuristic. It’s a shoe in which the foot appears to hover over empty space, and to be honest all we have done is refine and upgraded it to be appropriate for the demands of today – its genius belongs to Salvatore entirely. His time in Hollywood was the starting point of my thinking that led me to ask Luca to work on this project. This company is very Italian but it is very American too – Salvatore Ferragamo’s legend was born in Hollywood.

Just to say that all great films deserve a sequel – but only if the sequel adds a fresh dimension to the original! So please watch this space…