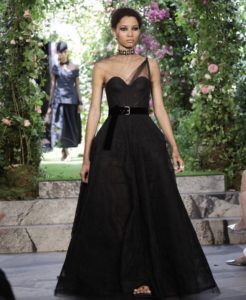 Dior’s Artistic Director Maria Grazia Chiuri recently told us that what she strives to achieve with her shows is for the audience to take away an emotion. The Haute Couture 2019-2020 show created an emotion around the grace and strength found in women, brought to life inside 30 Avenue Montaigne – Dior’s historic Maison, evoking a feeling of sentiment and anticipation.

Maria Grazia Chiuri was inspired by the Cariatides of Paris. These ancient female sculptures can be found within the architecture of Parisian buildings, sitting high above the city’s streets. No one knows how they came to be or what these women represent.

Through centuries the caryatids – an Ancient Greek term for sculptures that are part female form, part column, have come to be a metaphorical illustration of the supporting role women play both in architecture and in society.

It is with these concepts in mind that’s Chiuri’s vision for this collection is very closely tied to architecture. Chiuri worked with artist Penny Slinger who offered her interpretation of the Avenue Montaigne – Dior’s historic Maison, bringing to life the show space with natural elements – trees, a garden – all incorporating the elements of nature. 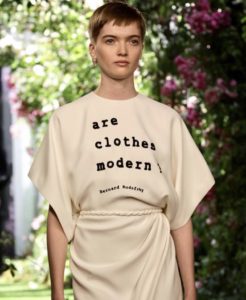 The show was opened with a slogan dress reading “are clothes modern?” a question asked by the Artistic Director to set the mood of the show, which could be perfectly described as modern grace.

There was a certain Ancient Greek influence thanks to the toga-style cuts and loose-fitting materials but it was somewhat ironic thanks to Maria Grazia Chiuri’s chosen colour palette which mostly consisted of black. While it was a recognition of architecture, this collection also celebrated the beauty and versatility of black. As models were mostly all dressed in the universal colour, they represented columns – striking as they graced the runway. 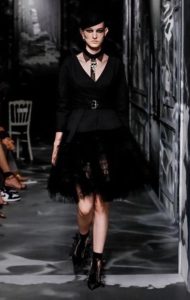 The pieces felt quite gothic but feminine at the same time thanks to the choice of lace, fishnet and tulle. Some looks were decorated with fringing and tassels, while others were studded or finished with feathers. Geometric lines represented architectural designs and made each piece striking and strong – perhaps a nod to the image of the modern woman? 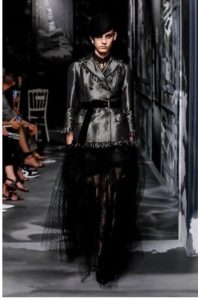 The classic Dior silhouette complete with Bar jackets were accentuated with pleating, winged sleeves, and complemented with lace. There were forties inspired silhouettes with off the shoulder cuts. The one-shoulder dress made a strong return and ballet style dresses were still firmly placed within this feminine collection. 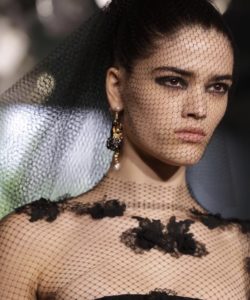 Created by Peter Philips, Dior Make-up’s Creative and Image Director, the make-up look had a strong focus on the eyes with dark smoky liner accentuating the models’ faces, while the face and lips were kept at a nude palette. 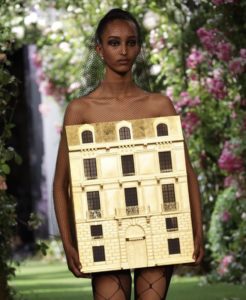 The closing look – a model wearing nothing other than a golden building – represented the essence of this collection and firmly concreted the designer’s inspiration.