Chanel Cruise 2020: Virginie Viard Presents a Collection for the Adventurer 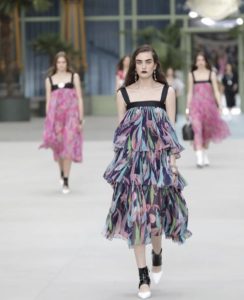 Chanel’s Cruise 2020 show was eagerly anticipated as it was to be the debut collection designed by since she took the reins after Karl Lagerfeld passed away.

There was a relaxed atmosphere in the Grand Palais as Viard decided to take the audience on a journey with models walking the runway in a setting that resembled a Beaux-Arts style train station. The House promised an adventure as the Grand Palais was transformed with railroad tracks over which one can picture trains setting off for sunny destinations. 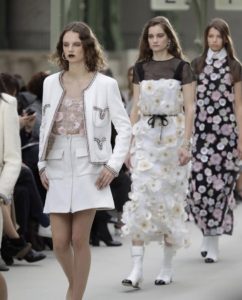 And the designed perfectly fitted the idea of adventure. Playful, whimsical creations in pastel tones and floaty fabrics brought life to the runway. Taking inspiration from the early 20th century, Viard perfectly combined this classic era with the needs of the woman of today with functional yet feminine pieces that were perfectly wearable. Whether it was the loose fitting summer dresses or cigarette trousers with kimono jackets, these was a sense of realness about this collection that had a strong sense of adventure. 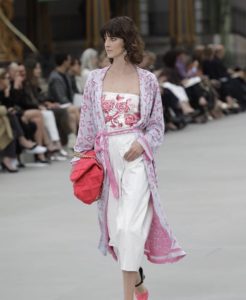 Floaty ruffled dresses in colourful printed fabrics were juxtaposed with elegant jackets. Loose fitting kimono jackets were worn over jumpsuits, and bow shaped tops, while sleeveless jackets, capes and smarter pieces were designed for the working woman. For evening wear it was adventurous again, the kind of designs one would wear o holiday. One shoulder cocktail dresses, decorated with colourful sequins and dresses covered in appliqué flowers were light, playful and fun. 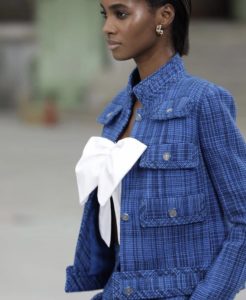 When it came to the details Lagerfeld was represented perfectly throughout the collection with the prominence of the bow – one of his favourite accessories. Bows were in the form of tops, belts or details on dresses. Headscarf’s gave a sense of adventure while oversized pearl-detailed jewellery and earrings ensured  there was plenty of glamour in each look. 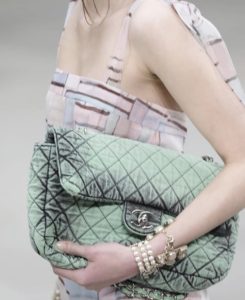 As for bags, there was a sense of function with backpacks and crossbody bags taking the lead while others were held tightly under the arm. Accessories came in a rainbow of colours that will add a playful accent to any look.