This festive season Chanel has partnered with French illustrator Jean-Paul Goude to celebrate the magic of the holidays through an exciting campaign. Goude has been a loyal contributor to the brand for nearly thirty years, and this December he immerses the customer into his artistic world filled with joy and fantasy through a playful campaign celebrating Chanel’s iconic fragrance N°5 L’EAU and staring brand ambassador Lily-Rose Depp. 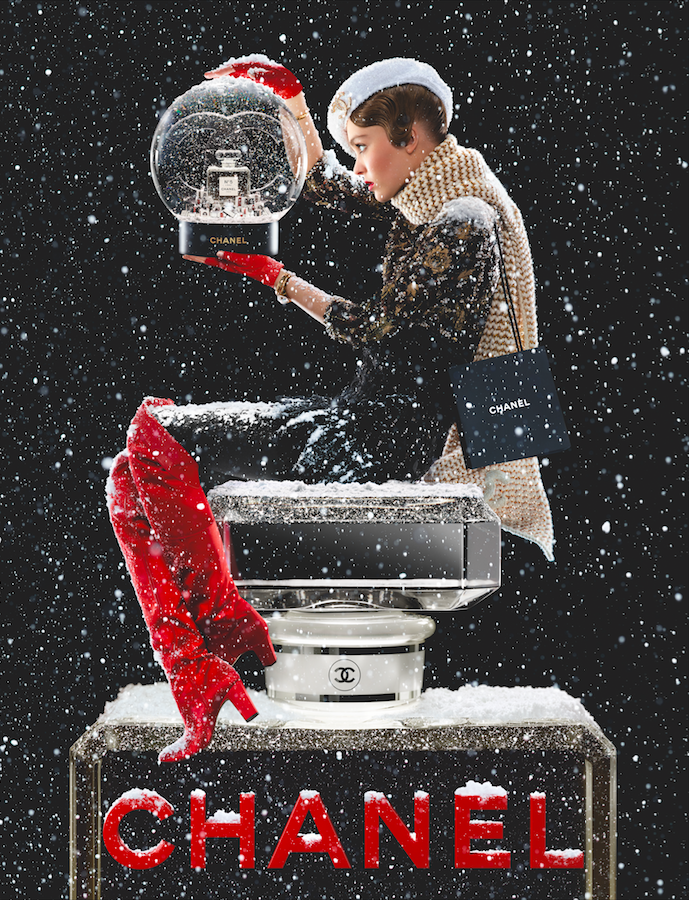 Wearing a festive dress, fingerless gloves and red boots, Lily-Rose Depp looks fresh from a 1940s movie with her crimped hair and popping red lip. Sitting on a giant fragrance bottle, Depp gazes into a large snow globe and sees a pile of festive gifts, Amongst this, she discovers her favour fragrance N°5 L’EAU. The model dances in the snow, before becoming immersed in a Broadway musical-like scene. The happiness and spirit of the holiday season are perfectly captured through Depp’s playful personality. “I loved playing the character created by Jean-Paul. The joy and wonderment reminded me of how I felt as a little girl on Christmas morning,” remembers Lily-Rose Depp.

Jean-Paul Goude added; “For me, Lily-Rose incarnates the freshness and vivacity of a young girl, mixed with the maturity of a seasoned actress… with this film, we wanted an experienced actress to play a purely commercial message in a natural and spontaneous way, something that Lily-Rose accomplished brilliantly.” 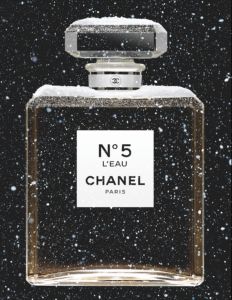 The oversized fragrance bottle is a key feature of CHANEL advertising campaigns, but it is also part of the director’s creative signature: the artist had the three- meter-high bottle specially created for the film, along with the giant double C in the background to heighten the magic of his story without having to use special effects. Augmenting reality as opposed to virtuality to create an amplified sense of magic is one of Jean-Paul Goude’s favourite techniques.

While the touches of red on Lily-Rose Depp’s accessories and the CHANEL name recall the lively colours of Jean-Paul Goude, they are also a nod to the longstanding tradition at CHANEL of slipping this hue into its iconic fragrance campaigns… They are also a tribute to the “colour of life, the colour of blood” in the words of Gabrielle Chanel, as well as to the femininity, passion and daringness embodied by Lily-Rose Depp.

See the new campaign throughout the festive season. #CHANELHoliday